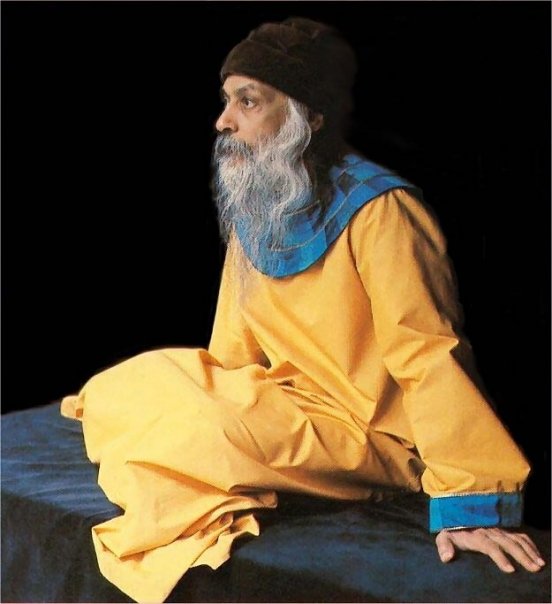 Osho : Bhuribai is very closely connected with me. I have come to know thousands of men, thousands of women, but Bhuribai was unique among them. Bhuribai’s mahaparinirvana — her death attaining the highest liberation — happened just recently. Count her with Meera, Rabiya, Sahajo, Daya — she is qualified to be among these few selected women.

But as she was illiterate, perhaps her name won’t ever become known. She was a villager, she belonged to the country people of Rajasthan. But her genius was unique; without knowing scripture she knew the truth.

It was my first camp. Bhuribai was a participant in it. Later she also participated in other camps. Not for meditation, because she had attained meditation. No, she just enjoyed being near me. She asked no question, I gave no answer. She had nothing to ask, there was no need to answer. But she used to come, bringing a fresh breeze along with her.

She became inwardly connected to me in the very first camp. It happened. It wasn’t said, it wasn’t heard. The real thing happened! She attended the first lecture… the words and events of the camp that Bhuribai participated in are collected in a book called The Path of Self-Realization. It was the first camp; only fifty people participated.

It was in Muchala Mahavir, an isolated uninhabited ruin in far Rajasthan. Kalidas Bhatiya, a High Court advocate, was with Bhuribai. He served her. He had left all: law practice, law court. He washed Bhuribai’s clothes, he massaged her feet. Bhuribai was aged, some seventy years old. Bhuribai had come, and Kalidas Bhatiya and ten or fifteen of her devotees came.

A few people recognized her. She listened to my talk, but when the time to sit in meditation came, she went to her room. Kalidas Bhatiya was surprised, as they had come for meditation. He ran over there and asked Bhuribai, “You listened so attentively to the talk; now when the time to do it has come, why did you leave?” Then Bhuribai said, “You go, you go! I understood it.”
Kalidas was very surprised. If she has understood, then why doesn’t she meditate?

He came and asked me, “What’s the matter, what’s going on? Bhuribai says she understands, so why doesn’t she meditate? And when I asked her she said, ‘You go, ask Baapji himself” — Bhuribai was seventy years old, but still she called me Baapji, father — “‘You go, ask Baapji.’ So I have come to you,” Kalidas said. “She doesn’t say anything, she smiles. And when I started to go, she added, ‘You don’t understand a thing. I understood it!”‘

Then I said, “She is right, because I explained meditation — it is non-doing. And you went and told Bhuribai to come and do meditation. She will just laugh — doing meditation? How to do it, when it is non-doing? I explained also that meditation is just becoming quiet, so she must have thought it’s easier to be quiet in her room than in this crowd. She understood well.

And the truth is she doesn’t need to meditate. She knows silence. Although she doesn’t call it meditation, because meditation has become a scholarly word. She’s a simple direct village woman, she says, chup! — silence! ”

When she returned home after the camp, she asked someone to write this sutra on the wall of the hut:
Silence the means, silence the end, in silence, silence permeates.
Silence, the knowing of all knowing: understand it, you become silence.

Silence is the means, silence is the end, in silence only silence permeates. If you would understand, if you want to understand, then only one thing is worth understanding — silence. The moment you know it, you become silent. There is nothing else to do: Silence, the knowing of all knowing.

Her disciples told me, “She doesn’t listen to us. If you tell Bai, she’ll accept what you say. She’ll never refuse you, she’ll do what you say. You tell her to have her life’s experience written down — she can’t write because she’s unschooled. Still, whatever she has known, have it written down. Now she’s old, the time for her to depart is coming now. Have it written down; it will be helpful for people coming later.”

I asked, “Bai, why don’t you have it written down?”
Then she replied, “Baapji, if you say so, it is good. When I come to the next camp, you yourself can release it. I’ll bring it written down.”

At the next camp her disciples waited eagerly, with great excitement. She had put the book in a chest and had it sealed. She had a lock put on it and brought the key. Her disciples lifted the chest on their heads and brought it to me. They asked me to open it. I opened it and took out a booklet, a tiny little booklet of some ten or fifteen pages; and tiny — about three inches long by two inches wide. And black pages without any white!

She said, “Only you can understand. They just don’t get it. I told them, ‘Look. Other people write. They write a little — they are educated, they can write only a little. I am unschooled, so I wrote on and on, wrote out the whole thing. I didn’t leave any space.’ And how to have someone else write it? So I just went on writing, went on marking and marking and marking — made the whole book totally black! Now you present it.”

And I did present it. Her disciples were very surprised. I said, “This is real scripture. This is the scripture of scriptures. The Sufis have a book, it is a blank book. They call it The Book of the Books. But its pages are white. Bhuribai’s book has gone beyond this. Its pages are black.”

Bhuribai never used to say anything. When someone used to come and ask her, “What should I do?” she would just make the gesture of touching her finger to her lips — “Just remain silent. nothing else needs to be done.”

Her love was amazing. She had her own way, unique! She doesn’t have to return to this world. She has gone forever. In silence, silence permeates. She has dissolved. The river has diffused into the ocean. She didn’t do anything, she just remained silent. And whoever went to her house she served them. She served them in every way — and silently, quietly. She was an amazing woman.