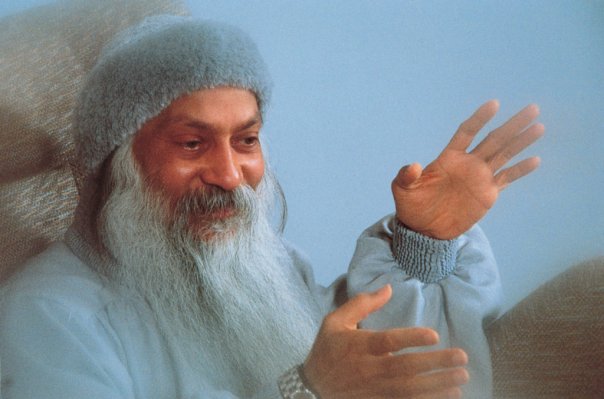 Osho – Enjoy simple things with total intensity. Just a cup of tea can be a deep meditation. If you can enjoy it, the aroma of it, slowly sipping it, the taste of it… who cares about God? You don’t know that God is continuously feeling jealous of you when he sees you drinking a cup of tea and the poor fellow cannot have it. Instant coffee… these things are not available in the Garden of Eden.

And since Adam and Eve left, there is no human company at all — just living with animals, who don’t know how to make tea. God is very jealous of you and very repentant that he drove Adam and Eve out of the Garden of Eden, but now nothing can be done about it. The sons and daughters of Adam and Eve are living far more beautifully, far more richly.

Enlightenment happens when you have forgotten all about it. Don’t look even out of the corner of your eye, just in case enlightenment is coming and you will miss it. Forget all about it. You just enjoy your simple life.

And everything is so beautiful — why create unnecessary anxiety and anguish for yourself? Strange problems of spirituality…. Those things are not something you can do anything about. If you can make your ordinary life a thing of beauty and art, all that you had always desired will start happening of its own accord.

The story is that one beautiful man, enjoying life, every bit in its totality, was so contented and so fulfilled that Krishna decided to appear before him. Ordinarily there are people who are singing and dancing their whole life, “Hare Krishna, Hare Rama” and neither Rama appears nor Krishna appears — nobody appears.

And this man was not bothering about Krishna or Rama or anybody. He was simply living his life, but living it the way it should be lived — with love, with heart, with beauty, with music, with poetry. His life was in itself a blessing, and Krishna has to decide that “This man needs a visit from me.”

You see the story — the man is not at all thinking of Krishna — but Krishna, on his own part, feels that this man deserves a visit. He goes in the middle of the night, not to create any trouble in the whole town. He finds the door open and he goes in.

The man’s mother is very sick, and he is massaging her feet. Krishna comes behind him and says, “I am Krishna and I have come to give you an audience, a DARSHANA.”
The man said, “This is not the right time; I am massaging my mother’s feet.”

Meanwhile, just by his side there was a brick; he pushed the brick back — he did not even look back to see who this Krishna is — he pushed the brick and told him to stand on it, and that when he is finished with his work he will see him. But he was so much absorbed in massaging the mother’s feet — who was almost dying — that the whole night passed, and Krishna remained standing there.

He said, “This is a strange stupidity. People are singing their whole life, `Hare Krishna, Hare Rama’ and I never go there. And I have come here and this fool has not even looked back, has not even said to me, `Sit down’ but tells me to stand on the brick!”

And then it was getting light, the sun was rising, and Krishna became afraid, because people would be coming in. The road was just by the side of the house, and the door was open — and if they saw him standing there, soon there would be trouble, great crowds would come. So he disappeared, leaving just a stone statue of himself on the brick.

When the mother went to sleep, then the man turned and said, “Who is the fellow who was disturbing me in the night?” And he found just a statue of Krishna.

The whole village gathered — this was a miracle, what had happened? He told the whole story. They said, “You are a strange fellow. Krishna himself had come, and you are such a fool! You could have at least told him to sit down, offered him something to eat, something to drink. He was a guest.”

The man said, “At that time there was nothing by my side except this brick. And whenever I am doing something, I do it with totality. I don’t want any interference. If he is so much interested in being seen, he can come again, there is no hurry.”

That statue remains in the temple of Bitthal, still standing on a brick. But the man was really a great man — not bothering about rewards or anything, absorbed so fully in every action that the action itself becomes the reward. And even if God comes, the reward that is coming out of the totality of action is bigger than God.

Nobody has interpreted the story the way I am interpreting it, but you can see that any other interpretation is nonsense. So just forget about spirituality, enlightenment, God — they will take care of themselves. That is their business. They are sitting there without customers.

One thought on “Osho on Bitthal temple and Lord Krishna”