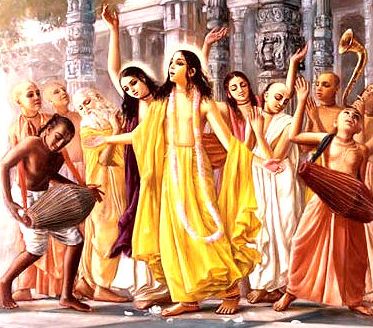 Osho : Krishna comes at the pinnacle of a rationalist, intellectual culture that had left no stones unturned. We had thought everything that could be thought. From the VEDAS and Upanishads we had traveled to vedant where knowledge ends. VEDAS itself means the end of knowledge. Giants like Patanjali, Kapil, Kanad, Brihaspati and Vyas had thought so much that a time came when we felt tired of thinking.

Then comes Krishna as the culmination, and he says, “Let us now live, we have done enough of thinking.”

In this context it is good to know that Chaitanya happened in Bengal exactly at a similar time. Bengal reached the zenith of dialectics and reasoning in the form of the navya nyaya, the new dialectics. Navadip, the town in which Chaitanya was born, was the greatest center of learning and logic. It was called the kashi of the logicians.

All logical learning of India found its apex in Navadip, and it became known as navya nyaya, which represents the Everest of dialectical reasoning. The West has yet to reach that peak. Western logic is old; it is not new. It does not go beyond Aristotle. Navadip took logic beyond Aristotle and carried it to its last frontier.

It was enough to say anywhere in the India of those days that such-and-such a scholar comes from Navadip – nobody dared enter into a debate with him. He was supposed to be invincible as a dialectician; nobody could think of defeating him in polemics. Students from all over India went to Navadip to learn logic.

Scholars of logic went there to debate with their counterparts, and if once someone won a debate he immediately became famous all over the country; he was acclaimed as the greatest pundit – the scholar laureate of India. Often enough it happened that someone who went to Navadip to debate got defeated at the hands of some scholar and became his disciple.

It was impossible to defeat Navadip; the whole town was full of logicians; every home was the home of a scholar. If someone defeated one scholar there was another round the comer ready to challenge him. The town was a beehive of scholars.

Chaitanya was born in Navadip, and was himself a towering scholar of logic. He was the top logician of the Navadip of his time, held in great respect by all. The same Chaitanya one day said goodbye to scholarship and went dancing and singing ecstatically through the streets of Navadip saying that everything is unthinkable.

When such a person says something it is bound to have tremendous significance. Chaitanya too represents the climactic point of a great tradition. After exploring and analyzing every nook and comer of thinking and intellectual understanding, after going to the very roots of words, concepts and their meanings, he renounces knowledge and returns to his basic ignorance and declares he is now going to sing and dance like a madman.

He said that he would not argue any more, not search truth through logic, he would simply live and live with abandon. Life begins where logic ends.

One thought on “Osho on Chaitanya Mahaprabhu, Osho on Navadip”