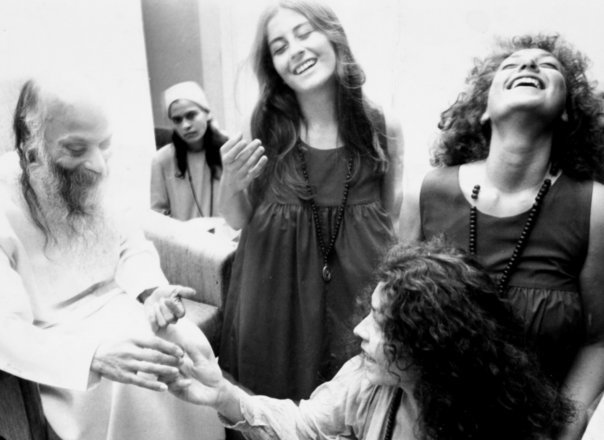 Question : Beloved Osho, It always amazes me how chemicals can have such a drastic effect, not only on the body, but also on the mind. For example, my new birth control pill contains double the amount of estrogen as my old one; and immediately upon taking it, it threw my body and personality into chaos — not just physical symptoms such as nausea, but also a sense of dullness and low energy, a brittle tenseness, and a feeling of being completely “off”. It is so frustrating to feel so helpless in the hands of a few chemicals and hormones. Yet i was amazed to notice that sitting with you in these meetings, all the symptoms disappear. They are there before and afterwards, but not while in your presence. What is it about you that influences even the action of chemistry? And is there something we and science can learn from this to help people be more independent in such circumstances?

Osho : Our whole structure of body and mind is made of matter. And unless you transcend your body-mind structure and become a watcher — beyond both — they will deeply affect your behavior, your thinking, your emotions, your sentiments. Hormones, chemicals or anything — they are the components of our body, but they are not the components of our consciousness.

That’s why, when you are sitting here with me, you forget all about the body, all about the hormones, and without your effort a certain transcendence happens. You reach a quality of silence, watchfulness. That’s why their effects are no longer felt — because you are far away, beyond the boundary line of their effect.

One Western seeker of truth, in the beginning of this century, was moving in the Middle East, in India, in Tibet, in Japan, in China, and he reported many strange experiences and people that he came across.

One of the men he describes is a very well-known Hindu mystic, Brahma Yogi. He became famous in the 1920s all over the world. His only quality was that he could drink any kind of poison, and no poison affected him. And he moved around the world in every university, every scientific lab to show the experts. And they were all puzzled, because poisons which will kill immediately… and that man was taking twenty, thirty times more and he was not even affected. He would not even become unconscious.

But in Calcutta he died just by accident. At Calcutta University he exhibited his capacity, drank the poison, but nobody knew his secret. His secret was simple. The secret was that he could keep his witness for thirty minutes without any wavering. In those thirty minutes he would drink the poison, finish the show, rush back to his hotel, and vomit everything.

And yogis know how to vomit — because that is one of the parts of their training — to drink water as much as you can and then throw it up. I have seen people drinking two, three buckets of water with living fish in the water; and then they will throw up the water, and the fish will come out alive.

Paul Brunton is the man who went around the whole of Asia finding out all these strange kinds of people. Naturally everybody was impressed, although there is nothing spiritual in it; the strategy was part of a spiritual technique which he was using for trivia, wasting his time.

If he had not wasted his time, if he had continued to practice witnessing — forty-eight minutes is enough. One who can be a witness for forty-eight minutes continuously, without any coffee break — that man has gone beyond the body-mind complex. Now he can live, but he is living almost above his body, not within his body.

But out of old habit we immediately fall back — get identified with the body — and then anything that the body feels, we think we are feeling. Now we have lost the distinction.

But for your inner self it is worth remembering that you are always a watcher, you never feel; the body feels and you watch, and you are like a mirror. The body feels and the mirror reflects, but the reflection does not change the mirror, it does not leave any marks on the mirror. The mirror remains pure. Then you can be having immense trouble with the body, and yet you can remain calm and quiet. You know that there is trouble and there is pain, but you are simply a watcher. Learn the art of watching, and you have learned all the religion there is.

Source – Osho Book “The Transmission of the Lamp”