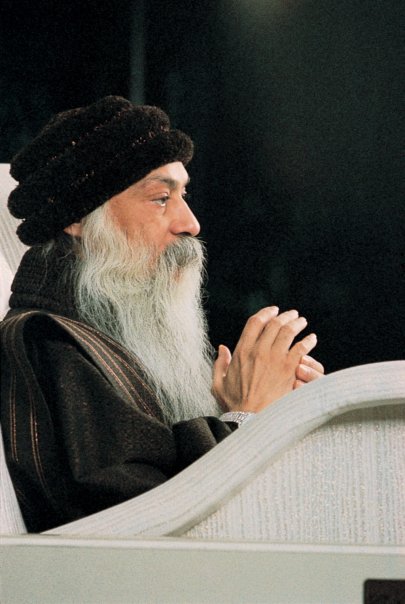 Question – Beloved Osho, everybody around is blissing out and this is the first time it is not happening to me. I want to feel you again and get lost. Right now, the connection is like a fragile, thin thread felt in some rare silent moments or shown by my tears. I’m still full of fear and also getting older. You gave me the name pravira — do i still have a chance this lifetime?

Osho – The chance to be transformed remains with you to the very last breath of your life. But the problem with you is that you are more concerned that others are being so blissful, that so much is happening to them, and you are comparing.

Comparison always brings misery, and misery becomes a great hindrance for anything to happen to you. So the first thing is: if it is happening to many people, drop the old habit of comparing and being jealous. On the contrary, make it a point that “If it is happening to so many people, it is going to happen to me also. Because they are just like me.”

We are all human beings. Nobody is superior and nobody is inferior. If it is not happening to you, you must be creating barriers so it cannot happen. The first barrier is comparison. The second barrier is… you say, “I want to feel you again…” The moment you start desiring something, desperately longing for something, your very desiring and longing becomes a barrier.

It is something to be understood by everybody: when people come to me for the first time, they don’t have any expectations, and things are very easy. Miracles are triggered in their being. But the next time they come to me, they come with expectations. Now the whole psychological set-up has changed: first they had come without any expectations, just available, just to see whether something happens or not. Now they come with a determined desire that it should happen. It has happened before, why is it not happening now?

It has happened before because you were in a totally different space. You were not desiring it; it happened in your innocence. Now you are no longer innocent — you are full of desire, full of wanting. And with desire and wanting there is comparison on the side, that “It is happening to others.” So you are creating misery around yourself. There is no need to compare, for one thing. You should rejoice that it is happening to so many people. They are also part of us. If it is happening to them, you should join the dance.

Rather than being in competition and hiding in a corner with tears because it is happening to everybody; everybody is dancing… who is preventing you? Join the dance! And if you want to cry, let the tears be of joy that so many people are happy — even if you are not happy, then too, it is something to be rejoiced. Rejoice for others. And drop the idea that it should happen to you again. The moment you drop the idea, it will start happening because you are again innocent.

But tired with the effort, you go into the garden, start watering the plants and suddenly it is there. When you were trying, it was not there. When you forget all about it and start doing something else, suddenly it is there. There is a deep psychological fact in it: When you are tense and trying hard to remember something, your consciousness becomes very narrow. And in that narrow space, the name that you want to remember… you feel it is there but it is being hindered by many other things, other memories. And the passage has become so narrow that it cannot get out of that passage.

You forget about it; you start doing something else. Your consciousness relaxes. It becomes wider, the narrowness is gone. And with a wide consciousness, the name can find a way out. With a narrow consciousness, it is very difficult — so many other memories, so many other names are hindering the way. The same happens with blissfulness, silence, peace, joy. You have known it, and because you have known it, you want to know it again. Now it has become a desire, and you are tense that it is not happening and everybody else is enjoying. So you are full of tears, you think something has gone wrong.

Nothing has gone wrong; you just have to understand. Drop the desire, so that you are again back in the same space in which it happened before — there was no desire — and join the dance, join the song.
Blissfulness is very contagious. If you join the people who are joyous, you will suddenly feel that your own joy, which was asleep, has awakened. And then tears are not wrong — you can dance, you can sing, and you can have tears of joy.

But tears of misery… and particularly in this place — you can go to any church. Whenever you want to be miserable, the churches are basically meant for that. Entering a church you suddenly become sad. You cannot laugh in the church, you cannot dance. And look at poor Jesus, hanging on the cross. Just seeing him and his long, British face… I have always wondered why he was born in Judea. England was the right place! I don’t think that he ever laughed in his life, he was so serious…

And naturally, you cannot expect a man to laugh when you are crucifying him. Even the sculptors and the painters cannot paint him laughing, otherwise it will look so absurd — “Is it a joke? Is it a real cross?” So he is, poor fellow, keeping his face very serious — in tune with the cross. The whole atmosphere in the church is created by Jesus and his crucifixion. So whenever you want to be miserable… once in a while, one enjoys being miserable, it feels good. Go to some Catholic church. Weep and cry — that is allowed. Just don’t laugh in between. Don’t even smile.

Because the American government is pressuring the Indian government that sannyasins from other countries should not reach me, I have told my sannyasins, “Use all the colors. It was only a device; it has worked. In five years we made the movement international. Now there is no need.”

But whenever you apply for a visa, be very serious. Be Catholic! You can even have Jesus Christ on the cross hanging around your neck — they will not suspect that you could be my sannyasin. But if you look joyous, smiling, happy, blissful — feeling great that you are going back to your master — they will prevent you. Just pretend a little bit.

You are saying, Pravira, “I am still full of fear, and also getting older.” In getting older, there is no problem — everybody gets older. Since the day you were born, you have been getting older. It is not a new problem.

And I have given you the name “Pravira”. Pravira means one who is very courageous. And the greatest courage in life is to live totally, in spite of all the priests and all the people who want you not to be joyous, not to be living totally.

And as far as you are asking, “Do I still have a chance this lifetime?” I cannot say anything about this lifetime but I can say you have the chance just now. Why postpone it for the lifetime? Because the older you get, the less is the possibility of being dead. Have you ever thought about it? At the age of ninety, very few people die. At the age of a hundred, even less people die. At the age of a hundred and twenty, nobody dies. So getting older is not a problem. People die at seventy, seventy-five, and then the number starts getting less and less. By the time they have made the century, then they don’t die.

So don’t be worried about getting older. Just be concerned with this moment, and this space that is being made available to you. And I still say you are courageous enough to take the jump. Drop your desire, drop your competition. Start singing and dancing, and suddenly you will find the climate has changed. The spring has come to you.

But it always comes when you are not asking for it.
Existence gives you everything; just don’t ask.
It gives only to the emperors, not to the beggars.

There are three big game hunters in the jungle in Africa: an American, an Italian and a Polishman. Suddenly they are captured by cannibals and brought before the chief. The chief tells them, “By tribal custom, I am required to allow each of you a chance to escape. And I have to give you any weapon of your choice. However, I must warn you: If we catch you, we are going to skin you and make a canoe out of you.”
Before they even get a chance to get their breath, the chief points to the American and asks, “You are first. What do you want?”
The American says, “I want a gun.”

The chief hands him a gun and the American takes off into the jungle. Well, pretty soon the gun runs out of bullets and the natives catch up to him. They shoot him with poison darts and within five minutes they skin him and make a canoe out of him. The chief points to the Italian. “You are next. What do you want?”
The Italian says, “I want a horse.”
The chief looks at him and says, “Well, that’s not really a weapon but if you want a horse, I will give you a horse.” So the Italian rides off into the jungle. However, he is very quickly surrounded by a thousand natives on all sides. The natives shoot him with poison darts, skin him and make a canoe out of him.
Finally, the chief looks at the Polish guy. “What do you want?”
The Polish guy says, “I want a fork.”
“A fork?” asks the chief. “What do you want a fork for?”
“Look,” said the Polish guy, “you said I could have anything I wanted. Now give me a fork, alright?”
“Okay, okay,” says the chief, “here is a fork.”

Immediately the Polish guy takes the fork and starts stabbing himself all over.
The chief stares at him and exclaims, “What are you doing?”
The Polish guy laughs at him and says, “You are not going to make a canoe out of me!”

Just a little intelligence… and that much intelligence you can find even in a Polack. And I certainly believe that you are not a Polack. You must have more intelligence. Don’t destroy yourself unnecessarily because others are happy, because so much is happening to them and you are tense because something has happened to you before and you want it to happen again.

Something much more beautiful will happen to you if you can drop this tension and this desire and this competition.