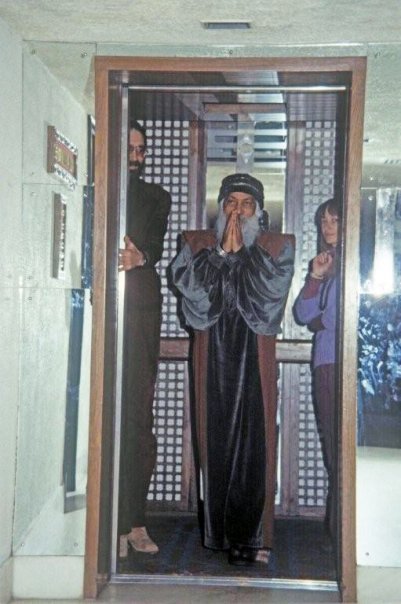 Question : Beloved Master, Your ideas seem to be crazy!
Osho : Thank you for the compliment. They don’t SEEM to be crazy, they ARE. But that is the only way God expresses himself. God’s ways are crazy. If the word `crazy’ does not look proper, you can say, “God’s ways are miraculous” — but it means the same. Translated rightly, miraculous means crazy. God is not a logician — he may be a singer, a poet. His ways are crazy. They are not like superhighways, they are more like footpaths in a forest — zigzag. On the footpaths you can go astray very easily: freedom is intact. On a superhighway you cannot go astray: freedom is not allowed — those milestones everywhere, they will hinder you.

God is crazy, truth is crazy, because truth is so vast, it cannot be reduced into a syllogism. You can sing about it, but you cannot argue about it — the moment you argue about it, you have falsified it. You can dance it, but you cannot make a dogma out of it. Yes, you are right. My ideas ARE crazy, because they are not MY ideas. I simply allow myself to be a hollow bamboo and whatsoever song God wants to sing on it, I allow him total freedom. I don’t stand in judgment. I don’t say: Don’t sing this sing, this will look crazy. I say: Okay, if you want to sing it, sing it. If it is crazy, it s crazy.

I have heard a true story, as told by Freeman Dyron… A few months ago, Werner Heisenberg and Wolfgang Pauli believed that they had made an essential step forward in the direction of a theory of elementary particles.

Both the names are world-famous: Heisenberg and Pauli — two of the greatest scientists of any time, and they were thinking that they had come across the basic theory to explain the structure of the elements.

Pauli happened to be passing through New York, and he was prevailed upon to give a lecture explaining the new ideas to an audience which included Niels Bohr — another famous name, another great name in science.

Pauli spoke for an hour, and then there was a general discussion during which he was criticized rather sharply by the younger generation of scientists. Finally, Niels Bohr was called on to make a speech summing up the argument. “We are all agreed,” he said, “that your theory is crazy, Pauli. The question which divides us is whether it is crazy enough to have a chance of being correct. My own feeling is that it is not crazy enough.”

And that’s how things really are. A very sane theory cannot be right, because a sane theory will be human. It will be very limited. Only a crazy theory has any possibility of being right, because crazy means that which transcends human limitations. Crazy means that which cannot be reduced to human logic, crazy means that which is beyond your understanding. Yes, right is Niels Bohr. Let me repeat: “We are all agreed, Pauli,” he said, “that your theory is crazy.” This much agreement is there. “The question which divides us is whether it is crazy enough to have a chance of being correct. My own feeling is that it is not crazy enough.”

If you look into the modern world of physics, you will be surprised. Those old days of clear-cut theories are all gone; the days of Darwin, Newton, Edison, are gone. Truth has erupted, exploded — in Einstein, Heisenberg, Pauli, Niels Bohr, Planck — and physics looks more and more like metaphysics; more and more like poetry and less and less like prose. The deeper scientists have penetrated into the world of physics, the more they are surprised to find that our logic is just irrelevant. Reality is more than our logic. It’s FAR more than our logic. Our logic is just a small piece of ground that we have cleared and cleaned, and reality is this great jungle of infinity.

Yes, you are right: my ideas ARE crazy because they are not MY ideas. If they were mine then there was a possibility I would have made them logical — it is not very difficult. I can deny those parts which look illogical, and insist on the logical. I can remain consistent; I can make a very clean-cut philosophy.

That is not difficult — in fact, that will be very easy. But I am not interested in consistency. I am not interested at all in logic, I am interested in truth. And if truth is crazy, I am crazy. If truth is mad, I am mad. And let that point be remembered by you all, because my whole effort here is to relax you so you can also become a little crazy; to help you relax, to help you loose the grip of the mind so the no-mind can penetrate in you; to put the human aside so the divine can have a chance in your being.

Don’t cling to the clear-cut. Truth is not so clear-cut, and cannot be. Truth is so vast, it contains contradictions. It is crazy.

God is mad. If you are ready to be a little mad, only then is there any possibility of any contact between you and the infinite. It has to be so. When the whole ocean drops into a drop, the drop is going to get crazy. When the infinite descends into the finite, how can the finite remain sane? It has to go mad. The old mystics have always called it “the divine madness.”

All meditation is an approach towards divine madness. Stake all human sanity. It is better to be mad in a divine way than to be sane in a human way. I am crazy.

One thought on “Osho on Crazy Ideas – God is crazy, Truth is crazy”