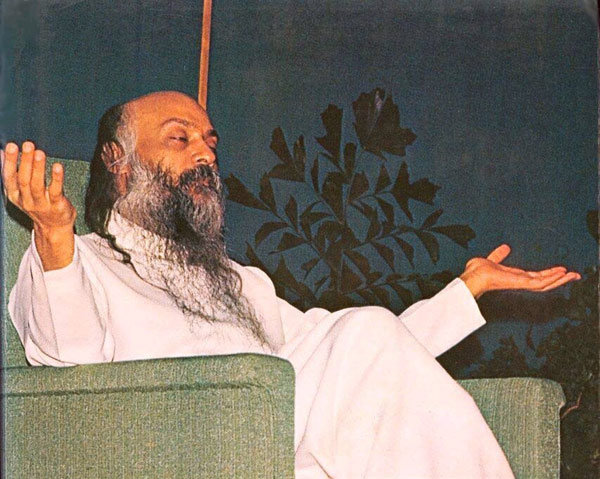 [A sannyasin returning to the west says: It doesn’t happen here, but at home by the end of the week I feel very tired. Sometimes I can’t even stand.]

Osho – I understand. Do one thing. Every night before you go to sleep, just sit in the bed and imagine an aura around your body, just six inches away from your body, the same shape as the body, surrounding you, protecting you. It will become a shield. Just do it for four, five minutes, and then, still feeling it, go to sleep. Fall into sleep imagining that aura like a blanket around you which protects you so that no tension can enter from the outside, no thought can enter from the outside; no outside vibrations can enter you. Just feeling that aura, fall asleep.

This has to be done the last thing at night. After it, simply go to sleep so the feeling continues in your unconscious. That is the whole thing. The whole mechanism is that you start by consciously imagining, then you start falling asleep. By and by when you are on the threshold of sleep, a little imagination continues, lingers on. You fall asleep but that little imagination enters the unconscious. That becomes a tremendous force and energy.

I don’t see that the problem is within you. The problem is coming from the outside. You don’t have a protective aura. It happens to many people, because we don’t know how to protect ourselves from others. Others are not only there – they are broadcasting their being continuously in subtle vibrations. If a tense person passes by you, he is simply throwing arrows of tension all around – not particularly addressed to you; he is simply throwing. And he is unconscious; he is not doing it to anybody knowingly. He has to throw it because he is too burdened. He will go mad if he doesn’t throw it. It is not that he has decided to throw it. It is overflowing. It is too much and he cannot contain it, so it goes on overflowing.

Somebody passes by you and he goes on throwing something at you. If you are receptive and you don’t have a protective aura…. And meditation makes one receptive, very receptive. So when you are alone, it is good. When you are surrounded by meditative people, very good. But when you are in the world, in the marketplace, and people are not meditative but are very tense, anxious, have a thousand and one strains on their mind, then you just start getting them. And you are vulnerable. Meditation makes one very soft, so whatsoever comes, enters.

After meditation one has to create a protective aura. Sometimes it happens automatically, sometimes it doesn’t. It is not happening automatically to you, so you have to work for it. It will be coming within three months. Any time between three weeks and three months, you will start feeling very very powerful. So in the night, fall asleep thinking this way.

In the morning the first thought has to be again this. The moment you remember that now sleep Is gone, don’t open your eyes. Just feel your aura all over the body protecting you. Do it for four, five minutes again, and then get up. When you are taking your bath and your tea, go on remembering it. Then in the daytime also whenever you feel you have time – sitting in a car or a train, or in the office doing nothing – just again relax into it. For a single moment feel it again.

Between three weeks and three months you will start feeling it almost like a solid thing. It will surround you and you will be able to feel that you can now pass amidst a crowd and you will remain unaffected, untouched. It will make you tremendously happy because now only your problems will be your problems, nobody else’s.

It is very easy to solve one’s own problems because they are one’s own. It is very difficult when you go on getting others’ problems; then you cannot solve them, because in the first place they don’t belong to you. Many people come to me and they say they had some problem but suddenly here it is gone. It was never their problem – otherwise it cannot go. It must have been somebody else’s.

They must have been step-fathering it, fostering it. It must have entered from somebody else’s mind. But people are so unaware that they don’t know what is theirs and what is the others. Everything goes on getting into a mess. You don’t have many problems, and you will be able to solve your problems; that is not a big thing. This time try to create a protective aura – and you will be able to see it and its function. You will see that you are completely protected. Wherever you go, things will be coming to you but they will be returned; they will not touch you.

Osho – One has to go inward. And you have roamed outward long enough