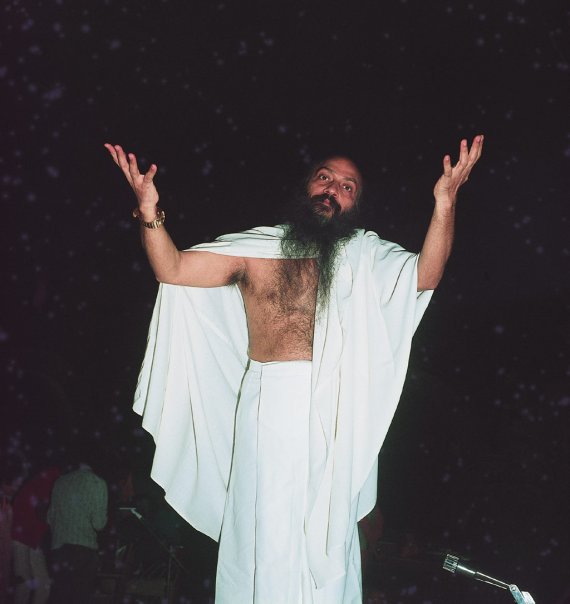 OSHO – Anand Kirti, CREATIVITY is when you are not, because creativity is the fragrance of the creator. It is the presence of God in you. Creativity belongs to the creator, not to you. No man can ever be creative. Yes, man can compose, construct, but can never be a creator.

When God is there, then creativity is simply a consequence of His presence, just His presence. You can attain to His presence through love or awareness, it doesn’t matter. How you annihilate yourself is irrelevant; the only thing is that you should be annihilated, that you should not be. Do it through love, that will do. How you commit suicide does not matter, with what kind of poison. Whether you jump from a cliff, or you lie down in front of a railway train, or you shoot yourself, or you hang yourself, it doesn’t matter. All that matters is that you should have committed the suicide of the ego: through love, through awareness; through Yoga, through Tantra, Taoism, Zen, Sufism, Hassidism. It doesn’t matter; these are different ways of committing suicide. I don’t mean the physical, I mean the metaphysical. Once you are not there, all that is left is God.

It has nothing to do with the path. Creativity is possible only when the goal is achieved; it is a by-product of the goal. And don’t start thinking in terms of a cross-breeding; cross-breeding is dangerous. You are thinking, “Or is it a child of both?”

There are people who need not even go on any path, love or meditation. Just the sheer intelligence is enough, just seeing the point is enough. Just seeing, “How can I be? I cannot exist alone, separate. I cannot exist as an island. I am continuously connected with the whole. I am breathing from every pore of my body; even if for a few seconds the breathing stops, I will be no more.”

If one is REALLY intelligent, then neither love nor meditation — just intelligence is enough. Just to see the point that we are one with existence, hence there is nobody separate, and the ego is gone. And the going of the ego is the coming of God. In fact, God is always there; just because of the ego you cannot see Him. And to see yourself as divine, as part of this immense existence, is the beginning of creativity.

And this is not only the experience of the mystics. Of course this is the experience of all the mystics of the world: you can ask Kabir or Eckhart, you can ask Farid or Mansoor, you can ask Lieh Tzu or Rinzai. You can ask different kinds of mystics, born in different times, to different races, in different countries, unaware of each other’s existence, and they will all say one thing: “The moment I disappeared, God came in. Or maybe He was already there; just my presence was not allowing Him to express Himself, to become manifest. I was obstructing the way.”

But this is not only the experience of the mystics. Even the poets, the musicians, the painters, have a few glimpses of it — of course only glimpses, then they fall back to the ordinary world. They rise to the sacred for a few moments.

And those who saw him coming out after three, four days of remaining in some other world all noted one fact: he looked so different, so fragile, so unearthly, so light, as if not made of matter, so subtle, nothing gross in him, his eyes so clear and so deep and his whole being so transparent. But after a few hours he would be back again, settled in the gross body, would be his old self again.

People used to ask him, “What happens when you close yourself in?” He would say, “I close myself in, I lock myself in, so that nobody disturbs me, because I am no more here. Any disturbance can be a very shattering experience. I am so fragile that I would not like to be disturbed. Even a little sound is enough to bring me back to the earth, and those are the moments when I am flying high, when great poetry arises in me.”

That’s how GITANJALI was born, the book for which he got the Nobel Prize. Many, many people have been given the Nobel Prize, I have seen almost all the books for which a Nobel Prize has been given, but there is no comparison with Rabindranath’s GITANJALI. ‘Gitanjali’ means ‘offering of songs’. It has some totally different quality, not of this world. It echoes something of the Upanishads. It has some reflections of Buddha, Jesus, Zarathustra, Lao Tzu. But Rabindranath was not a mystic, he was only a poet.

You ask me, ” WHAT IS CREATIVITY?”

So creativity has nothing to do with creating something, creativity is simply the presence of God. Those who are fortunate enough to come in contact with a buddha’s silence will be transformed; they will know what creativity is. He has not done a thing and miracles have happened. He has not uttered a word and the message has been heard. He has not moved, but he has transformed you. He has not even touched you, and you are no longer the same.

At the ultimate peak of being a mystic, creativity is just a climate. Lower than that is the poet; then creativity brings great songs, sculpture, architecture, poetry, music, painting. And even the scientist, the lowest in this categorization — lowest because he works with the lowest form of existence, matter — even the scientist, when he is creative, has a few glimpses like the mystic.

For example, Albert Einstein: he has said many times that “All my insights happened when I was not working at all, in fact when I was not. All my great insights came to me from some unknown source.”

The great scientist, Eddington, has said, “When I started working as a scientist I used to think of the world as matter, as only matter. But the more deeply I went into it, the more a few things started happening to me which are incomprehensible in terms of science, mathematics, calculation, measurement. And those things have revealed one thing to me: now I can say that the world resembles more a thought than a thing.”

The scientist is one who very rarely, but still, reaches to the peaks of the mystic. The poet is a visitor there more often, and the mystic remains there. For the mystic creativity is a climate, for the poet it is great activity, for the scientist even moreso: it is materialization of something which is immaterial, great work. It took almost twenty years for Albert Einstein to formulate the Theory of RelativitY — GREAT work. The insight happens in a split second, but then you have to work it out, you have to prove it through experimentation.

The poet needs no proofs; you never ask for proof The scientist is asked for proofs, experimental proofs, and the experiments may take years. Sometimes it has happened that the insight is there but the experimentation has taken years and years. Still a few of Albert Einstein’s theories are not yet proved by experimentation. They are just theories, with every possibility of being proved true, but with no way to prove them this way or that, for or against. Still no experiment is possible.

Now this is simply a theory, an insight; we have not yet been able to devise a spaceship which can move with that speed. But scientists say that theoretically it seems right — but only theoretically. Now how did Einstein arrive at it? — because there is no possibility for experimentation. Obviously, it is not the conclusion of an experiment; you cannot do any experiment. No spaceship is there which moves with such speed. In fact, it may never be possible to have such a spaceship; there are difficulties.

The most difficult thing is: whenever a thing moves at that speed it turns into light. At that speed the heat is so much that no spaceship can move at that speed, because the heat would burn it out. Just the friction — one hundred and eighty-six thousand miles per second — the very friction would be enough, and the spaceship and the passengers would all be reduced to light, they would burn out. But maybe some day we can find something which does not burn out, which remains intact, and the passenger can move at that speed.

Now this is a pure theory; they call it ‘pure physics’. How did Einstein arrive at it? It is an insight, it is a mystical experience. Albert Einstein had a few mystical experiences. All his other theories were also conceived in the same way; they have all been proved right, slowly slowly, by experiments. Maybe this too is right.

The Upanishads say AHAM BRAHMASMI, I am God! Al Hillaj Mansoor declares ANA EL HAQ! I am the Truth! These are not conclusions, these are not arrived at through thought processes. These are intuitions, experiences of the ultimate revelation. Mansoor had become one with truth; he was no more separate.

So creativity has three layers; the ultimate is the mystic: he lives in a climate of creativity. The poet, once in a while, brings some treasures from the beyond; the scientist, also very rarely, but whenever he can visit the ultimate he brings something precious to the world. But one thing is certain — mystic, scientist or poet, whatsoever comes into this world comes from the beyond.