Osho – Death has to be understood, because death is the goal of life 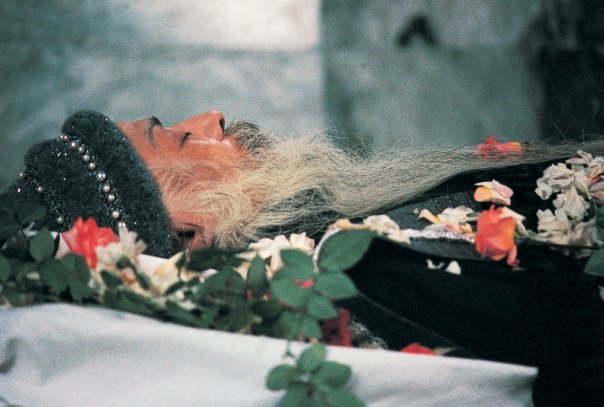 But we have been taught to avoid the fact of death; we don’t talk about it, we don’t think about it. The very idea gives shivers; a trembling arises in the being and we want to be occupied somewhere else. When somebody dies you feel a little embarrassed. It looks like this is not the thing to be done — why should he die? Anybody’s death brings you again and again to the awkward situation, and the awkward question arises in your being: ‘One day, am I also going to die?’ — and that you want to avoid.

The East has not avoided anything. That’s the beauty of the Eastern psychology: Whatsoever is, IS — and it has to be looked into. Death is, so death has to be looked into, it has to be faced. And you will see that a person who avoids death will be avoiding life also, because there is only one way to avoid death — to avoid life, otherwise life is always leading you towards death. Whatsoever you do, you are going towards death…. Don’t do anything: the only way to avoid death is to avoid life.

There are a few people Lying in underground, air-conditioned chambers in America, who have died. But they have made a will that their money should be used to protect their body, because there is a rumour in scientific circles that within twenty years it will be possible to revive a person. So they have made a trust-fund out of their whole properties. It is very costly — almost ten thousand dollars per day — but their bodies are being taken care of so that nothing goes wrong. So after twenty years, when science becomes capable of reviving them, they will be revived. Now these twenty years… and even after twenty years when you are revived, what are you going to do? You will repeat the same foolishness that you were doing before. You will again start chasing women, and competing in the market, and arranging money to die and be protected again. What is the point of it all?

Man is so afraid of death. The East says that death has to be looked in the eyes, death has to be looked into deeply. If you can look. if you can encounter death, in that very encounter you transcend death. You come to know that there is some element in you which is beyond death. Avoiding death, you remain under the control of death: facing death, you transcend death.

Whenever you are talking about death, danger, you are always leaving yourself out of it. That is no way to encounter, that is no way to face, the reality and truth of life. If death is, death is — what is the point of avoiding it? Look at it. The sooner you look, the better.

The East says that by looking deeply into death, you transcend death; suddenly, you become aware that one who can look into death is beyond death. Deep meditation brings you to the moment of death voluntarily and consciously. Meditation is a death: one dies and is reborn again. One dies from the world of phenomena, and one is born into the world of noumena. One dies to the temporal, and one is born into the eternal. When you come back from your deep ecstasy in meditation, your whole life is transformed Then you live without fear, because there is no death. But from the very childhood we are making people afraid. From the very childhood everybody is protecting himself — we even contaminate children’s minds.

One Sunday at the zoo, Bill and his father stopped before the lion’s cage.
‘Here’s the king of the beasts’ said his father.
‘Why do you call him that, Daddy?’
Well, he’s the big shot. He can lick any other animal. He’s a real man-eater too.’
‘You mean he would even eat you?’ asked the boy.
‘I guess he would — if he got out.’
Bill studied the lion with interest. Finally, he turned and looked up at his father.
‘Daddy’ he whispered ‘if he does get out, what bus should I take home?’

Nobody thinks, not even a child thinks, that death will not leave him — he will be left out OF it. It will take Daddy and he will have to go home, so ‘What number bus?’ There is something in the human mind that keeps away from death, and there is a reason in it, there is a cause, because mind is going to die. YOU ARE NOT GOING TO DIE. But don’t misunderstand me. When I say you are not going to die, I am talking of something inside you which you are not aware of.

Your mind is going to die. That’s all you have known about yourself, and even that you have not known totally, only a fragment of the mind you know. Your mind is going to die, your mind is not eternal: it is a time-phenomenon, it is born and it dies. Your body is going to die: it is a constructed thing; it is the meeting of your father and mother; it is accidental. But you, you existed before your father and mother had ever met, and you will exist when your body has gone into the earth — disappeared, ‘dust to dust’. You will exist. But that you, you have not known yet.

The East says: That element can be known only when you encounter death, when you face death, when you accept the challenge of death. Then you will see that deep inside, body is gone, mind is gone, ego is gone. And if you remain courageous and go on facing the fact, you will come to a moment when suddenly you will see that all is gone and Yet you are. And this is your reality. This is the answer to the question ‘Who am l?’