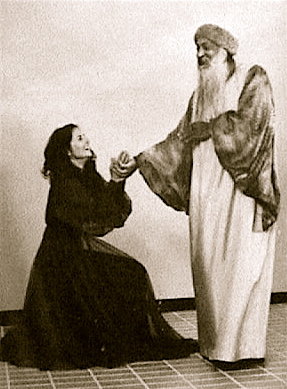 Dipankara said to Gautama, “You need not think in terms of learning. Truth is already in you. Truth cannot be transferred.” Not only this, but when Gautama touched the feet of Dipankara, Dipankara bowed down and touched the feet of Gautama. Gautama was not enlightened in those days. He was very puzzled, embarrassed too.

There was a great assembly of monks; nobody could understand what was happening, what was going on. Dipankara had never done that to anybody else. And Gautama said, “What have you done? Why have you touched my feet? I am a sinner, an ignorant person. To touch your feet is right, but you touching my feet is absurd. Have you gone mad?”

And Dipankara laughed again and he said, “No, Gautama. You are puzzled because you don’t know your future. I am not mad. I can see it happening — you will be a Buddha soon. Just to honor that fact I have touched your feet. And moreover, for one who is enlightened all are enlightened. It is only a question of time. It doesn’t matter much. I have become enlightened today, you will become enlightened tomorrow, somebody else will become enlightened the day after tomorrow — it doesn’t matter. Enlightenment is going to happen to everybody, to every being. You can go on delaying it, that is up to you. The moment you stop delaying, the moment you stop postponing, it is there. It has always been waiting for you to recognize it.”

It is one of the most beautiful stories — that Dipankara touched the feet of Gautama. And Gautama was an unknown man. After centuries, nearly three thousand years afterwards, Gautama became enlightened. The first thing that he did was he bowed down to Dipankara. Then there was no Dipankara, but he bowed down and he laughed and he said, “Now I understand why you touched my feet. Now I can touch everybody’s feet. Now I know that the whole existence is going to be enlightened.”

Enlightenment is a natural happening. If we don’t hinder it, it is bound to happen. It is not that you have to achieve it, all that you have to do is not to hinder it. You hinder it in a thousand and one ways. You don’t allow it to happen. When it starts to happen you become frightened. When it takes possession of you, you cannot give that much possession — you shrink back, you withdraw. You come back in your tiny cell of the ego. There you feel protected, defended, secure.

Just a few days ago there was a question: “Why have you declared yourself to be the Blessed One?’ It is a drama. I have decided to play the part of the Blessed One and you have decided to play the part of disciples — but it is a drama. The day you will become aware you will know, there is no master and no disciple. The day you will understand, you will know that it was a dream — but a dream which can help you to come out of all your other dreams, a thorn which can help to pull out your thorns from your flesh, it can be instrumental — but a thorn all the same. A poison which can help you to drop your other poisons — but a poison all the same. Use it as a raft. That’s why I say it is a drama.

Dipankara was simply saying to Gautama, when he touched his feet, that this is just a game. You touch my feet or I touch your feet — it makes no difference. We are all enlightened, we are all gods. Not that I am god and you are not god — ALL is divine. Trees are gods, so are animals, so is everything, even rocks!