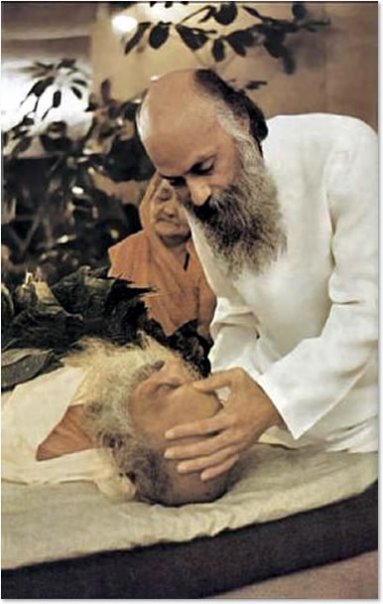 Question : Beloved Osho, Thoughts of death have been a frequent visitor during my disciplehood. How can a disciple die in a master’s presence, especially when the master is physically distant? Osho, is mahakashyap the only answer?

The fear of physical distance is the fear of lack of love and trust. Mahakashyap alone is not the answer. Everybody has to be an answer unto himself. Mahakashyap remained with Buddha, and after Buddha’s death he died; he could not survive separately. But that is Mahakashyap’s uniqueness. It is not the only answer.

I will tell you a few other stories around Buddha so you can understand. Ananda lived with Buddha for forty-two years. Nobody else lived with Buddha so long, nobody was allowed to live with him so long. But there was a problem. Ananda was Buddha’s cousin-brother, and older than him, and just the Eastern tradition…. Before taking initiation — Ananda was the elder brother — and he said to Gautam Buddha, “Siddharth” — Siddharth was his family name — “Listen: after initiation, whatever you say I will have to do. I will be your disciple, you will be my master. Right now I am your elder brother, you are my younger brother; whatever I say you have to do. Three things you have to remember — don’t forget them when I become a disciple.” It is a beautiful story.
Buddha said, “What are the three things?”

Ananda said, “First, I will always live with you; you cannot send me anywhere else to spread the message. Second, if I want anybody to meet you — even in the middle of the night — you cannot say no; that is my personal privilege. And thirdly, I will sleep in the same room where you sleep. Even in sleep, you cannot make me stay in a different place.”

Buddha promised, and these three conditions were followed for forty-two years. But Ananda did not become enlightened. You can understand his pain and his anguish — people who had come long after him became enlightened, and he remained in his ignorance just the same as before. The day Buddha died he said, “What will happen to me? I could not become enlightened even though I was with you for forty-two years, day in, day out, twenty-four hours a day. Without you, I don’t see any hope.”

Buddha died. And after twenty-four hours, there was a great meeting of all the enlightened disciples to write down whatever Buddha had said in these forty-two years. But the problem was that nobody had been with him continuously for forty-two years except Ananda — but he could not be allowed in the meeting because he was not enlightened. An ignorant man, unenlightened — you cannot rely on what he is saying, whether he heard it or imagined it, whether he has forgotten something, whether he has put his own interpretation in it. It is difficult.

And the scene is really tragic. The conference is inside a hall and Ananda is sitting outside on the steps crying, because he lived with Buddha for forty-two years; he knows more than anybody else. Each single moment he remembers, but he is unenlightened. Crying, sitting there outside the hall, something transpired. He had not cried his whole life. With those tears, his ego disappeared; he became like a child.

They opened the door to see whether Ananda was still sitting outside — because they had told him, “You sit outside. If we need some confirmation from you, we will ask you, but you cannot enter the conference.”
They saw a transformed being. The old Ananda, the old egoist was gone. An innocent being with tears of joy… and they all could see the light surrounding him.

They invited him — “You come in. Now there is no need for us to be worried. But it is strange… you could not become enlightened for forty-two years, and just after twenty-four hours you have attained that state” — and this was continuously emphasized by Gautam Buddha.
Ananda said, “It was my fault. His death became the death of my ego too.”

One of the disciples, Moggalayan, said, “I have to live now for my master’s message. I am not living anymore — I died with him; now he is living in me. That was one way, the way of Mahakashyap — to dissolve in Gautam Buddha. This is another way. I have also dissolved, but dying is not going to help anybody. And there are so many blind people in the world who need eyes, there are so many people in darkness who need light. I will live. I will live as long as it is possible; I will live for Buddha.”

So it is not a question of one person being decisive. Each person has to be unique in his own way. Somebody dies for the master, somebody lives for the master, and you cannot say who is greater — perhaps no comparison is right. Both are themselves.

Just remember one thing — your love. Then wherever you are, space and the distance in space does not matter. And at a certain depth, even time does not matter. And when time and space both are immaterial, then you have really touched the feet of the master. Then whatsoever transpires in you — to live for the message or to die, whatever comes naturally and spontaneously — let it happen.