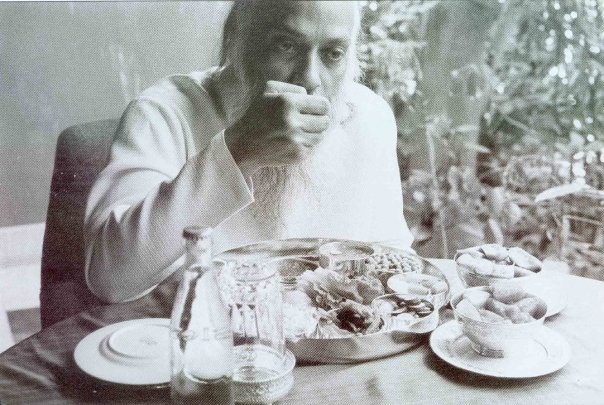 Question – So many dishes in the ashram kitchen contain onions. Remembering that Raman Maharshi said to avoid chillies, excess of salt, onions, etc, I am struck with the question: Is the kitchen sabotaging our possibilities of enlightenment?

Osho – That’s my whole work here. To sabotage all your possibilities of enlightenment. If your desire for enlightenment is not sabotaged you will never become enlightened. But don’t be angry at poor onions, they are innocent people. And they are as spiritual as you are, and far deeper in meditation than you can ever be. And I don’t believe that a man of the understanding of Raman Maharshi would have said it. But if he has said it then he must be joking.

To avoid real problems we create false problems. And there is something beautiful about false problems: they can be solved, easily solved. What is the problem? You stop eating onions. And you become spiritual and you are enlightened because you don’t eat onions. So simple. But not to be greedy will be difficult, arduous. Not to be an egoist is going to be an uphill task. You will need immense understanding. you will need great awareness. Only in the fire of awareness real problems will be burned.

You know you cannot solve those real problems. So the best way is, create false bogus problems and start solving them. This is one of the most basic tricks of the human mind. For example, India is suffering for centuries because of poverty. And Morarji Desai thinks prohibition will solve the problems. Now this is a false problem. Prohibition has no thing to do with it. Prohibition or no prohibition, the poverty will remain. The poor will become even more miserable, that’s all. Because through alcohol sometimes he can forget his suffering, sometimes he can drown himself. Once prohibition is there he will not have even that possibility to drown himself. Then his suffering will be utter. Or, Morarji Desai thinks if cows are not murdered, if cows are not butchered, then all problems will be solved. These are tricks of the mind. And this is how one can go on befooling oneself, for centuries.

India suffers because of these false prophets. And false prophets are those who tackle false problems. First they create a problem, then they start solving it. And they make much fuss about it and they seem to be much too active. If they fail, certainly nothing is achieved. If they succeed, then too nothing is achieved. But one thing, they can camouflage the real problem. They can focus your attention on something false, like a toy. It looks a real problem, it is not.

In my new commune I am going to have a bar also. And a smoking room. If tea can become a ceremony then why not smoking? If people can drink tea and make it a meditative process, so can be smoking. I am not saying you should smoke, I am not saying you should drink, but I am saying that these are not the things that prevent you from becoming spiritual. Jesus used to drink, Gurdjieff used to drink. That has not prevented them from becoming enlightened.

Remember, anything that prevents you from becoming enlightened is your knowing, your thought-process, nothing else. And there is the real task — how to drop the thought-process. And because you feel impotent there, you create small problems: how to eat only once a day, how to eat without salt, how to eat without ghee, how to eat this way or that way. Jaina monks eat standing. If you eat sitting, enlightenment is sabotaged. Jaina monks eat only once a day. If you eat twice, enlightenment is sabotaged.

And enlightenment does not come in parts. Either it comes whole or it doesn’t come. If twice a day is dangerous then once a day is fifty percent dangerous. You can eat thrice a day, it makes no difference. I am not saying eat thrice a day, because it is not going to help you to become enlightened either. It does not affect you, this way or that; it is irrelevant.

Don’t bring irrelevancies into your spirituality. Otherwise you will become obsessed with fads. And those fads are a kind of insanity, psychosis.

But these people become mahatmas — Morarji Desai is a mahatma. He does not drink wine but he drinks his own urine. And that’s perfectly good, that helps enlightenment. He would like everybody to drink his urine, that seems to be the cure for all the illnesses of this country. I think it is time he should graduate and go to the ultimate mahatmahood, he should start eating his…And that will solve the food problem.

People just become faddists. And it simply shows some neurosis, some psychopathology is in it. Sixty years ago, he came to know that a young man, completely drunk, had tried to rape his own sister. That has been his antagonism against alcohol. Now this has to be understood. Even in his antagonism against alcohol there is somehow sex involved. And drinking one’s own urine…he needs Freudian psychoanalysis. There must be some sexual repression in it, it is somehow an obsession with sexuality. And for almost fifty years he has been trying to remain a celibate. Now this too much concern creates all kinds of problems. Nothing is solved, more problems are created. But people will think he is a mahatma.

I would not like you to become a mahatma. If you can become simple innocent human beings, that is more than is required. Eat whatsoever feels good to you. Take care of the body, be respectful of the body. Be respectful how much you eat, don’t overburden the body, because that is a kind of anger, violence. And violence is so subtle that you have to watch it. When a person goes on stuffing himself he is being violent with his own body, he is destructive. Or he can go on a fast, then again he is violent. Just see the point of it. You can eat too much and you can be violent, and you can fast and you can be violent. Eating or fasting is not the question: Don’t be violent.

Love your body, respect your body, it is God’s shrine. But it is very easy to move from too much stuffing to fasting, because the mind always easily moves from one extreme to another, from one obsession to another obsession. First you go on stuffing your body and hurting it, loading it unnecessarily. Then one day you turn against it, you become the enemy of the body. As if it has been the body’s fault. Then you start fasting, and again you start torturing your body. But it is violence.

And violence is so deep in man that you have to watch it continuously, otherwise it will come from some other way. Morarji Desai goes to other countries — he is against innoculation, any kind of innoculation. Now this is violent. He can carry diseases from this country to another country and he can bring diseases from another country to this country. But he insists. And he is a non-violent man, a great follower of Mahatma Gandhi. But this is being very violent, disrespectful to people. Now this single man can create problems for a whole country. In fact he should not be welcome in any country of the world.

One can be in a very subtle way violent. Watch it. If you don’t like onions it is perfectly good, don’t eat them. But you need not condemn them. And if others like them, you need not think they are unspiritual or something. Don’t become spiritual so easily, don’t depend on such bogus things. Spirituality has only one taste and that is of awareness. Onion or no onion, chillies or no chillies, salt or no salt. Spirituality has only one taste, the taste of awareness. Stick to it! And don’t get distracted by small things.