Osho on Ecology and Esperanto, 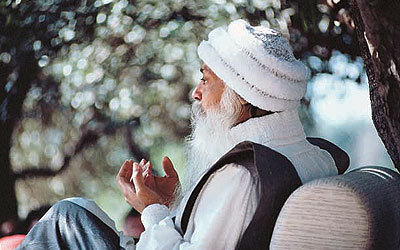 [A visitor says: I have spent a great deal of my time with some movements – one is esperanto, and another to do with ecology. I think they are very important for the world at the moment.]

Osho – They are good, the work is good and you can continue, but don’t get involved so much that you lose your own growth. These things are important, but not more important than you. Ecology is very good. Work for it, but look for the inner ecology also. Because as I see it, the outer ecology is being destroyed because the inner ecology has been destroyed. It is just an outcome. When man is no more whole inside – divided, in conflict, like a fighting mob, in a crowd – that man creates disturbance in nature also. And these are related.

When nature is destroyed and the natural systems are destroyed, then man is more destroyed. Then again nature goes on affecting man and man goes on affecting nature. It is vicious circle. But as I see it, the basic problem is somewhere inside man. If you are relaxed inside, if you have come to a settlement with your own nature, then you will be able to understand the natural functioning of the world, and you will not create any problem. You will not create any gap in it. You will see that everything is interconnected and nothing can be…. But the basic problem is inside man.

Continue your work – it is very important work, but one should never lose one’s own inner work, that’s all. Otherwise it is dangerous. It may happen, it may not happen, and there is more possibility that these mad politicians are not going to listen to anybody. Things have gone too far, and it seems that only a great catastrophe will stop it. Not that I am pessimistic, but just the actuality is such. The whole world is ruled by fanatic, violent people. And it has always been ruled by them, because a peace-loving person does not bother to rule anybody. He has no political ambitions. So all ambitious people are mad and insane, and they are always in key positions. They don’t understand anything… they understand only their ego.

When nixon was going to drop out of his presidential chair, the thought occurred to him that he could destroy the whole world. Now reports have come that for three nights he continuously pondered over it – should he resign or should he start a third world war? He could have done that. Rather than getting down from his chair, he could have dragged the whole world into a third world war, into total destruction. It was possible. It is a miracle that he decided to resign. But all mad people will not be so sensible. He proved sensible in a way. So go on working, doing whatsoever you can do, but never hope too much. Hope for the best and expect the worst. And meanwhile, go on working on yourself.

And esperanto is also beautiful work, but that too is almost hopeless. But work – it is good work, and man needs one language. So many problems simply arise because of language. Out of a hundred conflicts, ninety-nine can drop if one world language exists, because these problems are of communication. If people cannot communicate, then they fight. They have only one way to prove who is wrong and who is right – and that is war.

One day or other, humanity is going to learn. But I don’t think that moment has come yet. But go on working because that comes only that way. As I feel, some day or other, if some planet starts a war with this world, then esperanto will win, not before it. People will immediately start learning one language, because then they will have to fight. People have done things only when war was there. All these beautiful big roads, highways, super-highways, were made for war – not for people to travel on, not for lovers to meet and friends to meet together. No, they were created for militaries, armies to pass.

All that you see in the world has been more or less created for war. Other uses come later on, but the first use is war. The atom was created for war; now we think how to use it in a peaceful way. Esperanto will come into this world only when we are in conflict with some planet, and the whole planet has to be together, otherwise not. But go on working. The work is good and beautiful and religious. But don’t forget yourself.