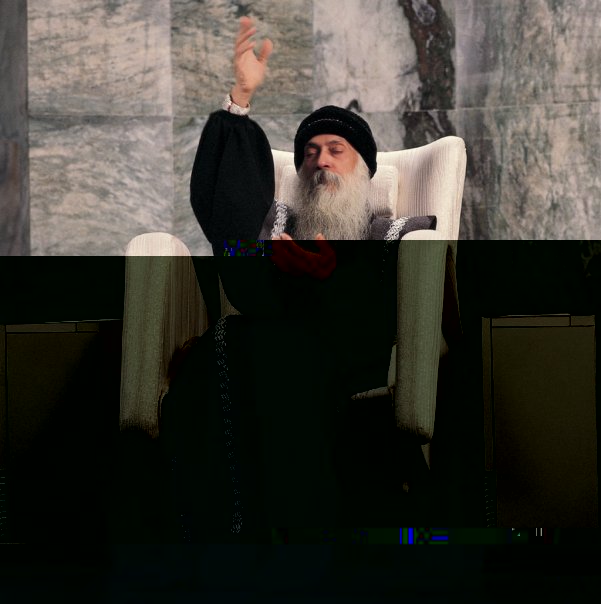 Question – How is it that people who are not enlightened can talk with such apparent inside knowledge and so convincingly about the whole business?

A blind man can talk very easily about light, there is no problem. He has no experience to put into words. Words are empty, so he can go on throwing them out. Of course, he can talk only to another blind man — no man with eyes will be deceived. People who are not enlightened can go on talking to people who are not enlightened… the blind can lead the blind. And, of course, they can argue as well.

Truth is not arguable, truth is not provable. There is no way to prove it, there is no way to logically propose it — it is at the most a seduction. You can seduce a person towards truth but you cannot convince him. Truth is very paradoxical, absurd. A man who does not know what truth is, is more logical, because that which disturbs all logic has not happened yet.

You can talk more easily about love if you have not loved. If you have loved then you will find a difficulty at each step. How to express it? How to say the unsayable? The experience is ineffable; it is so vast it cannot be contained in small words. No container can contain it.

The man who knows, hesitates. Lao Tzu says, ‘Everybody seems to be very certain except me.’ He says, ‘I hesitate as a man who, coming to an ice-bound river, stands on the bank, thinks twice — and then walks very, very carefully. Everybody is walking so confidently.’ Blindness is very confident because it cannot see anything; you can walk into a wall with tremendous confidence. Because he sees things, a man who has eyes cannot walk with as much confidence as a blind man.

All great mystics are unconvincing. By the very nature of things they have to be. You can find a thousand and one flaws in their statements — and they themselves know that the flaws are there. For them it was just a necessary evil to speak. They had to speak. They would have avoided it if it had been possible.

When Buddha became enlightened he remained silent for seven days… this is a beautiful story from the Buddhist scriptures. The gods in heaven became very much worried. It happens rarely that a man becomes a Buddha and even more rarely that a man becomes not only a Buddha but capable of being a Master also — this is even more rare. Many people become Buddhas but only a few of them become Masters. The others remain silent. When they have attained, they fall into deep silence.

The gods were right. They came down to the earth and they went to see Buddha who was sitting under his Bodhi tree. They argued with him and they tried to persuade him that he had to speak. They challenged his compassion. Aud Buddha said, ‘I have been thinking about it myself but it seems futile. Firstly, if I speak, nobody will understand. Secondly, whatsoever I speak will not be the truth, will not be the hundred per cent truth. It will be untrue in many ways — because that which I have known cannot be reduced to a linguistic form. It is formless. I have got the taste of it but to assert it seems impossible.

Then the gods thought about it, brooded over it, and they said, ‘But there are a few who will understand. There are always a few, very few, but they will understand. Yes, if you speak to ten thousand people maybe only one will understand — but even for that one you have to speak.’

And Buddha said, ‘That one will become enlightened even without my speaking. One who is alert enough to understand me will be able sooner or later to reach by himself, so why bother?’

The gods were at a loss. Now what to say to this man? They brooded again. Throughout the whole night they thought and meditated and in the morning they came again and said, ‘You are right, but still you have to speak because there are a few who are just on the verge. If you don’t speak they will not understand, they will not move. If you speak, they will move. You are right, there are a few who will move on their own — but just think of this: if out of one million people even one is standing at the boundary and will not take courage to move without you? why not speak for him? If even one man becomes enlightened out of your whole life’s effort, it is worth it.’

And Buddha had to concede to the gods. He spoke.
He was so reluctant, he was so resistant.

Yes, it is difficult to speak when you know, and it is very easy to speak when you don’t know what you are speaking about. Then the brain goes on functioning like a mechanism, like a robot. It is a tape. To relay information is easy; to relay wisdom is very arduous. That’s why the people who are not enlightened can go on talking with so much apparent inside knowledge.

Inside knowledge is again fabrication — all knowledge is fabrication. Man has beensatisfying himself with knowledge. There is a hunger, a deep thirst, a great search to know God, to know truth, but it seems to be so difficult to reach it that we satisfy ourselves with knowledge. If somebody gives us knowledge we hold it, we cherish it, we keep it inside. Down the centuries that knowledge has by and by become very intricate, very complex, very esoteric. Enlightenment is very simple, childlike; knowledge is very complex. It has to be. It is a cunning invention of man.

When you listen to an enlightened person he is stating simple truths, he is stating very simple truths; he is not talking about great philosophies. He is very factual. In fact, he is not talking about anything; he is simply indicating it. Says Buddha, ‘Buddhas only show the path, they don’t talk about the goal.’ You have to walk — and walking, one day it happens to you. Only on the day that it happens to you will you be able to know that all knowledge is a fabrication out of cunning and clever minds and all understanding is very simple, childlike, very primitive.