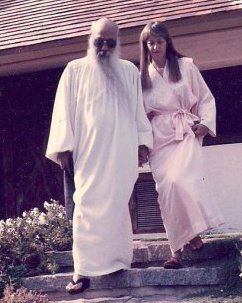 Question: The last few years i have often thought of taking sannyas, but i am afraid. Why?
Osho : It is not only your question; there are millions of people who are in the same position. The fear is very fundamental. To be initiated into sannyas means dropping so many things you have loved, liked, and become identified with. For example, a Mohammedan, a Hindu, a Christian — the first fear is what will happen to their Christianity, to their Hinduism?

My sannyas simply means that you drop all the conditionings that have been imposed upon you after you were born — because nobody is born a Hindu, a Christian, a Buddhist. Every child is just a human being, but there are vested interests all around who impinge on the child, trespass his privacy, start conditioning him, continually emphasize systems of belief. By the time he is able to think, those systems of belief have gone so deep that they have almost become his blood, his bones, his marrow. Now he cannot think about Christianity as an objective thing; he thinks as a Christian, as a Hindu, and that is not thinking. To think as a Christian means you have already accepted a certain prejudice. Your mind is not unprejudiced, not open, not available to the new facts that may arise in the inquiry.

Sannyas makes people afraid. Psychologically it will take away all their toys that they think are very valuable but which are simply rubbish. Unless a truth is known by you, experienced by you, unless you are an eye-witness, it is not a truth. It is only a toy, and it is better to destroy it because it is hindering the way to truth.

So this psychological fear is there, and then there are social fears. You live in society, you work in society, and the people, the crowd, never want anybody to be different from them. The different person means a stranger; he does not belong to them. They will not accept him, they will try in every way to crush him, destroy him.

So when you become a sannyasin in society you are taking a risk, you are declaring, “I am an individual, I am not only a cog in the wheel. I am not just part of the crowd; I am myself.” This creates the fear that you are alone in a vast crowd of people, and one starts wondering how so many people can be wrong.

One Catholic leaves the Catholic fold. There are six hundred million Catholics in the world. How can six hundred million Catholics be wrong? And am I right against such a vast majority? We have been told, particularly by people with a very wrong idea of democracy, that wherever the majority is, truth is. The minority, just by being the minority, loses its truth. But in the real existential world truth is always individual, it has nothing to do with majority or minority. Those who have found, have found alone, not as a crowd, not as a company, not as a church.

So there are fears and there is that constant urge to seek and to search. And I hope that the fears will not be the winners, because anybody who lives out of fears, lives not; he is already dead. Fear is part of death, not of life. Risk, adventure, going into the unknown, is what life means.

So try to understand your fears. And remember one thing: don’t support them, they are your enemies. Support the urge that is still alive in you, make it aflame so that it can burn all those fears and you can move into seeking.

Millions of people have found the truth, but truth is something which remains individual and cannot be given as a thing to somebody else; you have to find it on your own. I think it is one of the most significant gifts of existence that it has not made truth a commodity. Otherwise, there would have been shops in the market where you could purchase truth. You cannot purchase truth at any price. You will have to seek it.

And the sooner the fears are dropped the better, because as you go on growing you are growing closer to death. The fears will become more powerful every day and your life energy will become less strong every day. So the sooner you decide and get out of the imprisonment of fears, the better.