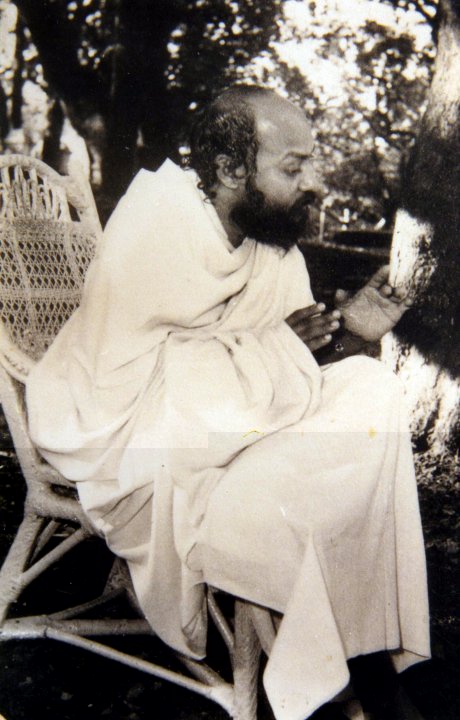 Zen Sutra – “the master said, while i was in zazen a number of wolves gathered around me, licking the tip of my nose, and sniffing my windpipe, but because i remained in the right state of mind, i wasn’t bitten.'”

Osho on above sutra – A very fundamental law of life is that if you become afraid, you give energy to the other to make you more afraid. The very idea of fear in you creates the opposite idea in the other.

Each thought has a negative and positive polarity just like electricity. If you have the negative pole, on the other side a positive pole is created. It is automatic. If you are afraid, the other immediately feels a desire arising in him to oppress you, to torture you.

If you are not afraid, the desire in the other simply disappears And it is not only so with man, it is so even with wolves. With animals it is also the same. If you can remain in the right state — that is, undistracted, silent, just a witness to everything, to whatsoever is happening, with no idea arising in you — then no idea will arise in others around you.

There is an old Indian story. In the Hindu heaven, there is a tree called ‘Kalptaru.’ It means the wish-fulfilling tree. By accident a traveler arrived there and he was so tired that he sat under the tree. And he was hungry so he thought, ‘If somebody was here, I would ask for food. But there seems to be nobody.’

The moment the idea of food appeared in his mind, food suddenly appeared and he was so hungry that he didn’t bother to think about it. He ate it. Then he started feeling sleepy, and he thought, ‘If there was a bed here….’ And the bed appeared.

But lying on the bed the thought arose in him, ‘What is happening? I don’t see anybody here. Food has come, a bed has come — maybe there are ghosts doing things to me!’ Suddenly ghosts appeared.. Then he became afraid and he thought, ‘Now they will kill me!’ And they killed him!

In life the law is the same: if you think of ghosts, they are bound to appear. Think and you will see. If you think of enemies, you will create them; if you think of friends, they will appear. If you love, love appears all around you; if you hate, hate appears. Whatsoever you go on thinking is being fulfilled by a certain law. If you don’t think anything, then nothing happens to you.

The Master simply sat there in the graveyard. The wolves came, but finding nobody there they sniffed. They must have sniffed to see whether this man was thinking or not. They circled around. They watched. But there was nobody, just emptiness. What to do with emptiness?

This emptiness, this silence, this bliss, cannot be destroyed. Not even wolves are that bad. They felt the sacredness of this emptiness and they disappeared. The villagers thought that this man had done some secret rites, but the Master said, ‘I have not done anything, nor could I have done so. I simply sat there and everything changed.’

This anecdote is a parable. If you sit in this world, silently, if you live silently, as an alive nothingness, the world will become a paradise. The wolves will disappear. There is no need to do anything else. Just the right state of your consciousness and everything is done.

So let me say it in this way: if you want to do, you will live in the ego, and the wolves will surround you, and you will be constantly in trouble. If you drop the ego, if you drop the idea of being a doer, if you simply relax into life and are in a let-go, you are again back in the world of God, back in the Garden of Eden — Adam has come back home. Then things happen.

The Christian story says that there was no need for Adam to do anything in the Garden of Eden. Everything was available. But then he fell from grace and he was thrown out. He became knowledgeable, he became an egoist, and since then humanity has been suffering.

Each person has to come back to the Garden of Eden again. The doors are not closed. ‘Knock, and they shall be opened unto you. Ask, and it shall be given.’ But one has to turn back. The path is from doing towards happening, from the ego towards no-ego, from mind towards no-mind. No-mind is what meditation is all about. That different world is nirvana. That different world is God.