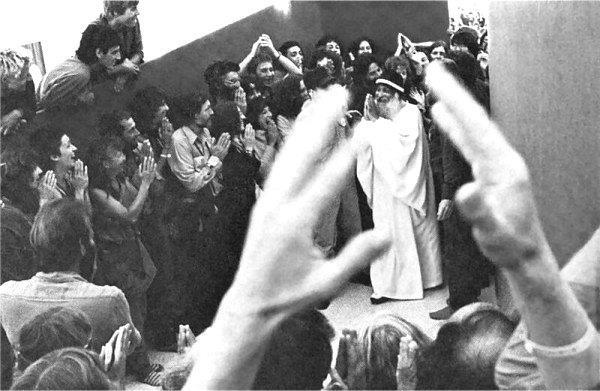 Question : You refer to God always as ‘him’ or ‘he’. What are some of the female qualities of god?
Osho : NOW IT IS a very delicate problem…. In fact, all His qualities are feminine — that’s why I call Him ‘He’ and ‘Him’. Otherwise He has no reason to call Himself a male. You can feel sorry for Him! And you can allow this much, can’t you? He has all the qualities of a woman, but to call Him ‘She’ will be too much. Just to compensate I call Him ‘He’ and ‘Him’.

God is more a mother than a father. God is more like a womb than anything else. Out of God we are born, and back into God we dissolve. He is our birth and He is our death. He is like the ocean: He ‘waves’ us, we become His waves; He absorbs us — we disappear. He is compassion, love. All His qualities are feminine.

But I understand the question. It must be coming from some woman belonging to the Lib movement. They have already started calling Him ‘She’. Nothing wrong in it! In fact, it may become by and by more prevalent. The word ‘she’ is beautiful; in a way, it includes ‘he’ — -s-h-e. ‘He’ does not include ‘she’, right; but ‘she’ includes ‘he’. It is a better word, but very confusing.

The whole humanity, in all the ages, has called Him ‘He’. Maybe something of the male mind is involved in it, because it is man who has created all the scriptures. It would have been very offensive for men to think that He is a she, God is a woman. It would not have been good for the male ego. Now, there is no need to move to the other extreme. What I am pointing at again and again is that extremes are not good.

Up to now we have called Him ‘He’ — maybe male chauvinistic attitudes are implied in it. Now we can start calling Him ‘She’ — then female chauvinistic attitudes will become implied in it. In India, we have a neutral gender: neither masculine nor feminine — neutral. ‘Brahma’, the word for God in India, is a neuter gender word. We call Him ‘It’ — that seems to be the best and the most scientific. We call Him ‘That’ — neither He nor She. Tatwamasi Swetketu — That art thou, that art thou, Swetketu. This is more scientific.

From He it is very easy for the pendulum to swing to She, but it will be again the same fallacy. God is both or neither.