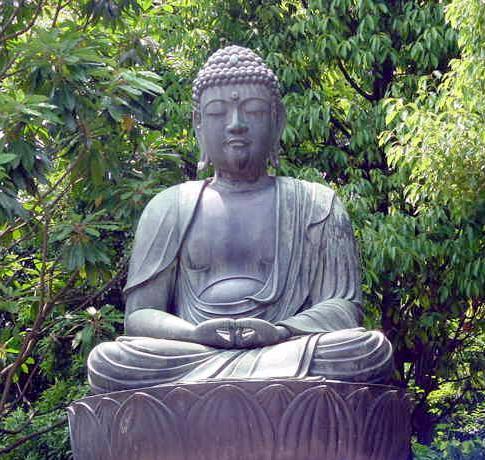 Buddhist Sutra- UNMINDING MIND, KEEP IN THE MIDDLE – UNTIL.

Osho : Only this much is the sutra. Just like any scientific sutra it is short, but even these few words can transform your life totally.

Buddha developed his whole technique of meditation on this sutra. His path is known as MAJJHIM NIKAYA – the middle path. Buddha says, ”Remain always in the middle – in everything.”

One Prince Shrown took initiation, Buddha initiated him into sannyas. That prince was a rare man, and when he took sannyas, when he was initiated, his whole kingdom was just amazed. The kingdom couldn’t believe it, the people couldn’t believe that Prince Shrown could become a sannyasin. No one had ever even imagined it, as he was a man of this world – indulging in everything, indulging to the extreme. Wine and women were his whole milieu.

Then suddenly Buddha came to the town, and the prince went to see him for a DARSHAN – A spiritual encounter. He fell at Buddha’s feet and he said, ”Initiate me. I will leave this world.” Those who had come with him were not even aware… this was so sudden. So they asked Buddha, ”What is happening? This is a miracle. Shrown is not that type of man, and he has lived very luxuriously.

Up to now we couldn’t even imagine that Shrown is going to take sannyas, so what has happened? You have done something.”

So a person who was after wealth, mad after wealth, will become mad against it, but the madness will remain – that is the mind. A man who lived just for sex may become a celibate, may move into isolation, but the madness will remain. Before he was living only for sex, now he will be living only against sex – but the attitude, the approach, remains the same.

So a BRAHMACHARI, a celibate, is not really beyond sex; his whole mind is sex-oriented. He is against, but not beyond. The way of beyond is always in the middle, it is never at the extreme. So Buddha says, ”This could have been expected. No miracle has happened. This is how mind works.”

Shrown became a beggar, a sannyasin. He became a BHIKKHU, a monk, and soon other disciples of Buddha observed that he was moving to the other extreme. Buddha never asked anyone to be naked, but Shrown became naked. Buddha was not for nakedness. He said, ”That is just another extreme.”

There are persons who live for clothes as if that is their life, and there are other persons who become naked – but both believe in the same thing. Buddha never taught nakedness, but Shrown became naked. He was the only disciple of Buddha who was naked. He became very, very self-torturing.

Buddha allowed one meal every day for the sannyasins, but Shrown would take only one meal on alternate days. He became lean and thin. While all the other disciples would sit for meditation under trees, in the shade, he would never sit under any tree. He would always remain in the hot sun. He was a beautiful man and he had a very lovely body, but within six months no one could recognize that he was the same man. He became ugly, dark, black, burned.

Buddha went to Shrown one night and asked him, ”Shrown, I have heard that when you were a prince, before initiation, you used to play on a VEENA, a sitar, and you were a great musician. So I have come to ask you one question. If the strings of the veena are very loose, what happens?”

Shrown said, ”It is easy to play the veena, but only a master can set these strings right, in the middle.”
So Buddha said, ”This much I have to say to you, after observing you for the last six months – that in life also the music comes only when the strings are neither loose nor tight, but just in the middle.

But the mind is very unmindful. That is why the sutra says, UNMINDING MIND… You will hear this, you will understand this, but the mind will not take note. The mind will always go on choosing extremes.

Mind is just like a pendulum and every day, if you observe, you will come to know this. You decide one thing on one extreme, and then you move to another. You are angry; then you repent.