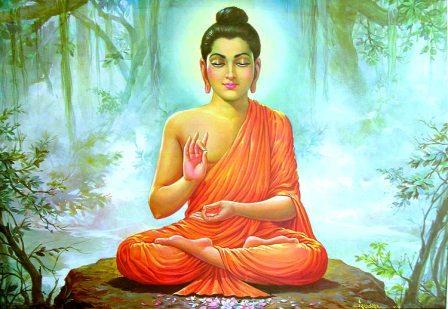 Osho : Deva means divine, Madhyama means the middle – the divine middle. The extreme is the disease, and the mind lives through the extremes. The mind always thinks in terms of either/or, and reality is just exactly in the middle. It is never either/or; it is both/and. It is neither day nor night, neither life nor death, neither body nor soul. It is somewhere between the two, exactly between the two.

And the mind is always a chooser, it lives through choosing. The moment you stop choosing and allow life to be as it is, you immediately fall into the middle. Let-go is the way of the middle. Choicelessness is the meaning of let-go; Then you allow life, whatsoever it brings.

Buddha calls it the philosophy of suchness, ’tathata’, the philosophy of as-it-is-ness. Let it be as it is: when it is night, it is night; don’t hanker for the day. When it is day, it is day; don’t ask for the night. When it is pain it is pain; when it is pleasure it is pleasure. Don’t choose, allow it to happen. Slowly, slowly a great understanding arises out of this allowing, out of this let-go. And that understanding makes you alert, aware that you are separate from both.

Slowly, slowly, the knack arises. Once you have understood how to be in the middle the mind disappears on its own accord, because it cannot exist in the middle; that is the secret of the work. It can exist only in the extreme, opposite to something, diametrically opposed to something. It is a chooser: it can either love or hate.

It cannot rest in the middle without choosing, without prejudice. It cannot allow things to have their own way. It interferes, it tries to impose itself upon reality. Reality is, God is, and all is already as it should be. We have just to relax and allow it to be.

One thought on “Osho on Gautam Buddha Suchness, Tathata, Choicelessness”