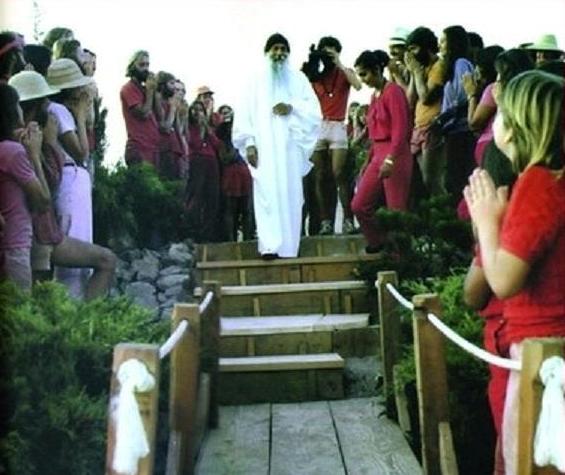 Question : Beloved Master, Whatever i do, i try too hard. Please tell us about Buddha’s “right effort.”
Osho : Anand Nagaro, Gautama the Buddha has taught only one thing, and that is the middle way. Never go to the extreme. All extremes are the same. Be exactly in the middle and you will be freed, you will be liberated.

There are Jaina monks; in Buddha’s time they were very influential. Buddha’s whole fight was with Jaina monks, because they were extremists. They remain naked because if you wear clothes you may become attached to the clothes. They will not carry anything with them, not even a razor; when their hair is too long, they will pull it out. They will not wear shoes, they will walk barefoot, because shoes are a luxury. Naked, without any possessions, they impress people very much.

Extremists are always very impressive. You are greedy, you are after money, after power, prestige; they have renounced all. Certainly, a great respect arises in your heart for them because you know you cannot do this; it is too cold to be naked. And to live without money…. The Jaina monk cannot touch money; he is not allowed to touch it, he is not even allowed to SEE money. How can you live without money? A great respect arises in you. You live on one extreme and you respect the other extreme. Sooner or later, when you will become fed up with your extreme, you will start moving to the other extreme. But no basic change happens. The man who is afraid of touching money is still in a state of ignorance, unawareness.

When you are indulging you are gaining momentum for renouncing the world, and when you are renouncing you will gain momentum to indulge again. And this can go on for lives together. But hold the pendulum in the middle and the clock stops.

You ask me, Nagaro, “Whatever I do, I try too hard. Please tell us about Buddha’s ‘right effort’.”
Right effort means don’t try too hard. Right effort also means don’t stop trying completely. It means, just try in a relaxed way, neither too hard nor too soft, just in a relaxed way, in a very playful way. When you are trying too hard you become tense; when you are not trying at all you become lazy. When you are trying playfully you are neither lazy nor tense. Your life has a beauty, a grace, a balance, a harmony. Be in the middle, that’s exactly the meaning of right effort.

Whenever Buddha uses the word ‘right’, remember, he means balance. ‘Right’ is a translation of a word which means balance, because the extreme is wrong, both the extremes are wrong. Buddha’s word is SAMYAK; SAM means balance, equilibrium. He uses that word more than any other word; he uses it for everything. If you are making effort for anything, let it be samyak, balanced, exactly in the middle.

If you are meditating, Buddha says, let it be samyak — right meditation. Don’t make too much fuss about it, don’t make a tension out of it. Don’t create anguish. Don’t become mad. Don’t be aggressive. And he also says that that does not mean to forget all about it and go on living the way you are living. No, make efforts for meditation, but in a joyous way, a graceful way, always in the middle. Be gentle, be gentlemanly. Buddha is the perfect gentleman; the emphasis is on gentle. He is a rare person in that way.

Mahavira seems to be an extremist — another enlightened person who was Buddha’s contemporary, the last prophet of the Jainas. He seems to be very extremist. It is said that for twelve years he was silent, didn’t speak a single word. Now, this is going too far. Don’t speak too much….

I have heard a story about Morarji Desai: Whenever he speaks, his wife will send him a note. Every-body around him became curious, naturally, “What is that note?” Always it comes, inevitably…. And on the note they found there is only one word: Kiss.

They told Morarji Desai, “This is rare in this age of unfaithfulness; your wife still loves you so much. You are eighty-four, she must be seventy-five or more. Still such romance that whenever you stand to speak she sends you a note always welcoming you with a kiss.”

Morarji looked angry — as he always looks, that is nothing new! When he smiles, that is rare. Even in his smile there is no smile; still he looks as if he is angry. The smile seems to be painted. But he was really angry. He said, “You don’t know what she means. It is a short form; it means, ‘Keep it short, stupid.’ That is the meaning of ‘kiss’.”

If you keep it short, that’s okay, but there is no need to become dumb for twelve years. Be telegraphic, use only words which are necessary. Don’t go on chattering twenty-four hours a day, either with others or with yourself. People are chattering constantly, day in, day out. In the day they are chattering, in the night they are chattering.

Mulla Nasruddin’s wife went to the physician and said that “My husband talks in his sleep. Something has to be done. I am very much disturbed about it.”
The physician said, “I can understand. Take this medicine and within a week or two he will stop talking in his sleep.”
The wife said, “You misunderstand me. I don’t want him to stop, I want him to talk clearly so I can hear what he is saying.”

People are talking in their sleep, people are talking while they are awake. People are constantly talking; needed, not needed, they go on talking. Talking seems to be a kind of escape from themselves. So Buddha says it is good for a few hours to be silent, but there is no need to be silent forever.

It is said that Mahavira ate only once in a while. Ten days he would fast — or twenty days or thirty days — and then one day he would take food. In those twelve years he took food only three hundred and sixty-five times; that means only one year. In twelve years, if that is the proportion, it comes to once every twelve days.

Buddha says that is unnecessary, that is torture, that is making an extreme effort for no reason. It is perfectly good if you eat only as much as is needed; people are eating too much, people are stuffing themselves with food. That is again another way of keeping yourself away from yourself, keeping yourself engaged.

People feel so empty — like Prem Barkha — everybody feels empty. And there is some unconscious desire to fill this emptiness — through food, through smoking, through drink, through something; through talk, through the television, through the radio. Just remain occupied so you feel full.

Just the other day I was reading that in America they have now invented a new kind of refrigerator. You open the door and the refrigerator immediately says, “Excuse me, be kind to yourself. Please close the door.” People are constantly moving towards the fridge; that seems to be their only exercise. Even in the night when they have nothing to do or they are not feeling sleepy they will go to the fridge.

There are people, and their number is big… out of ten, one person is capable of sleepwalking. They walk in their sleep and the direction is always towards the fridge. Even in sleep they know where the fridge is! They don’t stumble anywhere, they go directly like an arrow. Now this is one extreme, and not eating for eleven or twelve days then eating only for one day, that is another extreme.

Buddha says “right food.” Be in the middle. Eat as much as is necessary for your health, for your well-being, don’t eat too much. And that goes for everything in your life.

At this point the salesman looked at her and said, “Madam, if you will stand up and bend over I will give you a shoe not too high and not too low — just in between!”

Source – Osho Book “The Dhammapada, The Way of The Buddha, Vol 9”