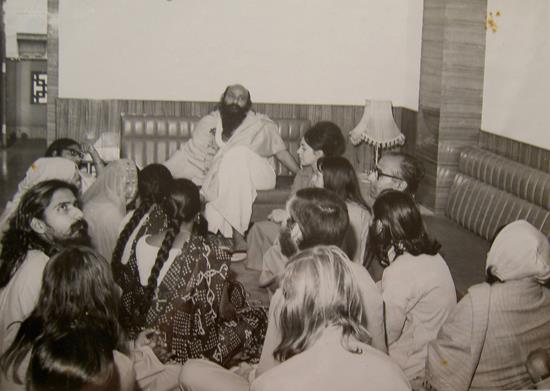 Question: Do you think some of those ghosts might still be kicking around underneath?
Osho : There are no ghosts. There was only one ghost — the holy ghost — and he too finished only by making a poor girl pregnant. Then what happened to the holy ghost? He must have committed suicide, thinking of the consequences that followed his making the woman pregnant, which was illegal, criminal, irreligious, a sin.

Secondly, out of that sin, what else can you expect but Jesus Christ? People had to crucify him. Seeing his son being crucified, do you think the holy ghost would have survived? Since then, nothing has been heard about him. No news… the Vatican is silent.

There are no ghosts, there are only dead skeletons underneath. The soul goes on moving to new forms. It depends how you have lived. Your whole life essence determines your new form. What you have desired your whole life and have not been able to fulfill, that desire at the last moment of your life stands as the only thing that determines your life. There is nobody directing anything, it is simply the law.

For example, a man goes on writing to me — obviously he’s from California. It is so difficult to find anything right in California. The man goes on writing to me that he loves to dress himself in women’s dresses. When he was in California, there was no problem. There are many who are doing that and they are doing it perfectly. It is very difficult to detect that this is a man — with tits and all! But here he finds it difficult, because everybody knows he is a man. So he goes on asking me what he should do: “Should I go through plastic surgery and become a woman?’

Now, this man if he dies will become a woman. That is his whole mind, full of only one desire: to become a woman. And it is my experience that this is not an exceptional case, this is the rule. Men get tired in seventy years’ life of being men, and every man thinks women are more juicy, enjoying life more, and he has been simply sucked of all his energy.

And the woman her whole life goes on thinking that, as a woman, whatsoever she is going to do, she is not going to be really equal to man. Liberation or no liberation, man is going to dominate her. The woman carries the desire to be a man, and my experiments with many people about their past lives even surprised me in the beginning, because the man was a woman in the past life, the woman was a man in the past life. For many lives you have been human beings, man or woman.

But if we go deeper, you have been animals. If you go still deeper, you have been plants — but that is millions of lives back. The whole physiological, biological evolution stopped at man. This whole growth up to now was horizontal. At this point, man has come to a crossroad. He can go on horizontally, changing man to woman, woman to man, but there is no growth. Now he has to take a vertical route, not horizontal. And that vertical route is my whole effort.

Meditation is a way of giving you a vertical route. Then there is no need to be reborn. Bodies move horizontally, souls have wings. Once you are fully alert, aware, conscious, enlightened, then this is your last body, because only bodies can move on the horizontal line. Now you are a soul. You will have to move vertically.

But what a joy! Not to have a cage of bones, muscles, blood vessels, nerve system, a skull…. Sometimes it is good experience to go to a medical college and see a skeleton: this is you, really naked. Not only the clothes are removed… he has gone too far; he has removed everything. Just bones, just the fundamental structure is there, and everything else has been removed.

Once in a while, standing before a mirror, just close your eyes and think that you are a skeleton. Then open your eyes and look into the mirror. Try to figure out what kind of skeleton you have. That’s why I say you should first see a few skeletons.

I suggest to Vedant and Siddha that in the university you should have a few skeletons hanging around all over the place, so nobody can bypass — and that will prove also that this is not a marketplace, and everybody has to understand that this is your reality. When the soul is free from all bondage, it moves into the cosmos, it becomes one with the sky, with the sunrise, with the flowers, with the birds, with all that exists. It spreads all over. It has no more any limitations, it is as big and vast as the whole universe itself. That’s what I call liberation. That is the end, because nothing is more blissful, more ecstatic, than to achieve it.

Related Post: Osho – People go on being born in the same race