Osho – Guilt creates pathology. Drop your guilt. And don’t bother about the causes 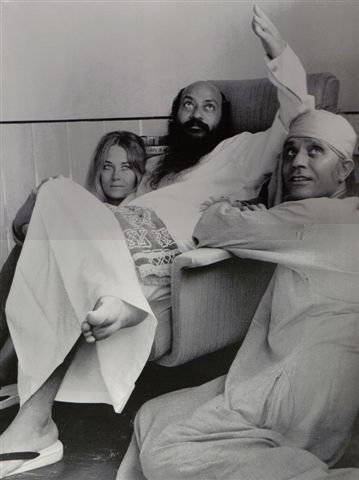 QUESTION – I ALWAYS FEEL GUILTY EVEN THOUGH THERE IS NO APPARENT CAUSE. WHY?

They have created tremendous guilt in everybody — and they have created so much guilt that now you don’t need any particular cause to be guilty, you are simply guilty. Everything has been condemned, nothing has been appreciated. And particularly when you are joyful, cheerful, happy, you will feel more guilty. Miserable you may not feel so guilty but happy you will always feel guilty.

And this happens to many people here because my whole approach is to declare happiness as virtue and misery as sin. My whole point is that a religious person is a celebrating person. But when you start celebrating, your past holds you back. It cries loudly, it shouts at you, it scolds you, it insults you, it calls you names — ‘What are you doing? Don’t be happy. Remain miserable.’

Somehow the idea got into human mind that saints are always miserable and sinners are happy. That’s why you don’t find saints laughing. Christians say Jesus never laughed. It must be wrong because I know Jesus. But the Christians say he never laughed. You cannot believe in Mahavir laughing — even a smile will be too much. You cannot conceive of your saints laughing, they are expected to be very, very sober, serious, dull and dead.

One Sunday after Mr. Coolidge had returned to the White House from church, which he had attended without her, Mrs. Coolidge enquire — Coolidge was one of the very, very silent presidents of America, a man of few words.
— Mrs. Coolidge enquired, ‘Was the sermon Good?’
‘Yes,’ he answered.
‘What was it about?’
‘Sin.’
‘What did the minister say?’
‘He was against it.’

That is all he said. That’s all that your so-called priests and the ministers and the bishops and the popes have been doing. Their whole preaching is one: joy somehow has to be condemned. They have made this miserable earth, this anguished, mad earth. They have destroyed all kinds of possibilities in man. They have created a very pathological humanity. Guilt creates pathology. Drop your guilt. And don’t bother about the causes.

But if you really want to drop the guilt you will have to drop your parental voices within, the priestly voices within. You will have to get rid of your parents and your conditioning. Life has been in such a trap up to now that even a small child starts feeling guilty. We have not yet been able to develop an education which can help people to grow without feeling guilty. And unless that education happens man will remain ill, ill at ease.

Sometimes guilt is created for unnecessary reasons. Sometimes there is no point. The child is asking the mother, ‘Can I go out and play?’ It is sunny and the flowers and the birds are singing and the child asks, ‘Can I go outside and play?’ and the mother says no. Mothers are so efficient at saying no. Yes seems so hard, yes seems to be so difficult to say.

Have you not watched it yourself? Yes is so difficult to say. I have been watching. I have lived in many families with many people and I have been watching continuously. People are so skillful in saying no, they will find ways of saying no. And if they have to say yes they say it very reluctantly, very uncomfortably. Why? When you say no you will feel powerful — that’s the ‘why’ in it. Say no and you will feel powerful, you have the power, the way to power.

It may be a small child who just wanted to go outside to catch some flying butterfly or to collect a few flowers or just to be there outside with the air and with the rain and with the sun. He’s not asking for much. But the mother says no because only by saying no does she feel powerful. She is on a power trip.

By and by this guilt will settle. Whenever he asked to go out he was told no and whenever he went out it was a crime against the mother. Now the guilt settles. Now suddenly, when you are forty years old, one day sitting outside on the lawn you feel guilty for no reason at all — for no apparent reason. The sun is there and the butterflies are around and the green grass has been freshly cut and the smell of it — and again those smells those sounds that greenery the sun, the warmth remind you of your childhood. Many many guilt feelings arise for no reason at all — you are not doing wrong to anybody. If you get up and go inside your house you will feel good. Drop these things otherwise you will never enjoy anything. You are no more a child.

Mulla’s friends looked at junior and remarked I hope he it satisfied. The other friend said Yes depriving us of a partner just before our last crucial poker game and all because junior has to ride around in his old stroller. I just hope he is satisfied. Mulla junior looked sadly at the sky and to ought My first year in this world and I am already feeling guilty.

That’s how guilt arises. Small incidents go on collecting, go on collecting — then guilt becomes your natural style. People are simply guilty. Don’t ask why. Your whole past is the why. And you will have to drop the whole past otherwise you will never be able to get rid of guilt. And unless you get rid of guilt you cannot find God. A guilty heart cannot pulsate with God.

That’s exactly what has been denied by your priests. They always say that a guilty person, a repentant person, a person who confesses his sin and this and that comics closer to God. No a person who drops all guilty ideas and starts enjoying life as it is, has no guilty conscience in him, comes close to God. Don’t confess. Drop the very idea of guilt and start living.

There was a spinster who had a parrot, and it swore and used some terrible expressions. When the Vicar called she covered it up for shame, and the Vicar enquire the reason. ‘I couldn’t repeat it,’ she said, but the Vicar pulled the cover off, and that wicked bird let out a mouthful.
‘I’ll have to have his neck pulled, the villain!’ said the spinster.

‘Certainly not, Miss Tavvinitt,’ he said, ‘I have a lady parrot, a parrot of the utmost virtue, who prays by day and night. I’m sure that if we put them together she will reform him.’

This was agreed upon, and the following day Miss Tavvinitt took her bird round to the Vicarage, and he was put in the cage with the devout lady parrot.
Immediately he misbehaved, shouting, ‘Lift your tail up, come on, I want to make love to you, what are we waiting for!’

Before the Vicar and the spinster could do a thing about it, the lady parrot replied, ‘What the bloody hell d’you think I’ve been praying for all these years?’

Don’t go on praying — live life. Live it as God gives it to you, live it without guilt, live it courageously.