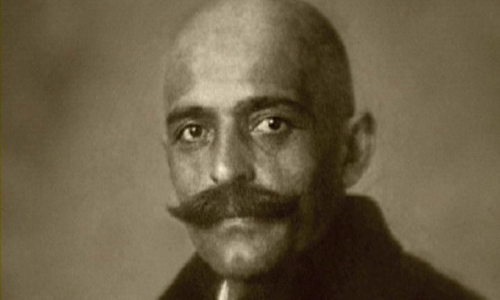 Osho : I was worried that I may not be able to mention Gurdjieff’s book MEETINGS WITH REMARKABLE MEN. Thank God for this P.P.S. This is a great work. Gurdjieff traveled all over the world, particularly in the Middle East and India. He went up to Tibet; not only that, he was the teacher of the late Dalai Lama… not the present one – he is a fool – but the previous one.

Gurdjieff’s name in Tibetan is written as Dorjeb, and many people thought that Dorjeb was someone else. He is none other than George Gurdjieff. Because this fact was known to the British government – that Gurdjieff had been in Tibet for many years; not only there, but had been living in the palace at Lhasa for many years – they prevented him from staying in England. He originally wanted to stay in England but was not allowed.

Gurdjieff wrote this book MEETINGS WITH REMARKABLE MEN as a memoir. It is a tremendously respectful memory to all those strange people he had met in his life – Sufis, Indian mystics, Tibetan lamas, Japanese Zen monks. I must mention to you that he did not write of them all; he left many out of the account for the simple reason that the book was going to be in the marketplace and it had to fulfill the demands of the market.

I don’t have to fulfill anybody’s demands. I am not a man who worries at all about the market, hence I can say that he left out the really most remarkably significant people from his account. But whatsoever he wrote is still beautiful. It still brings tears to my eyes. Whenever something is beautiful my eyes fill with tears; there is no other way to pay homage.

This is a book that should be studied, not just read. In English you don’t have a word for path; it is a Hindi word which means reading and reading the same thing every day for your whole life. It cannot be translated as reading, particularly in the West where you read a paperback and once you have read it you throw it away or leave it on the train.

It cannot be translated as study either, because study is a concentrated effort to understand the meaning of the word, or words. ’Path’ is neither reading nor study, but something more. It is repeating joyously, so joyously that it penetrates to your very heart, so it becomes your breathing. It takes a lifetime, and that’s what is needed if you want to understand real books, books like Gurdjieff’s MEETINGS WITH REMARKABLE MEN.

It is not a fiction like DON JUAN – a fictitious man created by an American fellow, Carlos Castaneda. This man has done a great disservice to humanity. One should not write spiritual fictions for the simple reason that people start thinking that spirituality is nothing but a fiction.

MEETINGS WITH REMARKABLE MEN is a real book. A few of the people Gurdjieff mentions are still alive; I have met a few of them myself. I am a witness to the fact those people are not fictitious, although I cannot forgive even Gurdjieff for leaving out the most remarkable people he met. There is no need to compromise with the marketplace; there is no need to compromise at all. He was such a strong man, I wonder why he compromised, why he omitted the really important people. I have met a few people that he omitted from the book, who themselves told me that Gurdjieff had been there. They are very old now. But still the book is good – half, incomplete, but valuable.

One thought on “Osho on Gurdjieff Book "Meetings with remarkable men"”