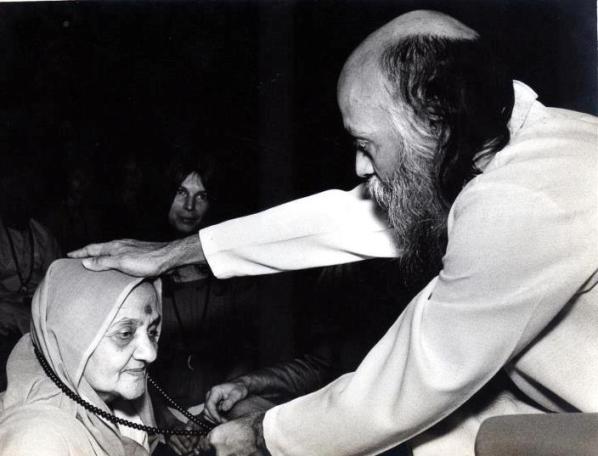 (Osho giving Sannyas to His Mother)

Question – Bhagwan, are you no guru at all or are you the rich man’s guru?
Osho – From my side, I am no guru at all. The word guru has become almost condemnatory. The root meaning of the word is beautiful. The word originally means one who is more consolidated, crystallized, one who has more weight.

In Hindi, gravitation is called guruthwa karshan. Just as the earth gravitates, the guru gravitates people towards himself — without doing anything. The earth is not doing anything while gravitating you; it is just the nature of the earth that anything that is within its area of two hundred miles will start being pulled towards it.

Guru means one who is weight-full, centered, rooted, and has the quality of gravitation. But that original meaning has been lost, and particularly since Indian gurus started appearing in the West, it has become almost a dirty word.

And it has to become so because the people who came to the West were not gurus at all. They came to the West to exploit people. They knew — at least they were knowledgeable — about many things of which the West was unaware. They were more philosophical, more theological, more argumentative. That has been a professional thing in India for centuries. So when they came to the West they immediately had a great impact. The Christian minister looked very poor. Even the best scholarly rabbi was no competition.

And these were not very great men, those who had come. They had come here to have a following, to collect money, and finally, to take that money to India to make temples in India and places for them and their disciples to live. But it was all a materialistic thing; there was nothing of the spirit at all.

Naturally, the word guru became a condemned word. That’s why I say I am no guru at all, in the sense the word is used today. But in the original sense, I cannot deny it. You are the proof, enough proof, so how I can deny it? People have fallen in love with me, have completely devoted their lives to me. I have never asked. It was their feeling.

There was something of tremendous gravitation, and people from faraway countries started coming to me. I would never have left India if I had not felt that if people from all over the world had to go there, and suffer unnecessary sicknesses….

It was not only my disease, that was just an excuse — because I never wanted to say that I have moved from there because of you, so I simply said I am moving from India because of my own body, its sickness. But in a way, it implied you too, because you are my body and your sickness is my sickness and your health will be my health.

But this was the basic reason I wanted to get out of India: because so many thousands of people were coming; at least I should give them a place where they have pure water, pure air, open air, and no unnecessary harassment. In India it was impossible.

This commune and all the sannyasins around the world know perfectly well that they have a certain strong heart-to-heart connection with me. You can give it any name, but I would like to call it simply a friendship — a friendship because you are my fellow travelers.

So I have avoided the word guru because of its derogatory connotations. I have avoided the term religious leader because the word leader means, “I know and you do not know, so you follow me, you believe in me.” That I cannot say to anybody; that is simply humiliating the person.

Whatever I know, I put it before you. If you feel like choosing, you choose. Wherever I am going, I make it clear to you. I don’t say, “Come and follow me.” That is up to you. That is your freedom. I am in a strange position: what word to use? Guru has become an ugly word. Its translation in English as master has also lost its meaning….

But this is my side, that I am only a friendly guide. From your side, you are free to think what you want, because I cannot decide that.