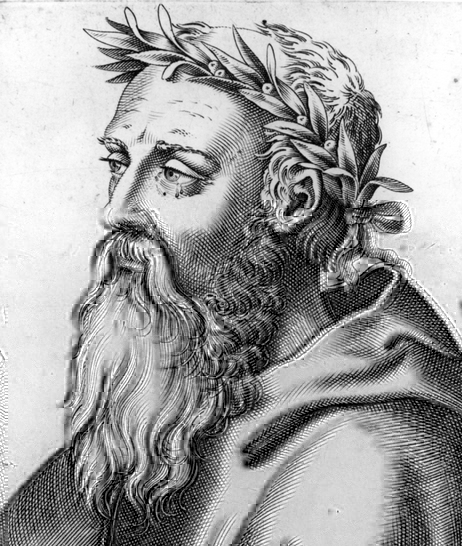 Aristotle said, “At the most he is a poet,” but that too was difficult for him to concede. So later on he said in other works, “There must be some defect in Heraclitus’ character, something wrong biologically; that’s why he talks in such obscure ways, and talks in paradoxes.” Aristotle thought that he was a little eccentric, a little mad — and Aristotle dominates the whole West. If Heraclitus had been accepted, the whole history of the West would have been totally different. But he was not understood at all. He became more and more separate from the main current of Western thinking and the Western mind.

Heraclitus was like Gautam Buddha or Lao Tzu or Basho. The Greek soil was absolutely not good for him. He would have been a great tree in the East: millions would have profited, millions would have found the way through him. But for Greeks he was just outlandish, eccentric, something foreign, alien; he didn’t belong to them. That’s why his name has remained just on the side, in a dark corner; by and by he has been forgotten.

At the moment when Heraclitus was born, precisely at that moment, humanity reached a peak, a moment of transformation. It happens with humanity just as with an individual: there are moments when changes happen. Every seven years the body changes, and it goes on changing — if you live for seventy years, then your total bio-physical system will change ten times. And if you can use those gaps when the body changes, it will be very easy to move in meditation.

For example, at fourteen for the first time sex becomes important. The body goes through a biochemical change, and if at that moment you can be introduced into the dimension of meditation, it will be very, very easy to move because the body is not fixed, the old pattern has gone and the new has yet to come in — there is a gap. At the age of twenty-one, again deep changes happen, because every seven years the body completely renovates itself: all the old cells drop and the new cells come in. At the age of thirty-five again it happens, and this goes on. Every seven years your body comes to a point where the old goes and the new settles — and there is a transitory period. In that transitory period everything is liquid. If you want some new dimension to enter into your life, that is precisely the moment.

In the same way exactly it happens also in the history of humanity as a whole. Every twenty-five centuries there comes a peak — and if you can use that moment, you can easily become enlightened. It will not be so easy in other times because at that peak the river itself is flowing in that direction; everything is fluid, nothing is fixed.

Twenty-five centuries ago there were born in India, Gautam Buddha, Mahavira the Jaina; in China, Lao Tzu, Chuang Tzu; in Iran, Zarathustra; and in Greece, Heraclitus. They are the peaks. Never before were such peaks attained, or if they were attained they are not part of history, because history starts with Jesus.

You don’t know what happened these twenty-five centuries ago. Again the moment is coming, we are again in a fluid state: the old is meaningless, the past doesn’t have any significance for you, the future is uncertain — the gap is here. And again humanity will achieve a peak, the same peak as there was in Heraclitus’ time. And if you are a little aware, you can use this moment — you can simply drop out of the wheel of life. When things are liquid, transformation is easy. When things are fixed, then transformation is difficult.

You are fortunate that you are born in an age when things are again in a state of liquidity. Nothing is certain, all old codes and commandments have become useless. New patterns have not settled in. They will settle soon; man cannot remain forever unsettled, because when you are unsettled there is insecurity. Things will settle again, this moment will not last for ever; it is only for a few years. If you can use it, you can reach a peak which will be very, very difficult to reach in other times. If you miss it, the moment is missed for twenty-five centuries again.

Remember this: life moves in a cycle, everything moves in a cycle. The child is born, then comes the age of youth, then old age, then death. It moves just as seasons move: summer comes, then rains follow, then comes winter, and it goes on in a circle. The same happens in the dimension of consciousness: every twenty-five centuries the circle is complete and before the new circle starts there is a gap you can escape through; the door is open for a few years.

There are two types of people. If you want to understand Aristotle you don’t need any change in your being, you simply need some information. A school can provide some information about logic, philosophy; you can collect some intellectual understanding and you can understand Aristotle. You need not change to understand him, you need only a few more additions to your knowledge. The being remains the same, you remain the same. You need not have a different plane of consciousness; that is not the requirement.

Aristotle is clear. If you want to understand him, a little effort is enough; anybody of average mind and intelligence will understand him. But to understand Heraclitus is going to be rough terrain, difficult, because whatsoever you collect as knowledge will not be of much help; just a very, very cultivated head won’t be of any help. You will need a different quality of being — and that is difficult — you will need a transformation. Hence, he is called obscure. He is NOT obscure! You are below the level of being where he can be understood. When you reach that level of being, suddenly all darkness around him disappears. He is one of the most luminous beings; he is not obscure, he is not dark — it is you who are blind. Remember this always, because if you say he is dark you are throwing the responsibility on him, you are trying to escape from a transformation that is possible through encountering him. Don’t say that he is dark. Say, “We are blind,” or, “Our eyes are closed.”

The sun is there: you can stand in front of the sun with closed eyes and you can say the sun is dark. And sometimes it also happens that you can stand with open eyes before the sun, but the light is so much that your eyes temporarily go blind. The light is too much to bear, it is unbearable; suddenly, darkness. Eyes are open, the sun is there, but the sun is too much for your eyes so you feel darkness. And that is the case — Heraclitus is not dark. Either you are blind, or your eyes are closed, or there is also the third possibility: when you look at Heraclitus, he is such a luminous being that your eyes simply lose the capacity to see. He is unbearable, the light is too much for you. You are not accustomed to such light so you will need to make a few arrangements before you can understand Heraclitus. And when he is talking he looks as if he is riddling, he looks as if he is enjoying riddles, because he talks in paradoxes.

All those who have known always talk in paradoxes. There is something to it — they are not riddling, they are very simple. But what can they do? If life itself is paradoxical, what can they do? Just to avoid paradoxes you can create neat and clean theories, but they will be false, they will not be true to life. Aristotle is very neat, clean; he looks like a man-managed garden. Heraclitus looks like riddles — he is a wild forest.