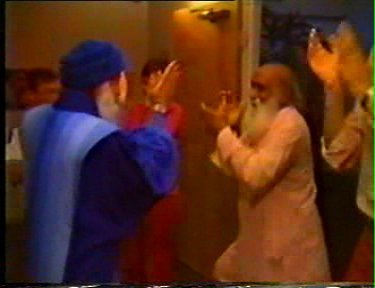 [To two resident sannyasins returning for a brief visit to the States to see their parents, Osho spoke about how one could introduce one’s parents to sannyas, meditation, and Osho, in a way that would be acceptable. He said one should not try to argue, but simply let one’s being, one’s happiness, be evidence of one’s new life. He said to meditate and let their parents watch, without enforcing anything on them. Meditation is the greatest gift one can give to one’s parents… ]

Osho – In fact everybody is in need of meditation. Everybody is starved of it. Particularly as one grows older in life, more and more is the necessity felt. Of course people have completely forgotten the language of it. They cannot even form the right question about what is missing.

That’s what meditation is all about. Because in the West people have completely forgotten – and Christianity has never talked about meditation, but at the most about prayer, which is a very diluted form, which doesn’t work much – when people become older, when they come to the middle of their life, suddenly they feel a haunting, that something is missing; what is it? They cannot even pinpoint it. They cannot put their finger on it: ’This is what is missing.’

There is only one language, and that is of sex. Or they start thinking that they need more money, a bigger house, bigger cars, because that is the whole logic they have been living by and they cannot find any satisfaction through it. They go on and on and on until they simply fall down dead and die.

But meditation is as natural an urge as sex. It has its own time. So when you go back home, go with this mission. Then you are taking something from me for them. And if they criticise, listen to it very attentively. Don’t try to reply, rather let your whole being respond. If they say what nonsense you have done by taking sannyas – which is a natural thing to say – laugh about it. Don’t take it negatively. Enjoy the idea and tell them it is nonsense.

Unless the rainbow has happened inside, just changing the colour of the clothes is absolutely absurd. So remember it. In the beginning it is difficult; one tends to fall into the old pattern and one starts talking to the mother, to the father, in the old way. One starts making old gestures; old body language again erupts. You have got your body from them, you have learned all your body gestures from them. Their very presence is provocative. You have lived in your mother’s womb. You are part of their being – extensions.

When you are close to a parent, suddenly you start vibrating in his tune, and of course he is more powerful and he is going to remain more powerful. He is more experienced, more settled, more authoritative. You immediately start following his rhythm. That is very unconscious. You start vibrating in his rhythm. That’s why children feel very awkward and embarrassed. The more something new happens to a child, the more he finds it difficult to approach the parent, because on becoming closer, he starts vibrating in some past rhythm. His own rhythm is lost.

So for seven days you have to remember it and then you will not be in any difficulty after that. In fact they will start feeling that a new rhythm has arisen in you. They will start feeling the attraction of you, the grace, the beauty, the grandeur. Then you are more powerful. Then they can fall into your rhythm and can have a new taste of life.