Osho on how to share your Meditation with Dying Person 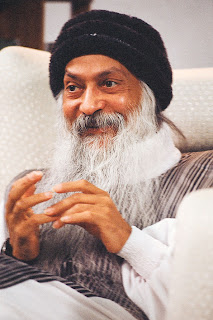 [A sannyasin said her father has cancer and her family keep asking her to go home, but she is
undecided as she also wants to stay here. Osho says that as the father is old, it is better she go…. ]

Osho – And this is a significant time. Go, and be as loving to him as possible. Be very meditative while you are around him. Just sit silently by his side and become completely silent, hold his hand. If you become silent, he will start falling into silence, and he needs that. If he can die joyously that will be a great gift to him.

Everybody has to die – cancer or no cancer, that is not very important. The most important thing is that one should die celebrating. And if he can celebrate, if he can be silent and happy, maybe he can live a little longer too. This is the paradox: if you are too much afraid of death, death comes sooner; if you accept it, it may not come so soon.

Sometimes it happens that the day a person accepts death, death becomes afraid, because with the very accepting you become very strong – fear is our weakness! Now he must be scared… and in the West particularly, people are so much afraid of death. In the east things are a little different – at least, they used to be different: people accept death, it is part of the game.

But in the west death seems to be anti-life, it is not part of the game. It seems to be inimical, it is not the friend. So if you can bring this understanding to him it will be a great gift. And now you can share with him – you can share me with him! Go, take a few tapes, let him feel, tell him to meditate – he can start chanting, chant with him. Create some kind of new atmosphere around him. Prepare him to receive death, and that may become his most valuable experience in life.

So go there, but don’t go crying and weeping. If you want to cry and weep, cry and weep here before you go – be finished with it! Cry and weep and get into it – completely clean yourself. Go absolutely joyous, with total acceptance, almost with reverence for death – only then can you share something with him.

An old man was dying – he was one of my friend’s grandfather – and he was always against god, against prayer, against meditation, but in the last days he remembered me and he asked me to come. I enquired as to why. He said ’Now I feel that I have missed something and if you can come and be with me, at least for a few days…. And I am going, I am going fast.’

So I went and stayed with the old man. After three days he died, but those three days were a beautiful experience. Because of death he became very receptive, he dropped his argumentativeness – he was an argumentator. He was not in the mood, not in a situation, to argue. Mm? – death was coming so there was no point; he wanted to learn. I have never found such a disciple! He was really keen to learn meditation – naturally so because the doctors had said that at the most he would survive for one week, not more than that.

He also had a sort of cancer, a very fast-growing cancer: you detect it and within a week you are gone. Nothing can be done about it – it spreads so fast that there is no way to do anything. So I remained with him…. I would just sit by his side and would tell him to just be silent, to feel me, and I would hold his hand. He had terrible pain, each moment was of great pain He couldn’t sleep without tranquillisers – even with tranquillisers it was difficult – and death was closing in.

But the second day, in the morning I was holding his hand almost for four, five hours, and then he suddenly said, ’But this is unbelievable – I am falling silent! It is incredible! The pain is there and I am feeling separate from it.’ I said, ’Keep quiet – this is the moment of meditation. Keep quiet and feel it!’ And the day he died, he died utterly a new man.

The third day he was completely aloof from the body – he was crying with joy! He died a religious man, almost a saint! And when he died, not only he felt – his whole family felt a sudden change. Just before he died, near around two hours before, he was in utter pain but yet not in pain at all. He stopped all medication…. So you just go, mm? And when will you be able to come back? How long will you take?