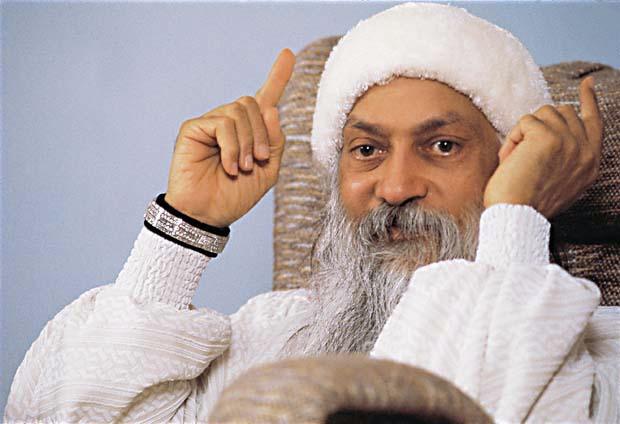 Question : Osho, you say: go beyond the mind. Do not listen to its chatter. Discipline it and make it a servant. Do not be its slave. But how to know when the mind is being disciplined and when it is being repressed? Also, when i took sannyas the other night you said not to get hooked on you. I have to tell you that you are closing the stable door after this particular horse has already bolted.

Osho : Prem Lisa, THE DIFFERENCE IS SO GREAT that it is impossible to miss it. Repression happens through fighting with your mind. Discipline happens through being watchful, aware, alert. In discipline, there is no fight implied. In discipline, there is no condemnation, no evaluation. One simply looks at the mind silently, seeing the whole traffic, without saying what is right and what is wrong, what should be and what should not be, just as, standing by the side of the road, you watch the people walking by — saints and sinners, beautiful people, ugly people, good people, bad people — but you are unconcerned. It has nothing to do with you; you are out of it.

That’s exactly the meaning of the English word “ecstasy”. Ecstasy means to be out of the mind. You are just looking, as one looks at the clouds moving in the sky or at the river flowing by — cool, detached. Neither are you trying to cling to something nor are you trying to push something away from you. This is pure awareness: you are only a mirror. And in just being a mirror, the miracle happens — the miracle of discipline. Slowly slowly, the traffic starts disappearing. Less and less thoughts are moving on the road, less and less pictures are appearing on the screen, less and less memories, fantasies. Gaps start appearing.

A mother was telling her child, “Be very careful when you go to school because the traffic is dangerous at rush hour time.”
The child said, “Don’t be worried. I always wait by the side of the road. When a gap comes by, then I cross the road.”

“When a gap comes by…” As you are looking at your mind you will be surprised: gaps come by, intervals when there is nothing to be seen. The observer remains alone and because it is alone it is no longer an observer either. You can’t call it an observer because there is nothing to observe. The mirror is there, but it is not reflecting anything. There is no duality of the seen and the seer. In these intervals discipline arises.

The word “discipline” is also beautiful. It is sometimes very significant to go to the roots of words. “Discipline” comes from a root which means learning. When you are looking at a gap, learning happens. Learning about what? Learning about yourself, because there is nothing else. You are full of awareness. You are just full of your own being, overflowing. And this experience of just being yourself, overflowing, undistracted by anything, undisturbed by anything, is the greatest learning, the greatest possibility of knowing the truth. This is discipline.

Lisa, discipline can never be misunderstood as repression. Repressions are totally different. In repression you have already decided what is wrong — a priori decisions. In fact, others have decided for you what is wrong and what is right. Now you are simply trying to impose the ideas and opinions of others upon yourself. You will have to repress your nature. You will have to force that which is wrong — or which you have been told is wrong — deep into the unconscious. There will be a fight, great turmoil. Instead of bringing silence to you, every method of repression brings more turmoil.

That’s why the so-called religious people are more restless, more worried. You are worried only about this world, they are worried even about the other. You are worried only about this life, they are worried about many many past lives and future lives. Your worries are nothing compared to the worries of the so-called religious people. And they are sitting on a volcano, because whatsoever is repressed is there; it is not destroyed. Repression never destroys anything; you are simply sitting on top of it. And the danger is that you cannot sit on top of it for twenty-four hours a day; you have limitations. You will get tired, you will need some rest. And whenever you will be tired and you will need rest, repressions will start arising in you. Hence, even your greatest saints go on thinking, fantasizing, dreaming about all those things that they have repressed.

Mahatma Gandhi has written in his autobiography: “I have been able to control my sexuality as far as my day is concerned, but in the night, in my dreams, it comes with a vengeance.” This he was writing at the age of seventy… a whole life of repression! Yes, in the day you can somehow manage, but in the night, in the dreams, that which you have repressed in the day is bound to take revenge. It will come back, it will explode in you.

Hence, down the ages your saints have been very much afraid of sleep. They go on cutting down on their sleep — five hours, four hours, three hours, two hours. And the less they sleep the greater the danger, because all their repressions have to come in those two hours in a very condensed way. Then they are crowding in from everywhere. And people worship them! The less a saint sleeps, the more people worship him. They say, “Look how much he has sacrificed! What a great austerity he is doing — he is not even sleeping! Or he sleeps for only two hours or one hour.”

The reality is that he is afraid of sleep. And from where is the fear coming? The fear is coming from the fact that when you are awake you can control, but when you are asleep, who is there to control? The controller is asleep, is in a relaxed state. He cannot sit on top of all the repressions, and they will assert themselves.

You are surrounded by many darknesses: greed, anger, jealousy, lust, ambition, ego. These are layers of darkness. If you start fighting with all these layers of darkness you are not going to win, because there is no way to fight with darkness directly. Darkness does not exist in the first place; it is only the absence of light. So if you want to do something with darkness, don’t try to do it directly, do something with light. If you want darkness, put the light out. If you don’t want darkness, put the light on. But do something with the light, forget about darkness. If the light is there, darkness is not there. If the light is not there, you cannot avoid darkness. You can close your eyes, you can try to forget about it, you can become occupied somewhere else, you can take your mind far far away from it, but it is there all the same. And it will show in your acts, in your thoughts, in your behavior. It will come up again and again. You cannot hide it — it is impossible to hide it. The truth of your being, whatsoever it is, is bound to surface.

Lisa, become aware. And I am not saying what is wrong and what is right. I am simply saying: Be aware; or, awareness is right and unawareness is wrong. When you are aware, things will start changing of their own accord, and then the mind functions as a servant. It is a machine, a beautiful machine, one of the most complex machines invented by nature in thousands of years. Man has not yet been able to create anything comparable to it. Even the best computer is not yet so capable.

A single human mind can contain all the libraries of the world. It is almost infinite. Its capacity is great, its use is great, but it should be your servant not your master. As a servant it is beautiful; as a master it is dangerous.

Let consciousness be your master and mind your servant. It happens through awareness. And I am not telling you to control it, because all control is repression. I am not telling you to fight, because all fight is a sheer waste of energy. You are fighting with your own servant — you are wasting your energy. You need not fight with your servant, you have simply to say, “I am the master”; that’s all. You have simply to be the master, that’s all, and the servant bows down. The servant immediately understands that the master has come in. And how does the master come in? The moment you become awake, the master comes in.

You ask me, Lisa: You SAY: GO BEYOND THE MIND. DO NOT LISTEN TO ITS CHATTER. DISCIPLINE IT AND MAKE IT A SERVANT. DO NOT BE ITS SLAVE. BUT HOW TO KNOW WHEN THE MIND IS BEING DISCIPLINED AND WHEN IT IS BEING REPRESSED?

It is very simple. Nobody can ever mistake the two, nobody can ever confuse the two. They are so different — just like light and darkness, just like love and hate, just like flowers and thorns, just like poison and nectar. They are so totally different! But if you think about them you may get confused. In thinking you cannot make the distinction. Don’t think about them — experiment, experience, and the distinction will be absolutely clear.

You also say: OSHO… WHEN I TOOK SANNYAS THE OTHER NIGHT YOU SAID NOT TO GET HOOKED ON YOU. I HAVE TO TELL YOU THAT YOU ARE CLOSING THE STABLE DOOR AFTER THIS PARTICULAR HORSE HAS ALREADY BOLTED.

Lisa, I am not only a horse doctor but a horse lover too! And when I see a good horse I immediately fall in love. I believe in love at first sight, because it saves time! The moment I saw you, Lisa, the moment I saw tears of joy, love, trust and surrender in your eyes, I accepted you deep down as part of the orange Mafia!

And I say, “Don’t get hooked on me,” only when I know that you are absolutely hooked and there is no way to escape! I don’t say it to everybody. I say it only to those who are already in. They may not be aware of it; they may become aware of it later on.

I have seen it. You are hooked, you are stoned on me. Now there is no going back. Now this is going to be your whole world. I am your home. I say it only when I am absolutely certain, categorically certain, that there is no possibility of your going away, when I see that you are melting and merging. Then only, just to be generous, do I say, “Don’t get hooked on me.” I can afford to say it when I know that Lisa is finished!