Osho – Jesus loved. That was one of his crimes: that he loved. 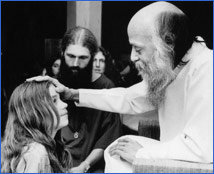 Question – It is believed that Christ was the first politician of love in that he tried to save the world before he had saved himself, and that we are his children: politicians of love, seeking heaven on earth.

Osho – Politician, and Christ? Politics and love are impossible to be together. Love is anti-political; politics is anti-love. I know politicians talk about love, but don’t be deceived by their talk. They talk about peace and prepare for war. Never listen to what the politician says; always watch what he is doing. Whatsoever he says may be just a distraction, to distract you so you cannot see what he is doing. He goes on saying things absolutely contrary to what he is doing. That saying is a camouflage. It is a cover to hide.

That’s why politicians go on talking — so that you are not in any way helped to be aware of what they are doing. They distract by their talk. They don’t communicate, they don’t say much. In fact, they want to hide so that things are not known. They talk about peace and they all prepare for war. They talk about love and they all create hatred in the world.

But they are very tricky — diplomatic. They talk about love and they sow the seeds of hatred, they talk about nonviolence and they prepare you for violence. They say they are preparing for war because without war. peace will be impossible. And they have talked such nonsense for so long that you don’t even understand how contradictory they are. Then the whole humanity goes on moving in darkness.

Jesus is totally different. He says and preaches whatsoever he lives. When you preach whatsoever you live, you are exposed. You are open and vulnerable. You are true to yourself, but then you start becoming unfit with the society. Society is politics, it is diplomacy. Many things are not to be said, many things have to be said which are not true.

When Pontius Pilate asked Jesus, “What is truth?” Jesus remained silent. He could have said something, he was an articulate man. He was a great poet in his utterances, he could have said something. And his whole life was depending on that. That was the last thing Pilate asked: “What is truth?” Jesus looked into his eyes and remained silent. Very undiplomatic, very nonpolitical. He embarrassed Pilate.

In that silence, Pilate felt very restless and uncomfortable. Jesus penetrated him deeply. His silence was something that he was saying from his heart. But Pilate wanted words. Pilate was not asking, “Show me the truth!” He was asking, “What is truth? ” He was asking for a definition. Jesus wouldn’t give the definition because HE was truth — and he was standing in front of him! He looked into his eyes. He must have stirred his soul. Pilate became uneasy. He turned away from Jesus. He said to the priest, “Take this man away and do whatsoever you like. Crucify him.”

I always think about it. In that moment, Pilate must have felt as if he was being crucified in silence. Just think about Jesus looking at you. All your falseness, all your masks, fall away because they cannot be there when Jesus looks at you. Naked and nude you stand before him. Empty, with nothing.

Pilate was the governor-general of the Roman Empire. But inside, a poor man, a beggar. All that falseness cannot deceive Jesus; he penetrates deeply. All your worldly riches are useless. He looks deep down into you and the beggar is caught. The beggar starts becoming restless. This was not asked for.

If Jesus was a little diplomatic, he would have given a philosophical answer. Pilate was a student of philosophy; he would have understood. Jesus could have convinced him, argued, persuaded. Pilate may have saved Jesus his life. But rather than saying anything he created a climate, a situation in which Pilate became very restless.

Just think: Jesus is looking in you. Silence becomes embarrassing. This man seems to be dangerous, as if he is pushing a dagger in your heart. Suddenly Pilate must have felt the emptiness, the poverty that he was. He turned aside. He said to the priest, “Take this man away and do whatsoever you like.” But he must not have slept that night, or even for months. Jesus must have haunted him.

A very nondiplomatic answer. Jesus should have said the same thing that Pilate believed. That would have been diplomacy. Politicians say only the things you already believe. Then you are with them. They don’t disturb, they console. Their answers are like ointments.

Jesus’ answer to the question, “What is truth?” — his answer is like a wound in the heart. For his whole life Pilate must have been haunted by the silence. “What did this man mean? Why did he remain silent, why did he look so deeply within me? Why?” In his dreams it must have become a nightmare.

Jesus never condemns, Jesus never creates any guilt. Jesus never says, “That is sin. Don’t do it.” He reveals what is sin, but he never says it. He makes you understand what is sin, but he never gives you a dead dogma in the hand. In life, dead dogmas are useless. Only an alive consciousness is useful because every moment the sin and the virtue changes. Something was a virtue in the morning. It may not be virtuous in the evening. It depends on you, on others, on circumstances. It is not a dead thing that you can carry with you. It is changing every moment. Unless you have a flexibility, a sensitivity to change with life, you will not be able to know what is sin. Every moment life goes on moving. Something was virtuous in a certain moment. The same thing can become a sin in another moment. So no dogma is possible.

Jesus gives a sensitivity to people. an awareness, a mindfulness, a meditation, so that they can feel their way, so that they can understand every situation and respond accordingly. If you go deeply into Jesus you will understand only one thing: that to act with awareness is virtue and to act with unawareness is sin. Sin is not a quality of any act. Neither is virtue. Sin and virtue belong to the presence or absence of awareness. It is not WHAT you do which is sin or virtue. it is HOW you do it: aware or unaware. It doesn’t depend on the action. It depends, deep down, on the consciousness — what quality you bring to it.

Jesus loved. That was one of his crimes: that he loved. A rabbi should preach, he should not love. A religious man should become an example, and induce and seduce people to follow his example. He was not an example at all. In the ordinary sense, he was not creating any ideal of his own. He was simply helping people to be more prayerful, to be more mindful, to be more watchful. And he lived, and loved.

But they cannot understand because it is beyond them. They cannot see the point: that somebody is not interested in government, in governing people. They think there must be some deception; something is hidden behind it. They think my talk about religion — changing the individual, loving the individual — is just a facade. Behind it there must be politics. They can understand only politics, and they will see politics everywhere.

It is understood. I can understand it. They cannot go beyond their own minds. It is just like a pickpocket who comes to see a saint. He cannot see the saint, he only looks at the pockets. He is a pickpocket. You walk on the road. Different people look at you in different ways. A shoemaker looks at your shoe and understands you according to the situation and the condition of the shoe. If the shoe is in a bad condition he knows that your economic position is not okay. If the shoe is not polished well he knows you may be unemployed. He need not see your face; he just Looks at your shoe.

If a man has been working on shoes for thirty, forty years, he becomes almost a psychologist. From the shoe he can say everything: what your financial position is, what your status in society is. Even what your mind is right now. When you are happy, you walk differently. When you are unhappy, you drag. The shoe can show that you have been dragging for long, as if you are pulling the whole load, the weight.

A shoemaker looks at the shoe, a pickpocket looks at the pocket, a hairdresser looks at the hair. He knows whether you are a square or a hippy. Your hair will show it. And this is not new. In India one of the names of Krishna is Keshava. Keshava means’long-haired’. He was the first hippy in the world.

When a politician looks at a Jesus, or at me, immediately his understanding is political. He becomes afraid, he thinks a competitor has come. But Jesus is not a politician, a man who knows love cannot be a politician. Why? — because politics is ambition; love is nonambitious.

Politics is a way to rule over others. Love never wants to rule. The very effort to rule and possess and be powerful is violent. It is part of hatred. Love gives, and gives unconditionally. Love does not possess. Love is not a monopoly, is not a power-lust.

If the heart of man changes, the society is bound to change, because with a different man a different society will arise. But that is a consequence. Jesus is not interested in that. His whole interest is in how the kingdom of God can be felt within. That’s why he goes on insisting, “The kingdom of God is within.” It has nothing to do with the without. Politics is without; religion is within. Love gives, politics takes; love shares, politics has nothing to share. It tries to possess.