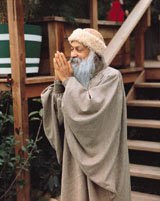 Osho – One of Jesus’ very significant parables has been lost completely. Just a reference is made to it in LUKE, but the complete parable is not in any of the authorized gospels, not even in the fifth gospel of Thomas. Some hidden sources, some secret societies, have continuously been meditating on that parable.

I would like to tell it to you. The parable is so significant that it may be because of its significance that it has not been included in the authorized gospels. The parable seems to be dangerous. The implications of it are of tremendous import and significance.

The parable is about someone secretly sowing weeds in a wheat field while the master and his servants slept. The servants were all for cutting them quickly out, but the master said that at harvest time one could more effectively separate the wheat from the tares. The servants consulted together, saying, “It would be much better to pull out those weeds right now rather than wait, but we must obey the master even when he is wrong. In the meantime, let us look for the enemy who would do this evil thing to our master who is so kind to everyone and doesn’t deserve this treatment.”

They quietly inquired and made a search of the whole region, but they could not find anyone; they could not find the enemy. One of the servants came privately to the chief steward at night saying, “Sir, forgive me, but I can no longer bear to conceal my secret. I know the enemy who sowed the tares. I saw him do it.”

At this, the chief steward was astonished and full of anger. But before punishing him, he demanded of the servant why he had not come forward sooner.

“I dared not,” cried the servant. “I scarcely dared to come and tell you this even now. I was awake the night the weeds were sown, I saw the man who did it. He walked past me, seemingly awake and yet asleep. He did not appear to recognize me, but I recognized him.”
“And who was he indeed? ” asked the chief steward in great excitement. “Tell me so he can be punished.”
The servant hung his head. Finally, in a low voice, he replied, “It was the master himself.”

And the two agreed to say nothing of this to any man.

The enemy is not outside. If it was outside, it would not have been difficult to get rid of him. You could have escaped. But you cannot escape from the enemy because it is within. The beloved, the friend, is also not outside. Otherwise you could have searched, and once found by one man, there would have been no difficulty for others to follow. Just as it happens in science: the truth is outside.