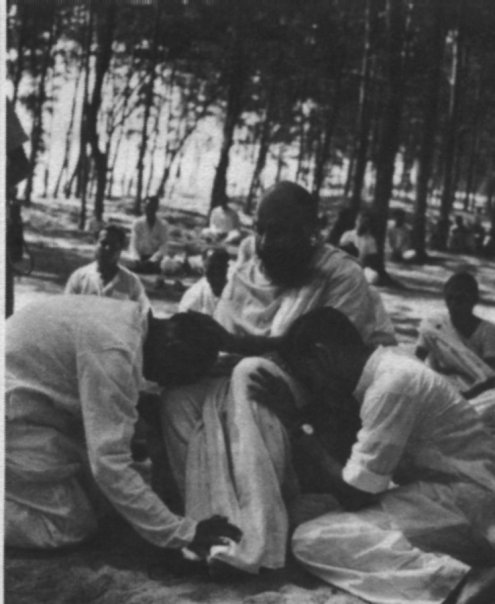 When you come to a living Master, deep down something in you wants to bow down. It is not that you are going to do a certain formality — if you are doing, it is meaningless. But something really down in your spirit, deep in your spirit, deep in your center, wants to bow down. Then bowing to a Master is no more ritualistic. It is alive, it is meaningful, it is not an empty gesture. But you can just go on bowing down to anybody, because you have been taught to bow down — then it is useless. Try to see the difference. When something is born into you out of your spontaneity, then it is true. When you have to do something as a duty, it is untrue. `Duty’ is a dirty word. If something is born out of love, good. If something is born out of duty, avoid it, never do it — because that is dangerous. If you learn the ways of duty too much, you will forget the ways of love. Duty is against love. Duty is a false substitute for love.

Religion is not in the rituals. Of course, whenever there is religion there is ritual — but that is a totally different matter. How can you avoid when Buddha walks amongst you, how can you avoid touching his feet? Impossible. You can do only two things and both are rituals: either you have to touch his feet, or you have to throw stones at him. Both are rituals — one is that of the enemy and one is that of the friend, but both are rituals. You cannot neglect Buddha, you cannot be indifferent, that’s all. The phenomenon is such that you cannot just bypass. Either you have to become a friend or you have to become an enemy; you have to choose. You have to have an attitude — that attitude is ritual. But then it is born into your heart, not learned from somebody else. It simply arises in your being.

Religion, wherever it is, always brings rituals; but when the religion disappears, the rituals become dead. Don’t carry the corpse. Yes, you loved your mother very much and now she is dead — what are you going to do? Are you going to carry her corpse for your whole life? You have to burn it or bury it. You have to get rid of it, you cannot go on carrying it. But this same thing happens as far as religion is concerned. You loved the Buddha so much, and great passion arose in your soul, and great worship and great songs were born in his presence… now he is gone, you continue the song. By and by, it is a far away echo of the echo… goes on fading.

Nobody can be born into a religion, religion has to be born into you. You have to open your soul and receive religion. It is showering all around… but you are carrying toys, substitutes, false coins, in your hands, and thinking you are having religion. In the church it is not, in the mosque it is not, in the temple it is not. Go somewhere where a living Master is: it is there. And that too exists only for a few moments — the Master is gone, and the religion disappears.

Hence Kabir’s insistence for a SATGURU — for a true Master Religion is individual, one has to seek it on one’s own. It is not a social phenomenon, it has nothing to do with the crowd and the collective. It is a private thing, as intimate as love. You come to it alone, in deep intimacy, privacy… you open your heart. Religion is spontaneous in the sense that you cannot learn it. You can be it, but you cannot learn it. It is as spontaneous as love.

Have you ever learnt what love is?And that day will be a doomsday, when man will have to learn how to love. That day seems to be coming closer every day, in the West particularly, and more particularly in America. Books are being written: How to Love, How to be Friendly — foolish books, because if man has forgotten how to love, no book can teach it. To teach humanity how to love is as if somebody goes to the fish and teaches the fish to swim — that will be foolish. And so is the case with religion. Religion cannot be taught, it can only be caught; it is a sort of infection. You can go wherever a holy person exists and you can catch it, you can imbibe it.