Osho on Khajuraho Temples, Osho on Tantra temples of Khajuraho 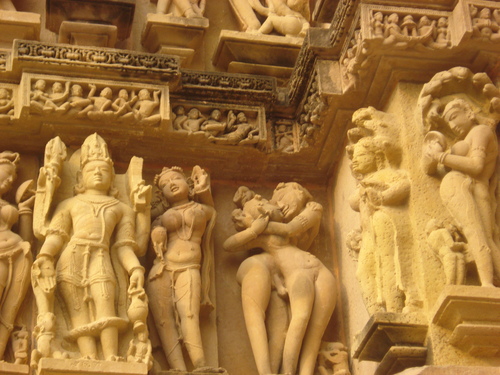 Osho on Khajuraho Temples – Khajuraho or Konarak — if you meditate there, you will know what the Tantra masters were doing. They were creating in stone something that is felt in the ultimate orgasmic joy. It was the most difficult thing to do, to bring ecstasy into the stone. And if the stone can show the ecstasy, then everybody can move into that ecstasy easily. But people who go to Khajuraho are foolish people.

Sit silently and meditate for hours. If one goes to Khajuraho, one should live at least for three months there, so he can meditate on each possible inner posture of orgasmic joy. And then, slowly slowly, the at-onement, slowly slowly, the harmony; then suddenly you are transported into another world — the world of those mystics who created this temple. This is objective art.

Osho on Khajuraho Temples – A man who cannot love cannot be creative in any sense. Why should he make a beautiful statue of a woman or a man? Why should he make beautiful statues of women in Khajuraho in India?
I am aware of all the best sculptures around the world: nothing is comparable to Khajuraho. Thousands of beautiful women in one temple… and there are thirty temples still in perfect shape. There used to be one hundred temples. Seventy temples are in ruins, but in those ruins also you can find beautiful pieces.

Osho on Khajuraho Temples – If you see the temples of Khajuraho in India…. Once there were one thousand temples in that place; now only ruins are there, but twenty or thirty temples are still intact, have survived. Just to see one temple you will need the whole day. It is so full of art, every nook and corner. It must have taken hundreds of years for thousands of sculptors to make one temple.

You cannot find a single inch of space in the whole temple which has not been artistically created. One temple has thousands of statues on the outside of the temple, and that is the same about the remaining other thirty, and the same must have been true about the ruins of one thousand temples. Even in the ruins you can find treasures of art. I don’t think there has ever been such beauty created out of stone anywhere else in the world.

The structure of every temple is almost the same. On the outer side of the temple, the outer wall, there are what are called mithun statues — men and women naked, loving, making love, in all the possible postures one can imagine or dream of. The only posture that is missing is known in India as the missionary posture — man on top of woman: only that is missing — that was brought by Christian missionaries.

Otherwise the whole idea, to the Indian mind, looked ugly — that the man should be on top of the woman. Seems to be unfair. The woman is more fragile, and this beast is on top of the beauty. No, Indians have never thought of that posture as human. In India it is known as the missionary posture because the first time they saw it, it was Christian missionaries in that posture; otherwise they had no idea that this could be done.

But, except that, you will find all kinds of postures, because in India sexology has existed at least for five thousand years. The oldest sexual scripture is five thousand years old — Vatsyayana’s Kamasutras. And in the time of Vatsyayana, writing sutras on sex — kama means sex — maxims for sex, guidelines for sex, was not thought to be a bad act; Vatsyayana is respected as one of the great seers of India, and it is said that only a seer like Vatsyayana could have given those beautiful sutras. They reveal the intricacies and the mysteries of the energy of sex, and how it can be transformed.

These temples in Khajuraho have, on the outer side, beautiful women, beautiful men, and all in love postures. Inside there are no love postures. Inside you will find the temple empty, not even a statue of God. The idea is that unless you pass through your sexuality with full awareness, in all its phases, in all its dimensions — unless you come to a point when sex has no meaning for you… only then you enter the temple. Otherwise you are outside the temple, your interest is there.

So that was a symbol that if you are still interested in sex, then the temple is not for you. But the message is not against sex; it is the outer wall of the temple, the temple is made of it, and you have to pass through the door and go beyond. And the beyond is nothing but utter emptiness.

One thought on “Osho on Khajuraho Temples, Osho on Tantra temples of Khajuraho”