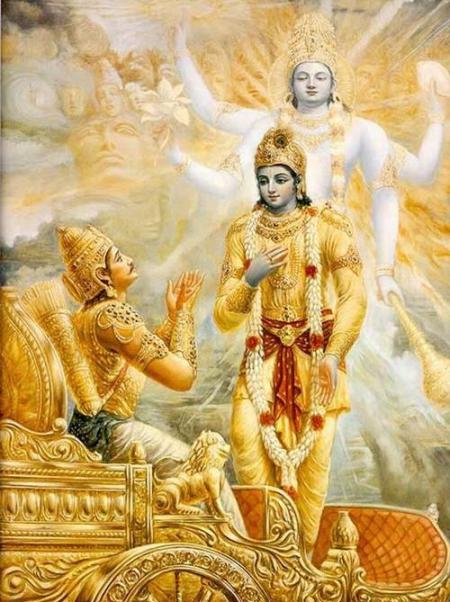 Osho : Krishna is utterly incomparable, he is so unique. Firstly, his uniqueness lies in the fact that although Krishna happened in the ancient past he belongs to the future, is really of the future. Man has yet to grow to that height where he can be a contemporary of Krishna’s. He is still beyond man’s understanding; he continues to puzzle and battle us. Only in some future time will we be able to understand him and appreciate his virtues. And there are good reasons for it.

The most important reason is that Krishna is the sole great man in our whole history who reached the absolute height and depth of religion, and yet he is not at all serious and sad, not in tears. By and large, the chief characteristic of a religious person has been that he is somber, serious and sad-looking – like one vanquished in the battle of life, like a renegade from life. In the long line of such sages it is Krishna alone who comes dancing, singing and laughing.

Religions of the past were all life-denying and masochistic, extolling sorrow and suffering as great virtues. If you set aside Krishna’s vision of religion, then every religion of the past presented a sad and sorrowful face. A laughing religion, a religion that accepts life in its totality is yet to be born.

And it is good that the old religions are dead, along with them, that the old God, the God of our old concepts is dead too It is said of Jesus that he never laughed. It was perhaps his sad look and the picture of his physical form on the cross that became the focal point of at traction for people, most of whom are themselves unhappy and miserable. In a deep sense Mahavira and Buddha are against life too.

They are in favor of some other life in some other world; they support a kind of liberation from this life. Every religion, up to now, has divided life into two parts, and while they accept one part they deny the other, Krishna alone accepts the whole of life. Acceptance of life in its totality has attained full fruition in Krishna.

That is why India held him to be a perfect incarnation of God, while all other incarnations were assessed as imperfect and incomplete. Even Rama is described as an incomplete incarnation of God. But Krishna is the whole of God. And there is a reason for saying so. The reason is that Krishna has accepted and absorbed everything that life is.

Albert Schweitzer made a significant remark in criticism of the Indian religion. He said that the religion of this country is life negative. This remark is correct to a large extent, if Krishna is left out. But it is utterly wrong in the context of Krishna. If Schweitzer had tried to understand Krishna he would never have said so.

But it was unfortunate that we did not allow Krishna to influence our life in a broad way. He remains a lonely dancing island in the vast ocean of sorrow and misery that is our life. Or, we can say he is a small oasis of joyous dancing and celebration in the huge desert of sadness and negativity, of suppression and condemnation that we really are. Krishna could not influence the whole spectrum of our life, and for this we are alone to blame.

Krishna is not in the least responsible for it. We were not that worthy, that deserving, to have him, to imbibe him, to absorb him. Up to now, man’s mind has thought of and looked at life in fragments – and thought dialectically. The religious man denies the body and accepts the soul. And what is worse, he creates a conflict, a dichotomy between the body and spirit.

He denies this world, he accepts the other world, and thus creates a state of hostility between the two. Naturally our life is going to be sad and miserable if we deny the body, because all our life’s juice – its health and vitality, its sensitivities and beauty, all its music – has its source in the body. So a religion that denies and denounces the body is bound to be anemic and ill, it has to be lackluster.

Such a religion is going to be as pale and lifeless as a dry leaf fallen from a tree. And the people who follow such a religion, who allow themselves to be influenced and conditioned by it, will be as anemic and prone to death as these leaves are. Krishna alone accepts the body in its totality. And he accepts it not in any selected dimension but in all its dimensions. Apart from Krishna, Zarathustra is another. About him it is said he was born laughing.

Every child enters this world crying. Only one child in all of history laughed at the time of his birth, and that was Zarathustra. And this is an index – an index of the fact that a happy and
laughing humanity is yet to be born. And only a joyful and laughing humanity can accept Krishna. Krishna has a great future. After Freud the world of religion is not going to be the same as it was before him.

Freud stands as a watershed between the religions of the past and the religion of the future. With Freud a great revolution has taken place and man’s consciousness has achieved a breakthrough. We shall never be the same again after Freud. A new peak of consciousness has been touched and a new understanding, an altogether new perspective, a new vision of life has come into being. And it is essential to understand it rightly.

The old religions taught suppression as the way to God. Man was asked to suppress every thing – his sex, his anger, his greed, his attachments – and then alone would he find his soul, would he attain to God. This war of man against himself has continued long enough. And in the history of thousands of years of this war, barely a handful of people, whose names can be counted on one’s fingers, can be said to have found God.

So in a sense we lost this war, because down the centuries billions of people died without finding their souls, without meeting God. Undoubtedly there must be some basic flaw, some fundamental mistake in the very foundation of these religions. It is as if a gardener has planted fifty thousand trees and out of them only one tree flowers – and yet we accept his scripture on gardening on the plea that at least one tree has blossomed.

But we fail to take into consideration that this single tree might have been an exception to the rule, that it might have blossomed not because of the gardener, but in spite of him. The rest of the fifty thousand trees, those that remained stunted and barren, are enough proof the gardener was not worth his salt.

If a Buddha, a Mahavira or a Christ attains to God in spite of these fragmentary and conflict-ridden religions, it is no testimony to the success of these religions as such. The success of religion, or let us say the success of the gardener, should be acclaimed only when all fifty thousand trees of his garden, with the exception of one or two, achieve flowering. Then the blame could be laid at the foot of the one tree for its failure to bloom.

Then it could be said that this tree remained stunted and barren in spite of the gardener. With Freud a new kind of awareness has dawned on man: that suppression is wrong, that
suppression brings with it nothing but self-pity and anguish. If a man fights with himself he can only ruin and destroy himself. If I make my left hand fight with my right hand, neither is going to win, but in the end the contest will certainly destroy me.

While my two hands fight with themselves, I and I alone will be destroyed in the process. That is how, through denial and suppression of his natural instincts and emotions, man became suicidal and killed himself. Krishna alone seems to be relevant to the new awareness, to the new understanding that came to man in the wake of Freud and his findings. It is so because in the whole history of the old humanity Krishna alone is against repression.

He accepts life in all its facets, in all
its climates and colors. He alone does not choose he accepts life unconditionally. He does not shun love; being a man he does not run away from women. As one who has known and experienced God, he alone does not turn his face from war. He is full of love and compassion, and yet he has the courage to accept and fight a war.

His heart is utterly non violent, yet he plunges into the fire and fury of violence when it becomes unavoidable. He accepts the nectar, and yet he is not afraid of poison. In fact, one who knows the deathless should be free of the fear of death. And of what worth is that nectar which is afraid of death?

One who knows the secret of non-violence should cease to fear violence. What kind of non-violence is it that is scared of violence? And how can the spirit, the soul, fear the body and run away from it? And what is the meaning of God if he cannot take the whole of this world in his embrace?