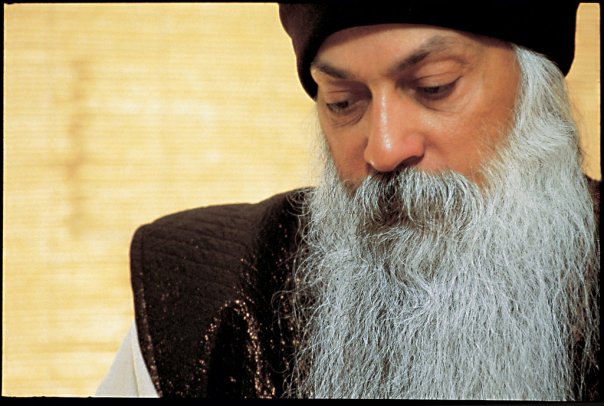 Osho – Being is one, the world is many…and between the two is the divided mind, the dual mind. It is just like a big tree, an ancient oak: the trunk is one, then the tree divides into two main branches, the main bifurcation, from which a thousand and one bifurcations of branches grow. The being is just like the trunk of the tree — one, non-dual — and the mind is the first bifurcation where the tree divides into two, becomes dual, becomes dialectical: thesis and antithesis, man and woman, yin and yang, day and night, God and Devil, yoga and Zen. All the dualities of the world are basically in the duality of the mind — and below the duality is oneness of being. If you slip below, underneath the duality you will find one — call it God, call it nirvana, or whatsoever you like.

If you go higher through the duality, you come to the many million-fold world. This is one of the most basic insights to be understood — that mind is not one. Hence, whatsoever you see through the mind becomes two. It is just like a white ray entering a prism; it is immediately divided into seven colors and the rainbow is created. Before it entered the prism it was one, through the prism it is divided. and the white color disappears into the seven colors of the rainbow. The world is a rainbow, the mind is a prism, and the being is the white ray.

The left hand is concerned with the right hemisphere — intuition, imagination, myth, poetry, religion — and the left hand is very much condemned. The society is of those who are right-handed — right-handed means left hemisphere. Ten per cent of children are born left-handed but they are forced to be right-handed. Children who are born left-handed are basically irrational, intuitive, non-mathematical, non-Euclidean… they are dangerous for society so it forces them in every way to become right-handed. It is not just a question of hands, it is a question of inner politics: the left-handed child functions through the right hemisphere — that society cannot allow, it is dangerous, so he has to be stopped before things go too far.

It is suspected that in the beginning the proportion must have been fifty-fifty — lefthanded children fifty per cent and right-handed children fifty per cent — but the righthanded party has ruled so long that by and by the proportion has fallen to ten per cent and ninety per cent. Even amongst you here many will be left-handed but you may not be aware of it. You may write with the right hand and do your work with the right hand but in your childhood you may have been forced to be right-handed. This is a trick because once you become right-handed your left hemisphere starts functioning. The left hemisphere is reason; the right hemisphere is beyond reason, its functioning is not mathematical. It functions in flashes, it is intuitive, very graceful — but irrational.

The left-handed minority is the most oppressed minority in the world, even more than Negroes, even more than the poor people. If you understand this division, you will understand many things. With the bourgeoisie and the proletariat the proletariat is always functioning through the right hemisphere of the brain: the poor people are more intuitive. Go to the primitive people, they are more intuitive. The poorer the person, the less intellectual — and that may be the cause of his being poor. Because he is less intellectual he cannot compete in the world of reason. He is less articulate as far as language is concerned, reason is concerned, calculation is concerned — he is almost a fool. That may be the cause of his being poor.

The rich person is functioning through the left hemisphere; he is more calculative, arithmetical in everything, cunning, clever, logical — and he plans. That may be the reason why he is rich. The bourgeoisie and the proletariat cannot disappear by communist revolutions, no, because the communist revolution is by the same people. The Czar ruled Russia; he ruled it through the left hemisphere of the mind. Then he was replaced by Lenin who was of the same type. Then Lenin was replaced by Stalin who was even more of the same type.

The revolution is false because deep down the same type of people are ruling — the ruler and the ruled mean the same, and the ruled are those of the right-sided hemisphere. So whatsoever you do in the outside world makes no difference really, it is superficial. The same applies to men and women. Women are right-hemisphere people, men are lefthemisphered.

Men have ruled women for centuries. Now a few women are revolting but the amazing thing is that these are the same type of women. In fact they are just like men — rational, argumentative, Aristotelian. It is possible that one day, just as the communist revolution has succeeded in Russia and China, somewhere, maybe in America, women can succeed and overthrow men. But by the time the women succeed, the women will no more be women, they will have become left-hemisphered. Because to fight, one has to be calculative, and to fight with men you have to be like men: aggressive.

Fighting with anybody is very dangerous because you become like your enemy. That is one of the greatest problems of humanity. Once you fight with somebody, by and by you have to use the same technique and the same way. Then the enemy may be defeated but by the time he is defeated you have become your own enemy. Stalin is more Czar-like than any Czar, more violent than any Czar. Of course it has to be so: to throw Czars, very violent people are needed, more violent than the Czar himself. Only they will become the revolutionaries, will come out on top. By the time they reach there they have become Czars themselves, and the society continues on the same way. Just superficial things change, deep down the same conflict remains.

The conflict is in man. Unless it is resolved there, it cannot be resolved anywhere else. The politics is within you; it is between the two parts of the mind. A very small bridge exists. If that bridge is broken through some accident, through some physiological defect or something else, the person becomes split, the person becomes two persons — and the phenomenon of schizophrenia or split personality happens.

If the bridge is broken — and the bridge is very fragile — then you become two, you behave like two persons. In the morning you are very loving, very beautiful; in the evening you are very angry, absolutely different. You don’t remember your morning… how can you remember? Another mind was functioning — and the person becomes two persons. If this bridge is strengthened so much that the two minds disappear as two and become one, then integration, then crystallization, arises. What George Gurdjieff used to call the crystallization of being is nothing but these two minds becoming one, the meeting of the male and the female within, the meeting of yin and yang, the meeting of the left and right, the meeting of logic and illogic, the meeting of Plato and Aristotle. If you can understand this basic bifurcation in your tree of then you can understand all the conflict that goes on around and inside you.