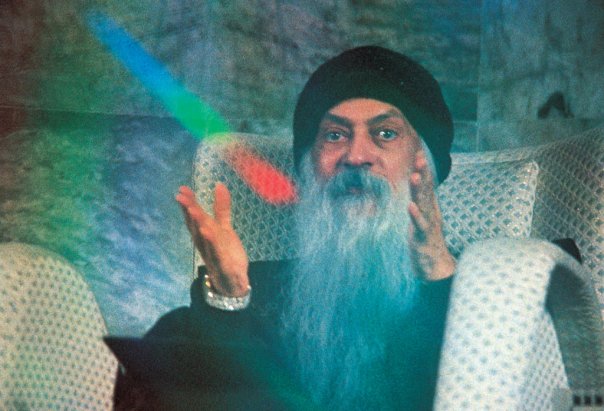 Question – Osho, do you profess licentiousness in life?

Osho – I don’t profess anything. I simply clarify things to you, I don’t profess. I am not giving you any ideology, I am only giving you insight. Take note of the difference. An ideology has to be professed, an insight has to be imparted. I simply make things clear to you, I simply help you to clarify things. I am not giving you a dogma. I am not giving you a theory that will solve all your problems — there is none. I am simply telling you: Open your eyes, become more aware. And that awareness will help you in every kind of difficulty, in every kind of problem. That awareness will be like a light in the dark night. And wherever you go that light will remain with you, you will be able to see.

I don’t give you a theory. You have depended too much on theories. Theories are cheap, because they don’t require any transformation on your part. Dogmas are very easy to accept. Then you have an idea which you go on trying to fit everywhere in your life, and you start depending on the idea. That dependence on the idea makes you more and more blind. If you are a Christian you are blind, if you are a Hindu you are blind, if you believe in any dogma you are blind. Because only blind people believe.

I help you to see. That’s what Buddha says: ‘IHI PASSIKA — Come and see.’ You see the difference? Jesus says ‘Come and follow me.’ Buddha says ‘Come and see.’ Both are enlightened — but Jesus must be talking to a very low level of consciousness, he has to say ‘Come and follow me.’ ‘Follow me’ means believe. Buddha must be talking to highly evolved conscious people, he says ‘Come and see.’ There is no question of following anything, there is no question of believing in anything. He just says ‘I have seen — come and see through my eyes. Just come close to me and see through my window. Maybe that will give you an insight and you can open your own window.’

I also say to you: IHI PASSIKA — Come and see. Seeing is a totally different matter. I don’t teach anything, I am not a teacher. In fact I destroy teachings. I don’t help you to learn anything, in fact I help you to unlearn. You have already learned too much.

But the question is relevant. Many people interpret me in that way, they think I am professing licentiousness. I am neither professing licentiousness nor am I professing repression. I am simply helping you to see a saner way of life. Licentiousness is insane, as much insane as repressiveness. They are two extremes. And the mind always feels good to move from one extreme to another extreme. It is like the pendulum. The pendulum goes on moving from one extreme to another extreme. And if you look deep into the pendulum, if you meditate on it, you will come upon many truths. One, when the pendulum is moving to the right it is gaining momentum to go to the left. When it is moving to the left it is gaining momentum to go to the right. It looks as if it is going to the left, but it is accumulating energy to go to just the opposite direction. Opposites depend on each other. And that’s how the human mind goes on moving.

Christianity created a very repressive atmosphere in the West. That has created licentiousness. For your sinners, your saints are responsible. The world will never be without sinners unless it decides to be without saints. The saint creates the sinner, the saint cannot exist without the sinner. They are partners, they are together.

The Vatican has some deep support for the playboy. If you are repressive you will create pornography. If you are repressive, people will start finding ways and means to go to the other extreme. Because normality is not allowed. Life has been forced to be either white or black — either be a saint or be a sinner. The priests have not allowed you the possibility that there is something else too. Life really is grey. It is neither black nor white. Black and white are two extremes of grey, but life remains grey.

I am neither teaching licentiousness nor repressiveness. I am simply helping you to become sane. It is your life, it is nobody else’s life. And you have to be sane about it, otherwise you will miss the great opportunity, the great blessing, the great gift of God. Don’t be repressive, otherwise one day, in this life or in some other life, you will become licentious. And don’t be licentious, otherwise in this life or in some life you will become repressive. The pendulum goes that way. The pendulum has to stop in the middle. And have you watched? If the pendulum stops in the middle, the clock stops.

When the mind stops in the middle, time stops. When the mind stops in the middle, the world stops. And in that silence one knows God. But listening to me — and you are all carrying a thousand and one repressions — you listen through the screen of your repressions and you interpret that it is licentiousness. Your unconscious is too full of repressions. I am not teaching anything like that, I am simply saying to be a man is enough. You need not be a saint and then you will not need to be a sinner. Be natural. Don’t interfere with your nature, don’t mould it into pattern. Don’t be ideological and don’t be always hankering to be somebody else. Don’t hanker for betterment, just be natural and relax into your being. And whatsoever is natural is good.

I have heard: A Cockney was in great difficulties over which of his two girlfriends he should marry. One was called Margaret and the other Maria. The first was rich but very ugly, and the second was poor but immensely beautiful. So he was divided. The head was saying ‘Marry the rich girl and then you will have no problems. And what is ugliness? You will become accustomed to it. And even beauty is so fragile — today it is there, tomorrow it may not be there. And if you get even the most beautiful woman, after a few days you become accustomed to it and the beauty disappears. It is only a question of a few days. Marry the rich girl.’ But the heart was longing for the beauty. And he was going nuts.

A friend said to him ‘Ere, Bert, why don’t you go to Lourdes?’
‘Lourdes?’ said Bert. ‘Where’s that?’
‘It’s in France’ said his friend. ‘It’s a sort of shrine where people go to get cured. But maybe you could find the answer to your problem there — you know, a sort of miracle from heaven!’

So Bert saved up and went over to Lourdes. A week later he was back and his friend asked him how he had got on. ‘Great!’ said Bert. ‘I got the answer all right. I went into the big church place — and there, up at the altar, was a statue of Our Lady of Lourdes with a big banner next to it, saying “Ave Maria”.’
So he married Maria, the beautiful girl.

When you hear, it depends on you what color you will give it to it. You are already too full of repressions, you are ready to become licentious — so when you hear me you interpret it as licentiousness. It is nothing of the sort. Be very careful with me.

I have heard: It was some time since Patrick and Michael had met, so Michael was anxious to hear if there had been any addition to Patrick’s family.
‘Not one’ answered Patrick very sadly. ‘We’ve still got the four.’
‘Still four?’ said Michael. ‘Are you at the birth-control or something?’
‘Not exactly’ replied Patrick. ‘You see, it’s all to do with this new hearing-aid.’
‘What do you mean — this new hearing-aid?’
‘Well, you see, when Bridget and I would get to bed, I’d say to her “Darling, is it sleep or what?” And Bridget would reply “What?” And we would make love. But now, with this new hearing-aid of hers, when I say to her “Well, dear, is it sleep or what?” she just turns on her side and says “Sleep” and off she goes.’

That ‘what’…. You already have an idea, and the interpretation follows. Listen to me directly, just put your mind aside. That’s why so many therapy groups are being run here. Just to help you to put your mind aside. Just to help you to see your unconscious, to help you to cathart your unconscious, to vomit it. So that you can become more and more empty and can listen to me through your emptiness. Otherwise you are carrying so much rubbish, rubbish of the ages. You have been going through so many ideals, ideologies, you have accumulated so much nonsense. And when you hear me, that nonsense comes in-between.

I am neither for repression nor for licence, they are both aspects of the same coin. The whole coin has to be thrown into the Ganges. You have to become natural, you have to accept all that you are. In that acceptance is flowering. All is good that God has given to you. How can it be otherwise? — it is a gift from God.

So listen to me, not through your thoughts, your prejudices. Listen to me without your prejudices, just put the mind aside. While listening to me don’t go on interpreting, while listening to me get en rapport with me. Don’t be in a hurry to conclude; that hurry is harmful. You are in such a hurry to conclude, you want to achieve some results so fast, that’s why you go on missing many things. There is no hurry and there is no need to conclude right now. While listening to me, first listen TOTALLY. And then later on you can think about it. If you have listened rightly then your thoughts will not be able to distort the meaning, they will not be able to distract you. Once you have listened rightly, without any interpretation, without any thinking about it, then later on you can bring your whole mind to it. There will be no problem, you will have followed what I have said to you.

Otherwise, while listening to me you are continuously thinking by the side. While you are listening to me you are thinking — many thoughts are going, rushing in and out. They are very very dangerous. Then whatsoever conclusion you arrive at through them will be your conclusion, will not be mine. But it feels good to throw the responsibility on me. You have become so disrespectful towards yourself that you always throw the responsibility on somebody else. You have forgotten that you are responsible to yourself. Only you. All that happens to you and all that is going to happen to you is going to happen through you. You are wholly and solely responsible for your life. Nobody else is the saviour. And you cannot throw your responsibilities on me. If you want to be licentious BE licentious. I am nobody to interfere — who am I? If you want to be repressive be repressive. But don’t impose meanings on what I say.