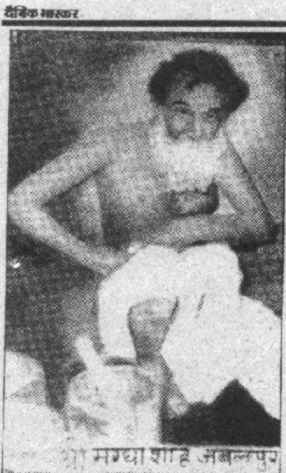 Osho : On this pilgrimage I have met many more remarkable men than Gurdjieff recounts in his book MEETINGS WITH REMARKABLE MEN. By and by, as and when it happens, I will talk about them. Today I can talk about one of those remarkable men.

His real name is not known, nor his real age but he was called ”Magga Baba.” Magga simply means ”big cup.” He always used to keep his magga, his cup, in his hand. He used it for everything – for his tea, his milk, his food, for the money people gave him, or whatsoever the moment demanded. All he possessed was his magga and that is why he was known as Magga Baba. Baba is a respectful word. It simply means ”grandfather,” your father’s father.

In Hindi your mother’s father is Nana, your father’s father is Baba. Magga Baba was certainly one of the most remarkable men that may ever have lived on this planet. He was really one of the chosen ones. You can count him with Jesus, Buddha, Lao Tzu. I know nothing about his childhood or his parents. Nobody knows from where he came – one day suddenly he appeared in the town.

He did not speak. People persisted in asking questions of all kinds. He either remained silent, or if they nagged too much he started shouting gibberish, rubbish, just meaningless sounds. Those poor people thought he was speaking in a language that perhaps they didn’t understand. He was not using language at all.

He was just making sounds. For example, ”Higgalal hoo hoo hoo guloo higga hee hee.” Then he would wait and again ask, ”Hee hee hee?” It seemed as if he was asking, ”Have you understood?”
And the poor people would say, ”Yes, Baba, yes.”

Then he would show his magga and make the sign. This sign in India means money. It comes from the old days when there were real gold and silver coins. People used to check whether it was real gold or not, by throwing the coin to the ground and listening to its sound.

Real gold has its own sound, and nobody can fake it. So Magga Baba would show his magga with one hand and with the other give the sign for money, meaning, ”If you have understood then give something to me.” And people would give. I would laugh myself to tears because he had not said anything. But he was not greedy for money. He would take from one person and give it to another. His magga was always empty. Once in a while there would be something in it, but rarely.

It was a passage: money would come into it and go; food would come into it and go; and it always remained empty. He was always cleaning it. I have seen him morning, evening and afternoon, always cleaning it. I want to confess to you – ”you” means the world – that I was the only person to whom he used to speak, but only in privacy, when nobody else was present.

I would go to him deep in the night, perhaps two o’clock in the morning, because that was the most likely time to find him alone. He would be hugged up in his old blanket, on a winter’s night, by the side of a fire. I would sit at his side for a while. I never disturbed him; that was the one reason why he loved me. Once in a while it would happen that he would turn on his side, open his eyes and see me sitting there and start talking of his own accord.

He was not a Hindi-speaking person so people thought it was difficult to communicate with him, but that is not true. He was certainly not a Hindi-oriented person, but he knew not only Hindi but many other languages too. Of course he knew the language of silence the most; he remained silent almost all his life. In the day he would not speak to anybody, but in the night he would speak to me, only when I was alone. It was such a blessing to hear his few words.

Magga Baba never said anything about his own life, but he said many things about life. He was the first man who told me, ”Life is more than what it appears to be. Don’t judge by its appearances but go deep down into the valleys where the roots of life are.” He would suddenly speak, and suddenly he would be silent. That was his way. There was no way to persuade him to speak: either he spoke or not. He would not answer any questions, and the conversations between us two were an absolute secret. Nobody knew about it. This is for the first time that I am saying it.

I have heard many great speakers, and he was just a poor man, but his words were pure honey, so sweet and nourishing, and so pregnant with meaning. ”But,” he told me, ”you are not to tell anybody that I have been speaking to you, until I die, because many people think I am deaf. It is good for me that they think so. Many think that I am mad – that is even better as far as I am concerned.

Many who are very intellectual try to figure out what I say, and it is just gibberish. ”I wonder, when I hear the meaning that they have derived from it. I say to myself, ‘My God! If these people are the intellectuals, the professors, the pundits, the scholars, then what about the poor crowd? I had not said anything, yet they have made up so many things out of nothing, just like soap bubbles.’”

For some reason, or maybe for no reason at all, he loved me. I have had the fortune to be loved by many strange people. Magga Baba is the first on my list. The whole day he was surrounded by people. He was really a free man, yet not even free to move a single inch because people were holding on to him. They would put him into a rickshaw and take him away wherever they wanted.

Of course he would not say no, because he was pretending to be either deaf or dumb or mad. And he never uttered any word that could be found in any dictionary. Obviously he could not say yes or no; he would simply go. Once or twice he was stolen. He disappeared for months because people from another town had stolen him.

When the police found him and asked him whether he wanted to return, of course he did his thing again. He said some nonsense, ”YUDDLE FUDDLE SHUDDLE….”The police said, ”This man is mad. What are we going to write in our reports: ‘YUDDLE FUDDLE SHUDDLE’? What does it mean? Can anyone make any sense out of it?” So he remained there until he was stolen back again by a crowd from the original town. That was my town where I was living soon after the death of my grandfather.

I visited him almost every night without fail, under his neem tree, where he used to sleep and live. Even when I was sick and my grandmother would not allow me to go out, even then, during the night when she was asleep, I would escape. But I had to go; Magga Baba had to be visited at least once each day. He was a kind of spiritual nourishment.

He helped me tremendously although he never gave any directions except by his very being. Just by his very presence he triggered unknown forces in me, unknown to me. I am most grateful to this man Magga Baba, and the greatest blessing of all was that I, a small child, was the only one to whom he used to speak. Those moments of privacy, knowing that he spoke to no one else in the whole world, were tremendously strengthening, vitalizing.

If sometimes I would go to him and somebody else was present, he would do something so terrible that the other person would escape. For example he would throw things, or jump, or dance like a madman, in the middle of the night. Anybody was bound to become afraid – after all, you have a wife, children, and a job, and this man seems to be just mad; he could do anything. Then, when the person had gone we would both laugh together.

I have never laughed like that with anybody else, and I don’t think it is going to happen again in this lifetime… and I don’t have any other life. The wheel has stopped. Yes, it is running a little bit, but that is only past momentum; no new energy is being fed into it. Magga Baba was so beautiful that I have not seen any other man who can be put by his side.

He was just like a Roman sculpture, just perfect. Even more perfect than any sculpture can be, because he was alive – so full of life, I mean. I don’t know whether it is possible to meet a man like Magga Baba again, and I don’t want to either because one Magga Baba is enough, more than enough.

He was so satisfying and who cares for repetition? And I know perfectly, one cannot be higher than that. I myself have come to the point where you cannot go any higher. Howsoever high you go, you are still on the same height. In other words, there comes a moment in spiritual growth which is untranscendable. That moment is called, paradoxically, the transcendental.