Skip to content
Osho on Buddha Buddhism Osho on Zen 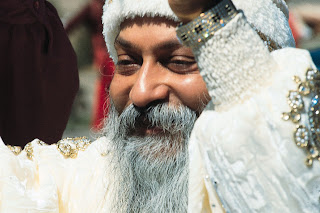 Try to understand this story. Buddha came one morning, and as usual a crowd had gathered, many people were waiting to listen to him. But one thing was unusual — he was carrying a flower in his hand. Never before had he carried anything in his hand. People thought that someone must have presented it to him. Buddha came, he sat under the tree.
The crowd waited and waited and he would not speak. He wouldn’t even look at them, he just went on looking at the flower. Minutes passed, then hours, and the people became very much restless. It is said that Mahakashyap couldn’t contain himself. He laughed loudly. Buddha called him, gave him the flower and said to the gathered crowd, “Whatsoever can be said through words I have said to you, and that which cannot be said through words I give to Mahakashyap.

The key cannot be communicated verbally. I hand over the key to Mahakashyap.” This is what Zen masters call transference of the key without scripture — beyond scripture, beyond words, beyond mind. He gave the flower to Mahakashyap, and nobody could understand what happened. Neither Mahakashyap nor Buddha ever commented upon it again. The whole chapter was closed. Since then, in China, in Tibet, in Thailand, in Burma, in Japan, in Ceylon — everywhere Buddhists have been asking for these twenty-five centuries, “What was given to Mahakashyap? What was the key?”

The whole story seems to be very esoteric. Buddha was not secretive; this was the only incident…. Buddha was a very rational being. He talked rationally, he was not a mad ecstatic, he argued rationally, and his logic was perfect — you could not find a loophole in it. This was the only incident where he behaved illogically, where he did something which was mysterious. He was not a mysterious man at all. You cannot find another master who was less mysterious.

Jesus was very mysterious, Lao Tzu was absolutely mysterious. Buddha was plain, transparent; no mystery surrounds him, no smoke is allowed. His flame burns clear and bright, absolutely transparent, smokeless. This was the only thing that seemed mysterious; hence many Buddhist scriptures never relate this anecdote, they have simply dropped it. It seemed as if someone had invented it. It didn’t make any sense with Buddha’s life and teaching.

But for Zen this is the origin. Mahakashyap became the first holder of the key. Then six holders in succession existed in India, up to Bodhidharma; he was the sixth holder of the key, and then he searched and searched all over India but he couldn’t find a man of the capability of Mahakashyap — a man who could understand silence. He had to leave India just in search of a man to whom the key could be given; otherwise the key would be lost.