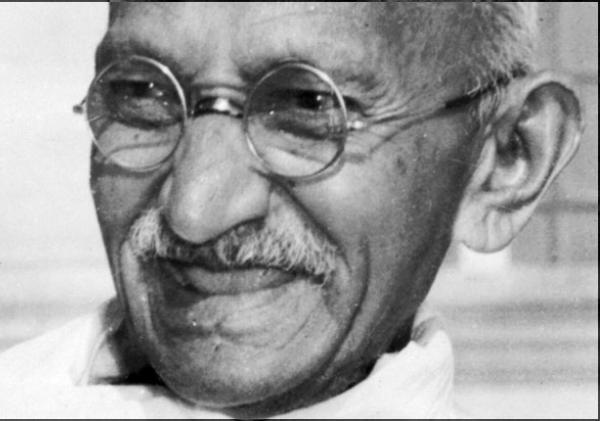 Osho : Hundreds of times we had discussed Mahatma Gandhi and his philosophy, and I was always against. People were a little bit puzzled why I was so insistent against a man I had only seen twice, when I was just a child. I will tell you the story of that second meeting….

I can see the train. Gandhi was traveling, and of course he traveled third class. But his “third class” was far better than any first class possible. In a sixty-man compartment there was just him and his secretary and his wife; I think these three were the only people. The whole compartment was reserved.

I was just ten. My mother–again I mean my grandmother–had given me three rupees. She said, “The station is too far and you may not be back in time for lunch, and one never knows with these trains: it may come ten hours, twelve hours late, so please keep these three rupees.” In India in those days, three rupees was almost a treasure. One could live comfortably for three months on them.

She had made a really beautiful robe for me. She knew I did not like long pants; at the most I wore pajama pants and a kurta. A kurta is a long robe which I have always loved, and slowly slowly the pajama has disappeared, only the robe remains. Otherwise one has not only divided the upper body and the lower body, but even made different clothes for each. Of course the higher body should have something better, and the lower body is just to be covered, that’s all.

She had made a beautiful kurta for me. It was summer and in those parts of central India summer is really difficult because the hot air going into the nostrils feels as if it’s on fire. In fact, only in the middle of the night can people find a little rest. It is so hot in central India that you are continuously asking for some cold water, and if some ice is available then it is just paradise. Ice is the costliest thing in those parts, naturally, because by the time it comes from the factory, a hundred miles away, it is almost gone. It has to be rushed as quickly as possible.

My Nani said I should go to see Mahatma Gandhi if I wanted to and she prepared a very thin muslin robe. Muslin is the most artistic and the most ancient fabric too, as far as clothes are concerned. She found the best muslin. It was so thin that it was almost transparent. At that time gold rupees had disappeared and silver rupees had taken their place. Those silver rupees were too heavy for the poor muslin pocket. Why am I saying it?–because something I’m going to say would not be possible to understand without it.

The train came as usual, thirteen hours late. Almost everybody was gone except me. You know me, I’m stubborn. Even the stationmaster said, “Boy, you are something. Everybody has gone but you seem ready to stay the whole night. There is no sign of the train and you have been waiting since early this morning.”

To come to the station at four o’clock that morning I had to leave my house in the middle of the night. But I had not yet used those three rupees because everybody had brought so many things with them, and they were all so generous to a little boy who had come so far. They were offering me fruits, sweets, cakes and everything, so there was no question of feeling hungry. When the train finally arrived, I was the only person there–and what a person! Just a ten-year-old boy, standing by the side of the stationmaster.

He introduced me to Mahatma Gandhi and said, “Don’t think of him as just a boy. The whole day I have watched him, and I have discussed many things with him, because there was no other work. And he is the only one who has remained. Many had come but they left long ago. I respect him because I know he would have stayed here till the last day of existence; he would not leave until the train arrived. And if the train had not arrived, I don’t think he would ever have left. He would have lived here.”

Mahatma Gandhi was an old man; he called me close and looked at me. But rather than looking at me, he looked at my pocket–and that put me off him forever. And he said, “What is that?”

He said, “Donate them.” He used to have a box with a hole in it by his side. When you donated, you put the rupees in the hole and they disappeared. Of course he had the key, so they would appear again, but for you they had disappeared.

I said, “If you have the courage you can take them. The pocket is there, the rupees are there, but may I ask you for what purpose you are collecting these rupees?”

He said, “For poor people.”

I said, “Then it is perfectly okay.” And I myself dropped those three rupees into his box. But he was the one to be surprised, for when I started leaving I took the whole box with me.

He said, “For God’s sake, what are you doing? That is for the poor!”

I said, “I have heard you already, you need not bother repeating it again. I am taking this box for the poor. There are many in my village. Please give me the key; otherwise I will have to find a thief so that he can open the lock. He is the only expert in that art.”

He said, “This is strange….” He looked at his secretary. The secretary was dumb, as secretaries always are; otherwise why should they be secretaries? He looked at Kasturba, his wife, who said, “You have met your equal. You cheat everybody, now he is taking your whole box. Good! It is good, because I am tired of seeing that box always there, just like a wife!”

I felt sorry for that man and left the box, saying, “No, you are the poorest man, it seems. Your secretary does not have any i ntelligence, nor does your wife seem to have any love for you. I cannot take this box away–you keep it. But remember, I had come to see a mahatma, but I saw only a businessman.”

That was his caste. In India, baniya, businessman, is exactly what you mean by a Jew. India has its own Jews; they are not Jews, they are baniyas. To me, at that age, Mahatma Gandhi appeared to be only a businessman. I have spoken against him thousands of times because I don’t agree with anything in his philosophy of life.