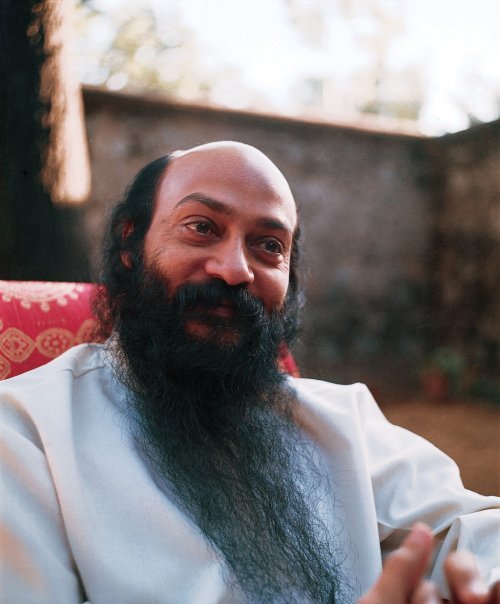 Question – Beloved Master, Is Meditation enough to be whole and healthy? Please explain.

Meditation heals, makes you whole; and to be whole is to be holy. Holiness has nothing to do with belonging to any religion, belonging to any church. It simply means that inside you, you are entire, complete; nothing is missing, you are fulfilled. You are what existence wanted you to be. You have realized your potential.

In the West, meditation has not grown roots, because all three religions in the West — Judaism, and the two offshoots of Judaism — Christianity and Islam — are all prayer-oriented. Prayer and meditation are absolute contraries: prayer moves outwards. Prayer is addressed to a God you know nothing of — just a belief given to you by your parents, society, church, synagogue. You pray, but there is nobody who is listening to your prayer. There is nobody who is going to answer your prayer.

Yes, people who pray may feel good; that does not mean that their prayer has been heard. Just praying, they become silent. Just praying, a certain kind of attitude arises in them; they put aside their ego, they put aside everything else. They become pointedly concentrated on the idea of God. It is their idea, their projection, but it will give them a feeling of well-being. And that well-being is very deceptive; it makes you feel that your prayer is significant. And there must be a God; otherwise, after prayer, why do you feel so quiet, so calm?

So if you are doing the prayer just to feel well-being, there is no harm, it is perfectly good. But it has nothing to do with the search for truth. It has nothing to do with the inquiry into your own being. Meditation moves inwards; prayer directs you outwards. That’s why I say their dimensions are polar opposites. Prayer needs a God, an object. And you can have any kind of object. Hindus have thirty-three million gods. Why have just one, when you are going to imagine? Why be so miserly? Hindus have gods in abundance. You can choose, according to your liking, any kind of god.

To outsiders it looks very strange, but they don’t understand the psychology of prayer. It does not matter what you are praying, to whom your prayer is addressed. All that matters is that you should be concentrated. You can do the same just lying down looking at the light bulb without blinking your eyes, praying — at least the light bulb is not your imagination, it is there — and soon you will fall into a hypnotic trance. And when you wake up you will feel very refreshed, rejuvenated, livelier than ever, younger.

So nothing is wrong as far as all these things are concerned. The problem is, if you think this is religio, this is spiritual growth, then you are falling into a very dangerous fallacy. Religion is a journey inwards, and meditation is the way. What meditation actually does is, it takes you, your consciousness, as deep as possible. Even your own body becomes something outside. Even your own mind becomes something outside. Even your own heart — which is very close to the center of your being — becomes outside. When your body, mind and heart, all three, are seen as outside, you have come to the very center of your existence.

This coming to the center is a tremendous explosion which transforms everything. You will never be the same man again, because now you know the body is only the outer shell; the mind is a little bit inner, but not really your inner core; the heart is a little bit more inner, but still not the innermost center. You are disidentified with all the three.

It is because of this that George Gurdjieff used to call his way “the fourth way” — because if you can transcend these three, you reach the fourth, beyond which there is no way to go. You have come to the very end.

But this gives you many experiences. You start feeling, for the first time, crystallized, not that old wishy-washy person you had always been. For the first time you start feeling a tremendous energy, inexhaustible energy that you were not aware of. For the first time you know that death will happen only to the body, to the mind, to the heart, but not to you.
You are eternal. You have always been here, and you will always be here — in different forms, and ultimately in a state of formlessness. But you cannot be destroyed, you are indestructible. That takes all fear from you. And the disappearance of fear is the appearance of freedom. The disappearance of fear is the appearance of love.

Now you can share. You can give as much as you want, because you are now at the inexhaustible source of living waters. Many who are thirsty will be coming to you. They will find you, there is no need for you to call them; their very thirst will bring you in contact with them. They will come closer to you, because as they come closer they will find their thirst disappearing and a great contentment arising in them. The same as you are, they are becoming.

Meditation makes you whole, makes you holy, and makes you an inexhaustible source for all those who are hungry, thirsty, seeking, searching, groping in the dark. You become a light, and many can share your light. And you can see it: one candle which is lighted can help many candles to be lighted. That does not diminish its own light.

One enlightened being can share his enlightenment and many can become lighted. But his enlightenment is not diminished; on the contrary, it increases. The more he gives, the more he is. A moment comes when he gives himself totally. And that is the moment when he becomes a master. Then those who are ready to take, who are open, available, can take as much as they want.

Meditation is the way to the mastery of your own being. No God is needed, no catechism is needed, no holy book is needed. Nobody is needed to become a Christian or a Jew or a Hindu — all that is sheer nonsense. All that is needed is to find your center, and meditation is the simplest way to find it. It will make you whole, healthy spiritually, and it will make you so rich that you can destroy all the spiritual poverty of the world. And that is the real poverty.

The poverty of physical bodies for food, for clothes, for shelter, can be easily helped by science and technology. But science and technology cannot help to give you blissfulness — that is beyond their scope. And you may have everything that the world can offer, but if you don’t have peace, serenity, silence, ecstasy, you will still remain poor. In fact, you will feel your poverty more than ever, because the contrast will be there. You are living in a golden palace, and you know you are a beggar. The golden palace will become a contrast: now you can see inside there is nothing, you are just empty.

That’s why, as humanity becomes more intelligent, more mature, more and more people start feeling meaninglessness, more and more people start feeling life is accidental, that it is just futile to go on living. The latest developments in philosophy in the West all indicate one thing, that perhaps suicide is the only solution. And of course, if you don’t know your inner world, and you have everything available that the outside world can give to you, suicide will appear to be the only solution.

Meditation can make you inwardly rich. Then suicide is out of the question; even if you want to destroy yourself, there is no way. Your being is indestructible. And to know this immortality is a great freedom — from death, from disease, from old age. All those things will come and go, but you remain untouched, unscratched. Your inner health is beyond any sickness. And it is there, just to be discovered.

2 thoughts on “Osho on Meditation and Healing, Meditation heals, makes you whole”