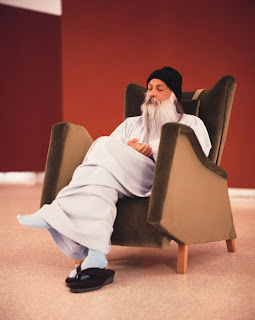 [A forty-eight-year-old sannyasin says he still has a sexual block which he experiences as an unwillingness to say what he really wants when he is with a woman. He has noticed too, that his sexuality seems to be on the decline…. ]

Osho – That time is the time, mm? Somewhere near around forty-nine there comes a menopause… for men too, not only for women. The man’s menopause is very subtle but it is there – now even scientific research says so. This has been a known fact for tantra… because basically the man’s chemistry and the woman’s chemistry cannot be that different – it is different but it cannot be that different.

When a woman becomes sexually mature around twelve, thirteen, fourteen, a man becomes mature around the same time. Then it will be very unfair that the woman has a menopause around forty-nine and that man has no menopause; that will simply prove that god is also a male chauvinist! (laughter) That is unfair and that is not possible.

There is a difference – that’s why it has never been detected up to now – but within these ten years much research has been there and they have come to feel that there is a menopause. Just as the woman has the monthly periods after each twenty-eight days, a man has too. For these three, four days the woman goes into a depressive state, into a negative state – so does a man.

But because the woman’s blood is visible there is no need to prove it and she knows that the period has come and that the depression and the negativity and everything arises; she becomes very very dark, dismal, inside. Man’s release is not that visible, but certain energy is released each month; for three, four days, man also becomes a victim of depression, negativity. If you keep a record for a few months you will be able to see that exactly after twenty-eight days you again become negative for three, four days… out of the blue, for no reason at all.

Just keep a small diary and it will become clear to you…. And it happens around forty-nine. So that menopause is coming closer – nothing to be worried about; it is natural. Sexual energies decline but with the decline of sexual energies, spiritual energies can increase. If one takes a right step then the declining energy of sexuality can become rising energies of spirituality – because it is the same energy that can move upwards and when sex interest becomes lessened, there is more possibility of uplifting the energies.

So don’t take it in a negative way – it can prove a great blessing; just accept it. And there is no need to work upon it, just accept it. Let it be so and don’t think in terms of blocks – now, that will be wrong. If a young man of twenty or twenty-five feels a decline in sexual energy then there is a block, something has to be done. If a man after forty-nine does not feel a sexual decline then something is wrong, something has to be done. That means he is not moving upwards – he is stuck!

And in the West it has become a problem, because in the west sex seems to be the only life. So the moment sexual energy starts declining a man almost feels he is dying. In the east we feel very happy when the sexual energy declines, tremendously happy, because one is finished with that turmoil and that nightmare.

Nothing to be worried about – there is no block there. Within one year things will settle and you will come onto a higher plane: you will be able to see life in a different light and in a different colour. Men will not be so much like men and women will not be so much like women. There will be more human beings in the world rather than men and women… and that is a totally different world – of human beings. In fact to look at a woman as woman, at a man as man, is not right, but sex creates that division. When sex is no more a dividing force, you see human beings.

Source: from Osho Book “This Is It”