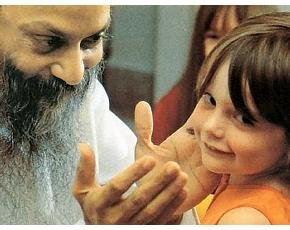 [A sannyasin says: I am pregnant and I want to ask you if I can be a good mother and if the child can be okay. … I wanted a baby so much; that’s why I don’t know. Maybe I’m not strong enough — that’s why I wanted to ask you.
Osho checks here energy.]

Osho – You have a very great desire to be a mother. So be, mm? But be knowing that you are taking on a great responsibility. To become a mother is one of the greatest responsibilities in the world. So many people are on the psychiatrists’ couches and so many people are in madhouses and so many are out of the madhouses. If you go deep into the neurosis of humanity you will always find the mother, because so many women want to be mothers but they don’t know how to be. Once the relationship between the mother and the child goes wrong the child’s whole life goes wrong, because that is his first contact with the world, his first relationship. Everything else will be in continuity with it. And if the first step goes wrong, the whole life goes wrong.

The desire is there — I can feel it… a tremendous desire to be a mother. Nothing is wrong in it, but one should knowingly become a mother. You are taking one of the greatest responsibilities that a human being can take. Men are a little freer in that way because they cannot take the responsibility of becoming a mother. Women have more responsibility. So become a mother, but don’t take it for granted that just by being a woman one is necessarily a mother — that is a fallacy. Motherhood is a great art; you have to learn it. So start learning about it!

A few things I would like to say to you. First, never treat the child as yours; never possess the child. It comes through you but it is not yours. God has only used you as a vehicle, a medium, but the child is not your possession. Love, but never possess the child. If the mother starts possessing the child then the life is destroyed. The child starts becoming a prisoner. You are destroying his personality and you are reducing him to a thing. Only a thing can be possessed: a house can be possessed, a car can be possessed — never a person. So this is the first lesson — get ready for it. Before the child comes you should be able to greet him as an independent being, as a person in his own right, not just your child.

Treat the child as a grown-up, and with great respect. Once you respect the child, you don’t try to impose your ideas on him. You don’t try to impose anything on the child. You simply give him the freedom — freedom to explore the world. You help him to become more and more powerful in exploring the world but you never give him directions. You give him energy, you give him protection, you give him security, all that he needs, but you help him to go farther away from you to explore the world.

And of course in freedom the wrong is also included. It is very difficult for a mother to learn that when you give freedom to a child it is not freedom only to do good. It is also necessarily the freedom to do bad, to do wrong. So make the child alert, intelligent, but never give him any commandments — nobody keeps them, and people become hypocrites. So if you really love the child, the one thing has to be remembered: never, never help him in any way, force him in any way, to become a hypocrite.

And the third thing: don’t listen to the morality, don’t listen to religion, don’t listen to culture — listen to nature. Whatsoever is natural is good — even if sometimes it is very difficult for you, very uncomfortable for you. Because you have been not brought up according to nature. Your parents were not bringing you up with real art, love. It was just an accidental thing. Don’t repeat the same mistakes. Many times you will feel very uneasy….

For example a small child starts playing with his sexual organs. The natural tendency of the mother is to stop the child because she has been taught that this is wrong. Even if she feels that nothing is wrong, if somebody is there she feels a little embarrassed. Feel embarrassed!

That is your problem; that has nothing to do with the child. Feel embarrassed. Even if you lose respectability in society, lose — but never interfere with the child. Let nature take its own course. You are there to facilitate whatsoever nature is unfolding. You are not to direct nature. You are just to be there as a help.

So these three things… and start meditating. Before the child is born you should go as deeply as possible in meditation. When the child is within your womb, whatsoever you are doing continuously goes as a vibration to the child. If you are angry, your stomach has a tension of anger. The child immediately feels it. When you are sad, your stomach has an atmosphere of sadness. Immediately the child feels dull, depressed. The child totally depends on you. Whatsoever is your mood is the mood of the child. The child has no independence right now: your climate is his climate. So no more fighting, no more anger. That’s why I say that to be a mother is a great responsibility. You will have to sacrifice much.

Now during these coming seven months you have to be very very alert. The child is more important than anything else. If somebody insults you, accept it, but don’t get angry. Say, ‘I am pregnant, and the child is more important than getting angry at you. This episode will pass and after a few days I will not remember who has insulted me and what I have done. But the child is going to be there at least seventy, eighty years in the world. It is a big project.’ Even if you want, note it down in the diary. When the child is born, then you can be angry, but not right now. Just say, ‘I am a pregnant mother. I cannot be angry — that is not allowed.’ This is what I call sensitive understanding.

No more sadness, no more anger, no more hatred, no more fighting with Anand Veda. Both have to look to the child. When a child is there you are both secondary; the child has every preference. Because a new life is going to be born… and it is going to be your fruit. If from the very beginning anger, hatred, conflict, enters into the child’s mind, then you are causing hell for him. He will suffer. Then it is better not to bring a child into the world. Why bring a child into suffering? The world is tremendous suffering.

In the first place bringing a child into this world is a very risky affair. But even if you want that, at least bring a child who will be totally different in this world — who will not be miserable, who will at least help the world to be a little more celebrating. He will bring a little more festivity into the world… a little more laughter, love, life.
So for these days, be celebrating. Dance, sing, listen to music, meditate, love. Be very soft. Don’t do anything hectic, in a hurry. Don’t do anything in a tension. Just go slowly. Slow down absolutely. A great guest is to come — you have to receive him. Good, be a mother! Good.

Source – Osho Book “God is Not for Sale”