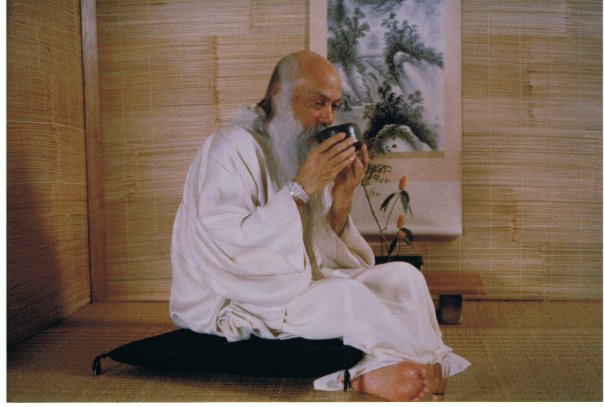 There are two births. One is given to you by your parents; that is a physical birth. That is only an opportunity for the second birth. If you think that the first birth is all, you have missed the whole point. The first birth is only a seed. It is of immense value if the second happens; it is of no value at all if you miss the second birth. You have to be twice-born. That’s how we have defined the buddhas in the East.

The second birth has to happen within you; it is of consciousness. It is not of your body, it is not even of your mind; it is of awareness. Ordinarily, the first birth makes you only a machine. You start living in a very superficial way; you don’t have any depth, you don’t have any soul yet. You eat, you drink, you work, you sleep, but all like a robot. You don’t see the beauty of existence — you can’t see it. You don’t see the godliness of every moment; it is impossible for you to experience it. It needs a transformation of your whole interiority. It needs a new subjectivity, a new vision, a new perspective.

You see in a certain sense, you hear only in a certain sense. Yes, you hear the words, but the meaning is missed. You read the Bible, the Koran, the Vedas, but just like a parrot. Even parrots are far more intelligent than your so-called pundits, than your so-called knowledgeable people. You go on repeating like a gramophone record. And you are so egoistic that you can’t accept, you can’t say, “I don’t know.”

Jascha Heifetz, the distinguished violinist, was in London where he was scheduled to give a concert. A few hours before curtain time, he noticed that a violin string had broken, so he hurried to a music supply shop for a replacement. He was waited on by a girl who was new to the business.
“I would like to have an ‘E’ string for my violin,” said Heifetz.
“A what?” asked the uncomprehending girl.
“An ‘E’ string.”
“Sorry, luv,” she replied apologetically, “but ye will have to pick it out yourself. I can’t tell the he’s from the she’s!”

People are very reluctant to accept the fact that they don’t know. They try in every possible way to manage a facade that they know. This is the greatest mistake in life. You are not yet born, but if you think you are already born, if you think you have already attained to life, then this whole opportunity is going to be lost. It will go down the drain.

And you can learn great words; they are available. You can learn them so much so that if you meet Jesus you may repeat his words better than he can do it himself because you have been repeating them for so long. You may defeat him; in a competition he may not be able to survive at all. Some stupid priest may win the competition because he will be just repeating exactly, word for word. Jesus cannot do that; that is impossible. He has to be spontaneous. He will respond to the situation. He may say some new things — because twenty centuries have passed. How can he go on saying the same old things? Impossible. That’s why the people who believe that they know are the most ignorant in the world. To be ignorant is not that bad, but to believe that you know, without knowing, is very dangerous.

It seems that talking parrots had become quite fashionable. Understandably, Mulla Nasruddin’s wife decided she must have one for herself. However, every store she went to had sold out of parrots. Finally she found a shop that had one left.

“But,” the owner cautioned, “this bird was previously owned by a madam in a whorehouse and its language may be quite salty. Perhaps if you keep him covered for a week, he will forget what he has seen and heard.”

Mrs. Nasruddin purchased the bird and did as the shopkeeper bid. At long last the week was over and the bird was finally uncovered. He first blinked his eyes and then after adjusting to the light looked around and said, “Hmm… pretty new house. Hmm… pretty new madam. Hmm… pretty new girls too.”
Just then Mulla Nasruddin walked in. The bird took one look at him and said, “Ah, shit! Same old customers. Hi, Mulla!”

Bhagwato, when I say the new man, I mean the conscious man. Humanity cannot be saved if the conscious man does not arrive. In the past it was not so necessary, but now it is absolutely necessary, it is a must. If the new man does not arrive on the earth, if more and more people are not going to become conscious, alert, awake, then this earth is doomed. Its fate is in the hand of the stupid politicians, and now they have immense power of destruction, such as they never had before. That is something new.

Just five years ago they had so much power that they could have killed every single human being seven times — although you don’t need to kill any human being seven times, once is enough. We had five years ago so much atomic energy — atom bombs, hydrogen bombs — that we could have destroyed this earth seven times. And within five years we have really progressed — now it is seven hundred times! We can destroy seven hundred earths like this earth, and we go on piling up…. And any moment, any mad politician can trigger the process of self-destruction.

The coming twenty years are going to be the most dangerous in the whole history of humanity; it has never been so dangerous — we are sitting on a volcano. Only more consciousness, more alertness can save it; there is no other way. We have to de-automatize man. The society automatizes you. It creates efficient machines, not human beings.

My effort here is to de-automatize you. I am doing something absolutely antisocial. The society makes you a machine and my effort is to undo it. I would like this fire to spread and reach to all the nooks and corners of the earth, to help as many people as possible to be conscious. If in a great quantity consciousness grows on the earth, there is a possibility, a hope, we can save humanity yet. All is not lost, but time is running short. Everything is being controlled by politicians and by computers, and both are dangerous. Politicians are mad. It is impossible to be a politician if you are not mad enough. You have to be absolutely insane, because only insane people are power-obsessed.

Politicians are insane people. History is enough proof. And now computers are dominating. You know the saying: To err is human…. That is true, but if you really want to create a great mess, human beings are not enough — you need computers. Now machines and mad people are dominating the whole world. We have to change the very foundation. That’s what I mean by a new man.

A new man means more conscious, more loving, more creative. This whole process is possible through being more meditative. Become more meditative, silent, still. Experience yourself deeply. In that experience, a fragrance will be released through you. And if many many people become meditators, the earth can be full of a new perfume.

Source – Osho Book “The Dhammapada, The Way of The Buddha, Vol 10”