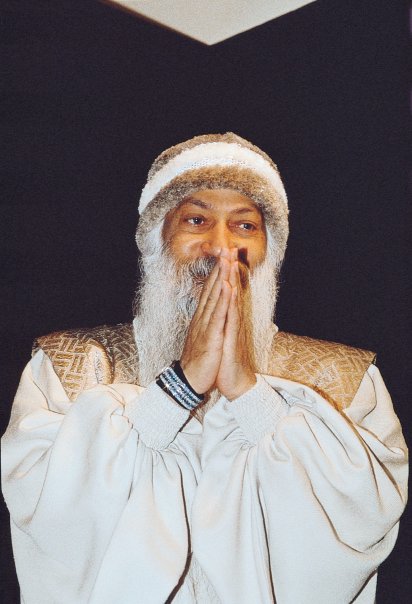 Question: What is the difference between real knowledge and turning the other cheek?

At that moment the saint jumped on the man and started hitting him as hard as he could. The man said, “What are you doing? You are a nonviolent Christian saint.”

He said, “The question finished when you hit me on the other cheek. Jesus has said, `Turn the other cheek’ but there is no third cheek to turn. Now I am free, and I will show you what it means.”

These people don’t understand the idea of nonviolence. They are simply following a certain concept, but every concept has a limitation. Buddha changed it. He said, “I will say seventy-seven times.”

The monk stood up and said, “You can change it, but what about the seventy-eighth time? My argument remains the same. You can make it seven hundred and seventy-seven times, but what about plus one?”

Turning the other cheek is not a nonviolent act. On the contrary, it is very disrespectful of the other person. You are reducing him into a non-human being. He has hit you on your cheek, and you are giving him your other cheek; you are becoming superior and you are putting him into a position of inferiority. This is not nonviolence; this is pure egoism.

Nonviolence simply means that killing, destroying, is ugly. That does not mean that allowing somebody else to do such a thing is not ugly. If somebody hits you on the cheek, you should hit him more strongly on his cheek — for two reasons. One, that you are nonviolent and you don’t allow any kind of violence to anybody, including yourself. Secondly, you have to hit him harder because you respect the other person; if he gives you one rupee’s worth, you give him two rupee’s worth. You don’t make him inferior, you make him superior. I will not say, “Turn the other cheek.”

I will say, “Hit on his cheek as hard as you can so he learns a lesson; otherwise, he will start hitting other people’s cheeks. And you will be responsible for all that violence.” So nonviolence does not mean that you have just to be there, beaten. Then you are allowing violence. This kind of nonviolence has deprived this whole country.

Mahavira and Buddha both in some way or other are responsible for twenty centuries of slavery in India. And Gandhi again repeated like a parrot the same stupid nonsense. Nonviolence simply means you should be so powerful that nobody can be violent towards you. It should not be out of weakness; it should be out of power. Of course you will not hurt anybody out of your power — you will protect, you will not kill. But you won’t allow anybody else to kill you either. So my idea of nonviolence is different from Mahavir, Buddha, Gandhi.

My idea is nonviolence should be out of an abundance of power. Don’t use that power to kill, to destroy; but use that power to create, to protect. And if anybody tries to harm you or anybody else, do everything to prevent that harm.

One thought on “Osho on Non Violence – Nonviolence simply means that killing, destroying, is ugly”