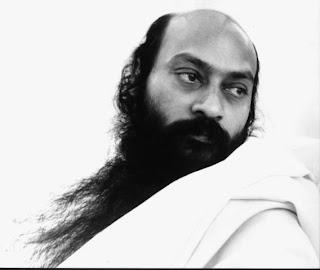 Osho – Pagal Baba was one of those remarkable men whom I am going to talk about. He was of the same category as Magga Baba. He was known just as Pagal Baba. Pagal means ”the mad.” He came like a wind, always suddenly, and then disappeared as suddenly as he had come…. I did not discover him, he discovered me. By that I mean I was just swimming in the river when he passed by: he looked at me, I looked at him, and he jumped in the river and we swam together.

I don’t know how long we swam but I was not the one to say ”enough.” He was already an established saint. I had seen him before, but not so closely, at a gathering, doing bhajan, and singing songs of God. I had seen him, and had a certain feeling towards him, but I had kept it to myself. I had not even uttered a single word about it. There are things which are better kept in the heart; there they grow faster, that’s the right soil.

At this time he was an old man; I was not more than twelve. Obviously he was the one to say, ”Let us stop. I am feeling tired.”
I said, ”You could have told me any time and I would have stopped, but as far as I am concerned I am a fish in the river.”
Yes, that’s how I was known in my town. Who else swims six hours every morning from four till ten? When everybody was asleep, fast asleep, I would be already in the river. And when everybody had gone to work I would still be in the river. Of course at ten o’clock every day my grandmother would come, and then I would have to come out of the water because it was school time, I had to go to school. But immediately after school I was back in the river.
………

Again I am reminded of Pagal Baba, because I was talking about him this morning and I am going to continue. He used to say apparently meaningless sentences to people. Not only that, sometimes actually hitting them! Not like me, but literally, actually. I don’t actually hit, not because I don’t want to, just because I am absolutely lazy. Once or twice I have tried, then my hand hurt. I don’t know whether the person learned anything or not, but my hand said, ”Please don’t try this trick again.”

But Pagal Baba used to hit for no reason at all. Somebody may have been just sitting silently by his side, and he would give the person a good slap. The person had not done anything, he had not even said anything. Sometimes people would object that it was unjust, and say to Pagal Baba, ”Baba, why did you hit him?”

He would laugh and say, ”You know I am pagal, a madman.” That was enough of an explanation as far as he was concerned. That explanation won’t do for me… so mad that even the most intelligent cannot decipher what kind of madness this is. Pagal Baba was a simple madman; I am a multidimensional madman.
………

Pagal tried again and again to convince me that my future was to be a musician. I said ”No,” and when I say no, I mean no. From my very childhood my no has been very clear, and I rarely use yes. That word yes is so precious, almost holy, that it should be used only in the presence of the divine, whether it is love or beauty, or right now… orange blossom on the gulmarg, so thick it is as if the whole tree is aflame.

When anything reminds you of the sacred, then you can use the word yes – it is full of prayer. No simply means that I cut myself off from the proposed activity; and I have been a no-sayer. It was very difficult to get a yes out of me. Seeing Pagal Baba, a man who was known to be enlightened, I recognized that he was unique even in those days. I did not know anything of what enlightenment is. I was in just the same position as I am now, again utterly unknowing. But his presence was luminous.

You could recognize him among thousands. He was the first man who took me to a Kumbha Mela. It takes place every twelve years in Prayag, and is the biggest gathering in the whole world. For Hindus Kumbha Mela is one of their life’s cherished dreams. A Hindu thinks that if you have not been to a Kumbha Mela at least once, you have missed your life. That’s what a Hindu thinks. The minimum count is ten million people, the maximum is thirty million people. It’s the same with the Mohammedans.

Unless you are a haji, unless you have been to Haj, to Mecca, you have missed. Haj means ”journey to Mecca,” where Mohammed lived and died. All over the world it is every Mohammedan’s most precious dream; he has to go at least once to Mecca. The Hindu has to go to Prayag. These places are their Israels. The religions may look very different on the surface, but if you just scratch a little bit you will find the same rubbish; Hindu, Jew, Mohammedan, Christian, it does not matter.

But Kumbha Mela has a unique character. Just a gathering of thirty million people is in itself a rare experience. All the Hindu monks come there, and they are not a small minority. They number five hundred thousand, and they are very colorful people. You cannot imagine so many unique sects. You cannot believe that such people even exist, and they all gather there.

Pagal Baba took me to the first Kumbha Mela of my life. I was to attend once more, but this experience with Pagal Baba, at the Kumbha Mela was immensely educating, because he took me to all the great, and the so-called great saints, and in front of them, and with thousands of people around, he would ask me, ”Is this man a real saint?”

I would say, ”No.”
But Pagal Baba was also as stubborn as I am, he did not lose heart. He went on and on, taking me to every kind of saint possible, until I said to one man, ”Yes.”
Pagal Baba laughed and said, ”I knew that you would recognize the true one. And this man,” he pointed to the man about whom I had said yes, ”he is a realized one, not known to anybody.”

The man was just sitting under a peepal tree, without any followers. Perhaps he was the loneliest man in that great crowd of thirty million people. Baba first touched my feet, then his feet. The man said, ”But where did you find this child? I never thought a child would be able to recognize me. I have hidden myself so perfectly. You can recognize me, that’s okay, but how could he do it?”

Baba said, ”That’s the puzzle. That’s why I touch his feet. You touch his feet right now.”
And who could have disobeyed that ninety-year-old man? He was so majestic. The man immediately touched my feet. That’s how Pagal Baba used to introduce me to all kinds of people. In this circle I am mostly talking of the musicians, because they were his love affair. He wanted me to become a musician, but I could not fulfill his desire because for me music, at the most, can only be an entertainment.

I told him exactly in those same words, saying, ”Pagal Baba, music is a much lower kind of meditation. I am not interested in it.”
He said, ”I know, it is. I wanted to hear it from you. But music is a good step to go higher; no need to cling to it, or to remain on it. A step is a step to something else.”

That’s how I have used music in all my meditations, as a step to something – which is really ”the music” – soundless. Nanak says, Ek omkar sat nam: there is only one name of God, or of truth, and that is the soundless sound of OM. Perhaps meditation came out of music, or perhaps music is the mother of meditation. But music itself is not meditation. It can only indicate, or be a hint….