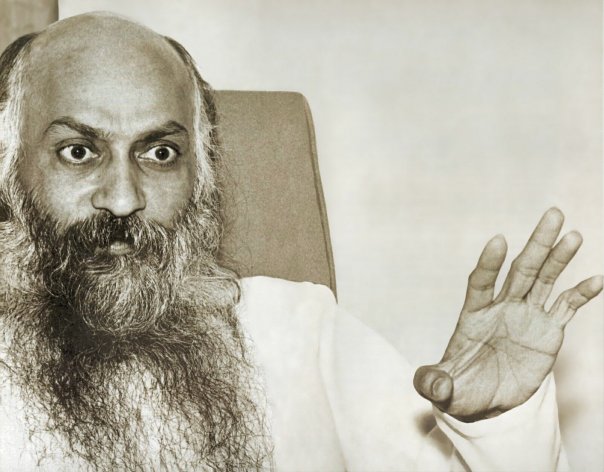 Osho – Those lines have nothing to do with the future. We can cut both your hands off — still there will be a future. We can do plastic surgery and remove your whole skin — still there will be a future. Those lines are simply the fold marks of your hand. But we want to be irresponsible. Deep down we want somebody else to take the responsibility. Some god should take the responsibility and write your fate.

I used to live in Raipur. Living just in front of me was an astrologer, the best in Raipur. His fees were very high and every day there was a crowd of people asking him about their sons’ and daughters’ marriages. One day I told him, “You are deciding the future of other people. What about yourself?” Because his wife used to beat him!

He said, “It is all business. I don’t know what these lines mean, they don’t mean anything at all. My whole life I have been matching — but nothing matches.”

A deep desire not to take responsibility is behind the whole game, and the man who is not ready to take responsibility has refused to be a man — he has fallen from human dignity. Once another astrologer was very much interested in reading my hands, my birth chart. I said, “I don’t have any birth chart, but hands you can read. But before you read my hands look carefully at your hands.”
He said, “Why?”

I said, “That will be decided later on.” He worked hard, consulted his scriptures and then he said many things. I said, “Thank you.”
He said, “What about my fees?”

I said, “I told you that before reading my hands you should look at your own hands. You should have seen that this man is not going to give you the fees. If you cannot predict such a small thing, and so urgent, then everything else must be meaningless.”

Man is born as a tabula rasa — plain unwritten freedom. And this is his glory. A dog can only be a dog and nothing else — that is determined. A dog has a fate, all your astrologers should move towards dogs, cats and all kinds of animals; they have a determined nature. If you study a buffalo you will see that she will not eat any kind of grass, only a particular grass.

Man has risen above the animals, and the basic evolution in man is that he has freed himself from all fetters that blind him. He is totally free to create himself, whatever he wants to be. Every opportunity is available. He can reach to the highest peak of consciousness, he can fall to the lowest depth of darkness. He carries both heaven and hell within him. But except himself, nobody else can decide it and nobody else can predict it.

In Bombay, a few friends brought a great and famous astrologer. I said to the astrologer, “You can predict only for one year from today, and I will tell you in writing that whatever you predict I will do absolutely the opposite. Even to the point that if you say that I will live a long life, I will die. But I will not support any slavery.”

The man looked around at the people who had brought him and said, “Where have you brought me? This man is dangerous. If he commits suicide, I will be caught. Why did you tell him that he would live long, when he has said that he will do exactly the opposite?”

I said, “Just for a small experiment you can say that I will not hit you and I will hit you right now. That will be decisive.”

He was very angry. I said, “That does not matter. What matters is that my actions are my actions and I take the whole responsibility of my actions. Good or bad, but I do not want to throw them on the shoulders of God, fate, kismet, all that nonsense. It is time that we should get rid of it. It has kept this country poor because what can you do? — your poverty is written in the stars. You cannot stop the growing population. What can you do? — children are sent by God. You don’t take any responsibility for anything. Without responsibility there is no freedom, and without responsibility you fall down to the level of animals, not man. Astrology is for animals, not for man.