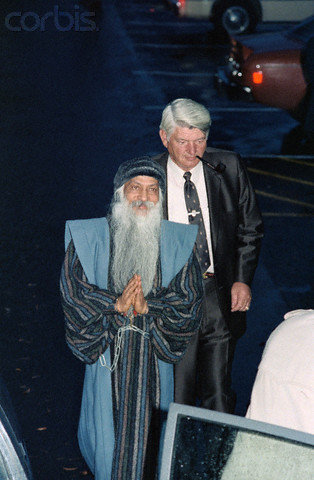 Question : Peace of mind can be gained by withdrawal from the world, by stilling the vortices of the mind. But how much inner peace is appropriate in a world that contains attica, vietnam, johannesburg, biafra, pakistan and sub-sahara africa?

Osho : The world contains Vietnam, Attica, and things like that, because the peace of mind is missing. The root cause is that man is not silent. Hence violence, all kinds of violence. Because of Vietnam and because of Attica, much peace of mind is needed. They are symptoms of something like cancer inside human consciousness. They are not diseases themselves, they are simply symptoms. And they cannot be cured directly — until and unless the root cause is cut absolutely, destroyed absolutely.

Man has lived in war, down the ages, always. Out of three thousand years, only seven hundred years were not of war — and not in one stretch. Sometimes for one day there was no war on the earth, sometimes for a few days; otherwise the war has continued.

War is the greatest thing that man has remained involved with. Destruction seems to be very very attractive; killing and murder seems to be the goal of the human mind. In three thousand years, man has fought five thousand wars. Vietnam is nothing new, it is as ancient as man. It is not something that is happening today, it has been always there — because man is ill.

And you ask me, HOW MUCH INNER PEACE IS APPROPRIATE…? As much as you can manage — the more you have, the better. Because only pools of peace will destroy the compulsive attraction towards violence. Only pools of peace all over the world, many many Buddhas, will be able to create a new vibe, a new wave, a new consciousness, in which war becomes impossible — in which all energy moves in a creative way, all energy moves towards love.

So don’t say… I understand the logic of it. The logic is, if man becomes very peaceful then he will not bother about Vietnam. I understand what you mean by your question. You mean, if people become very silent and very peaceful they won’t care what is happening in the world around them, they will become indifferent. So how much peace is appropriate? — that’s why you ask the question.

But try to understand. The war is not the disease itself. Peace is missing in the heart — hence the war exists. The war is a consequence: more peace, less war. If peace becomes predominant, war will disappear. War cannot disappear by the efforts of people who call themselves pacifists. War cannot disappear because of Bertrand Russell. War cannot disappear because there are people who are against war — no. The people who are against war will create another war. You can see, if you have observed a pacifist-protest, you can see how war-like they are — shouting, screaming, protesting…. You can see in their faces they are dangerous people. They may call themselves pacifists, but they don’t know what peace means. They are very argumentative, arrogant, ready to fight.

It almost always happens that a peace-protest becomes a battle-field between the police and the pacifists. The pacifist is not really the man of peace. He is against war. He is so much against war that he will be ready to go to war if that is needed. The cause changes, the war continues.

A man of peace is not a pacifist, a man of peace is simply a pool of silence. He pulsates a new kind of energy into the world, he sings a new song. He lives in a totally new way — his very way of life is that of grace, that of prayer, that of compassion. Whomsoever he touches, he creates more love-energy.

The man of peace is creative. He is not against war, because to be against anything is to be at war. He is not against war, he simply understands why war exists. And out of that understanding he becomes peaceful. Only when there are many people who are pools of peace, silence, understanding, will the war disappear. But withdrawal is not the way to attain peace. You say, PEACE OF MIND CAN BE GAINED BY WITHDRAWAL… Never. Never has it been gained that way.

You can go to a Catholic monastery — there is a kind of peace, the same that exists in the graveyard. You can go to the Jaina monks and you will see a kind of peace — the same that exists in a graveyard. These people are dead! They have renounced life. The day you renounce life you renounce responsibility, you renounce all kinds of commitments. You renounce all possibilities to live, to relate, to love. They may not be fighting, but they are no more loving either. So withdrawal will bring a peace which is warless, loveless. But what is the point? You have thrown the baby with the bath-water.

Love has to grow. The whole energy that goes into violence, fighting, struggle, war, has to be transformed into love. Peace in itself cannot be the goal. Peace can only be a means to more life, to more abundant life. Peace cannot be the end — just to be peaceful is meaningless, it leads nowhere. It will not satisfy you just to be peaceful — then what is the difference between being dead and peaceful?

Withdrawal brings a peace that is suicide. Yes, you go to the Himalayas, you live in a cave, you are peaceful — because there is no possibility to fight with anybody. You have not changed at all, you have only changed the circumstances. You are the same person. If circumstances arise, you will go to war, you will fight. You will become angry if somebody comes and insults you.

You may have lived for thirty years in a cave in the Himalayas and somebody comes and insults you, and you will be surprised that anger comes back. Thirty years won’t help; the anger was waiting there for the right season. Now somebody has insulted — the spring has come, and the anger blooms. And in a single moment all those thirty years of withdrawal have disappeared.

The escapist is a coward; he has no courage. He is closing his eyes because he has become too much afraid of the world. His logic is that of the ostrich. That is not very human; that is very very below human. That is a little bit stupid. Just by closing your eyes nothing changes; the world remains the same. You can believe that everything has changed, because you cannot see anything any more. Your house is on fire, and you can sit with closed eyes and you can believe that the house is not on fire and everything is okay. You can create a kind of auto-hypnosis — and of course you will not be disturbed. But open your eyes, and the house is on fire.

That integration is what I call real peace. PEACE OF MIND CAN BE GAINED BY WITHDRAWAL FROM THE WORLD… No, it has never been gained and it can never be gained… BY STILLING THE VORTICES OF THE MIND. No. By stilling the mind you can simply force the mind to be peaceful. It is a kind of repression.

Silence is not stillness. Silence happens. Stillness is managed, stillness comes out of control. A man sits controlling his body in a yoga posture, forcing his attention somewhere — on Krishna, on Christ; repeating a mantra — aum, ram, anything — somehow managing, trying to manage to remain concentrated. This man is just creating a false substitute.

The real silence is not forced at all. The real silence comes out of understanding. You understand why the mind goes on making noise, you look into it, you watch it: Why? You go into its noises — they must have some message for you. You go into its dreams — even if they look absurd they must be conveying something from the unconscious to you. Just by cutting those messages you are not going to grow — because you are cutting your own unconscious. When you still your mind you are doing one thing: you are stilling your unconscious. You are saying, ‘I don’t want to hear.’

There have been sects — Christian, Hindu, Jaina, and a thousand others — sects of masochists. Sects who have been torturing their bodies like anything; neurotic people. If you torture too much you make the mind very afraid. The afraid mind becomes still. It says, ‘Okay. I will keep quiet.’ But can a song be born out of this quietude? Can there be a dance, can there be a celebration out of this forced silence? There cannot be.

That’s why your saints miss songs. Your saints look sad, dull, dead. You will find dust in their eyes, not radiance. You will not find flowers blooming in their heart, no. No white lotuses grow in your so-called saints’ hearts. They are just deserts — dead, dry, no juice flows.

I am not for it. That is not my cup of tea, I don’t purchase it. And I would like you to understand very deeply, because people who go on the path always fall into this trap. It seems easier. Without understanding the mind, just force it. To understand seems to be a longer way. But there are no shortcuts.

And then one day, when you have understood all the messages of the mind, the mind becomes silent. Because there is nothing more to say. It has been heard; it has reached to the master. Then the mind becomes silent on its own accord. It falls silent without any effort on your part, effortlessly falls into silence. Then silence has a beauty, then silence is a benediction.