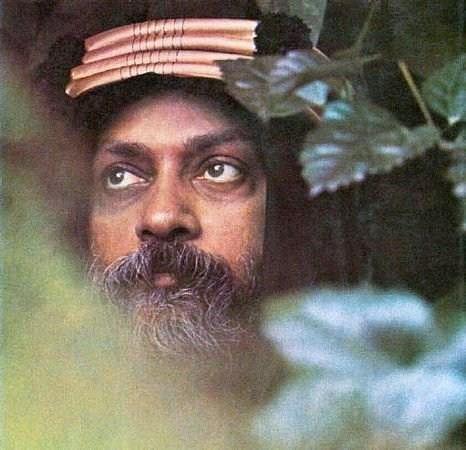 Question : Osho, Actually, i love to philosophize. What to do with that ability in a place like this?
Osho : Deva Anurati, PHILOSOPHY IS A SHEER WASTE of your energy. The same energy can become your meditation, the same energy can become your awakening. Philosophy is like dreaming: you can dream beautiful dreams, but dreaming is dreaming. You can think of God, but to think of God is not to know God. To know about God is not to know God. The word “about” means around. You can go on around and around… you will be moving in a circle and you will never reach the target, because the target is the center not the circumference.

Philosophy is circumferential, peripheral. It can deceive you; it has deceived millions of people because it talks about love, about God, it even talks about meditation. It philosophizes about everything. But philosophy means that your mind remains your master; it is mind that philosophizes. You have to go beyond mind, Anurati — and it is not going to happen through philosophy. It can happen only through
meditation.

Now you must be philosophizing about meditation: what it is, how to define it. There are thousands of definitions and you can be lost in the jungle of definitions. And I can understand your difficulty. You must be feeling a little out of place, because here philosophy is debarred. I am creating a non-philosophical atmosphere. The whole effort here is to help you go beyond mind. I don’t want you to think about love, I want you to love. I don’t want you to think about God, I want you to KNOW God, to BE God.

What is the point when you are thirsty to go on thinking about water? Even if you discover by your thinking that water consists of H20, that is not going to quench your thirst. And that’s what philosophy is: H20. You are thirsty, and philosophy says, “Don’t be thirsty. Water is simply H20. Just write H20 on the paper and eat the paper!”

Philosophers go on eating the papers. They eat great things: Upanishads, Vedas, Korans, Bibles. They have a great appetite for paper! That’s why there is such a shortage of paper in the world: there are so many paper-eaters. Crazy people! Yes, once in a while philosophy may be good, just for a change.

Molly Landau was learning to drive a car. Regrettably, as it turned out, she thought she already knew how so she dismissed her driving instructor and ventured forth upon the public highway, unaccompanied by either an experienced hand or a driver’s license.

As she wobbled in an uncertain course along Southern Boulevard in the Bronx, a milkman driving a well-behaved horse turned a corner. Mrs Landau tried simultaneously to do several things: apply the brakes, avoid a collision, turn out, turn in, veer left, veer right, speed up, slow down, and who knows what else. The “what else” was that she banged squarely into the side of the milk-wagon, leaving it turned over on its side in the middle of the street, with the horse and driver entangled in the wreckage.

The lady, losing her head, at the same time lost control of the car. She sped away, swerved out of sight and on squealing tires she circled the block. A minute later she reappeared at the scene of the accident, still wrestling with the steering wheel. The dairyman, who had managed to extricate himself from the mess, was cutting his struggling horse loose from the twisted harness when he heard the clatter and roar of an approaching, wide-open engine. He looked up to see the same car and the same woman again bearing down on him. Just in time to save himself, he jumped aside.

There was a second crash and once more the green motorist proceeded on her devastating way. But now the capsized wagon was a total loss. The milkman was a natural-born philosopher. As he stood in the midst of the ruins, he shrugged his shoulders and remarked to the curious citizens who had gathered around, “About that lady’s driving, I can’t say she’s an expert. But you have to give her credit — she’s thorough!”

Yes, in such situations, a little philosophy is good: it helps you to keep cool. But more than that it is of no use, Anurati. You will have to learn a new way of being. If you are here — and you are here — stop philosophizing. Start experiencing, because it is only through experience that one comes to know the truth.

Truth is not a conclusion arrived at by logical argumentation, truth is not arrived at through syllogism, truth is an experience of a silent, still consciousness. Learn to be more silent and still. This is the first question from Anurati that I am answering. She must have asked hundreds of questions — I go on throwing them away. The moment I see Anurati’s name, the question goes into the wastepaper basket for the simple reason that I don’t want to nourish her philosophical mind. If I start talking about her philosophical problems she will get more and more into them.

She goes on asking me, “You answer everybody’s question. Why don’t you answer my question?” So today I decided that at least one question should be answered.

Philosophy is a disease — and I know it first-hand! I have been a professor of philosophy — you can trust me! I have suffered from it and I know it is very chronic. Once it enters into your system it is very difficult to throw it out. I have every sympathy for Anurati, but if the right effort is made you can get rid of it; it is not incurable. And because it never gives you anything… It promises much, but it never supplies any goods.

Just look back. What has it given to you? It makes people great bullshitters, that’s all! They go on talking about great things they know nothing of. It may give you a very polished ego, but this is the problem that has to be solved, it is not the solution.

Anurati, wake up from your philosophical dream! Howsoever sweet it is, it is a dream. And it is so useless that you can always find an argument for anything. Philosophy is a prostitute: it can go with anybody. Meditate on Murphy’s maxim: To every Ph.D. there is an equal and opposite Ph.D. You can argue for, you can argue against. Philosophy has no anchor. It is a game, like chess: it keeps you occupied and gives you a sense of doing something great. But remember, it is all dreaming.

One night Zorba the Greek dreamed that he had to leave his island. So he went down to the port and stepped aboard a boat. The captain stopped him and said, “You’ll have to pay one hundred drachmas.”
“That’s sheer robbery!” exclaimed Zorba. “I won’t give you more than fifty drachmas.”
“One hundred or you will have to swim!”
“Is that so?” Zorba said. “You better take me for fifty drachmas or I’ll wake up and you’ll lose everything!”

One night Mulla Nasruddin dreamed that a man wanted to give him some money. He was very generous, but Mulla was insistent, “Give me a hundred rupees.”
And the man was saying, “Take ninety… ninety-one… ninety-two… ninety-three.”

But Mulla was insistent on a hundred rupees because Mulla could see that the man was so generous, he looked so kind that he might agree on a hundred rupees, so why settle for less?
The man said, “Listen. For the last time, take ninety-nine.
Mulla said, “One hundred!” But he said it so loudly that he woke up. He opened his eyes — the man had disappeared and the money had disappeared.

You are dreaming beautiful dreams. Philosophy is a very clever dream. Anurati, get out of it! And this is not the place to philosophize; you can do it anywhere else. Such stupid things can be done anywhere. For such stupid things you need not come from America to India! Do something real, do something authentic. Do something that will transform your life, that will give you a new birth. “Unless you are born again you cannot enter into my kingdom of God.”

Osho – Why we don’t feel the divine which is here/ now, within/without