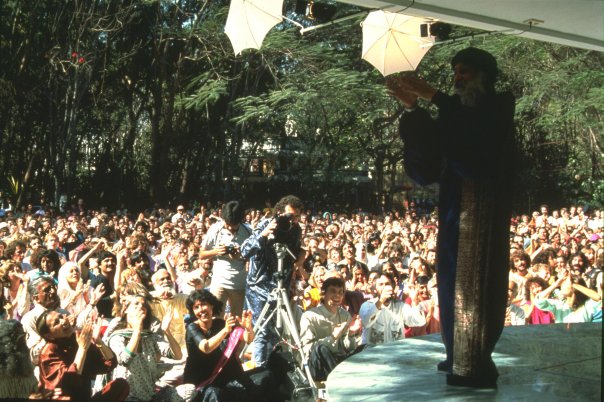 In a rare TV interview, while he is in silence, Osho is asked: What is your vision for the future of Rajneeshism?

Osho : Rajneeshism is not a religion like Christianity, Hinduism, Mohammedanism, Buddhism, etc. The name should not be misunderstood. It simply shows a poverty of language–to be exactly true, Rajneeshism is a religionless religion.

In other words it is a kind of religiousness, not a dogma, cult or creed but only a quality of love, silence, meditation and prayerfulness. Hence it can never end.

It is not beginning with me. It has always existed and it will always exist. It is the very essence of human evolution, of culture consciousness.

Buddha, Jesus or Krishna are nothing but expressions of this spirit, but it was not possible in those days for religion to be manifested as well as it can be now. Because Jesus did not know about Buddha, Buddha did not know about Lao Tzu, and Krishna was also unaware of Lao Tzu, etc.

I have traveled all the paths and have looked at the truth from all the windows. What I am saying is going to last forever because nothing more could be added to it.

Buddha was not so sure of his religion. He said that his religion would last for 5,000 years, and that too only if he didn’t allow women to join his commune. And when women entered his commune he said, “Now the religion will only last 500 years”.