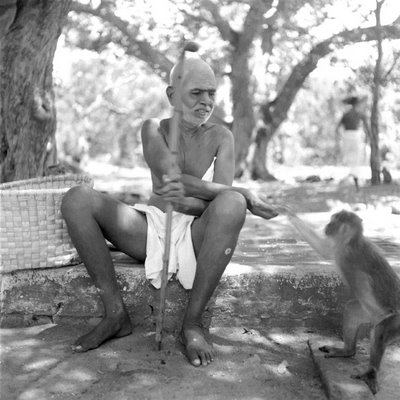 But do not deceive. You can deceive – you can slightly move the body. Do not move. If some mosquito is there, then treat the body as if it is dead. It is one of the most used techniques. Raman Maharshi attained his enlightenment through this technique, but it was not a technique used by him in his life.

In his life it suddenly happened, spontaneously. But he must have persisted with this in some past life, because nothing happens spontaneously. Everything has a causal link, a causality. Suddenly one night Raman felt – he was just young, fourteen or fifteen at the time – that he was going to die. And it was so certain in his mind that death had taken over. He couldn’t move his body, he felt as if he was paralyzed.

Then he felt a sudden choking, and he knew that now the heart was going to stop. He could not even cry and say to another, ”I am going to die.” Sometimes it happens in some nightmare – you cannot cry, you cannot move. Even when you become awake for a few moments you cannot do anything. That happened.

He had absolute power over his consciousness, but no power over his body. He knew he was there, that he was present, conscious, alert, but he felt he was going to die. And the knowledge became so certain that there was no other possibility, so he just gave up. He closed his eyes and remained there, just waiting to die; he waited there just to die.

He escaped from the house. That death experience changed him completely. He became one of the very few enlightened persons of this age. This is the technique. This happened spontaneously to Raman, but it is not going to happen spontaneously to you. But try it. In some life it may become spontaneous. It may happen while you are trying it. And if it is not going to happen, the effort is never wasted. It is in you; it remains in you as a seed.

Sometime, when the time is ripe and the rains will fall, it will sprout. Every spontaneity is just like this. The seed was sown some time ago, but the time was not ripe; there were no rains. In another life the time becomes ripe. You are more mature, more experienced, more frustrated with the world – then suddenly, in a certain situation, there are rains and the seed explodes.