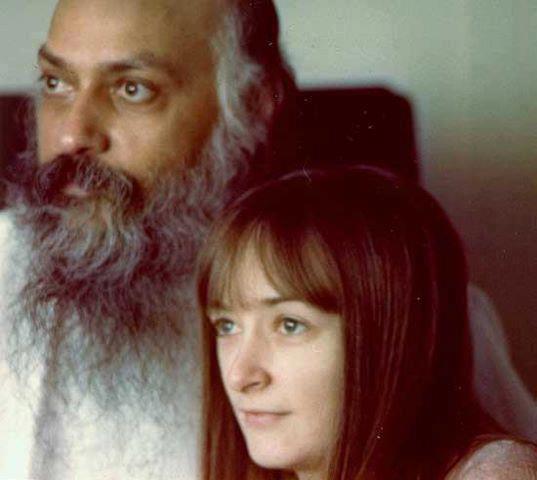 Relationship means something complete, finished, closed. Love is never a relationship; love is relating. It is always a river, flowing, unending. Love knows no full stop; the honeymoon begins but never ends. It is not like a novel that starts at a certain point and ends at a certain point. It is an ongoing phenomenon. Lovers end, love continues. It is a continuum. It is a verb, not a noun. And why do we reduce the beauty of relating to relationship? Why are we in such a hurry? — because to relate is insecure, and relationship is a security, relationship has a certainty. Relating is just a meeting of two strangers, maybe just an overnight stay and in the morning we say goodbye. Who knows what is going to happen tomorrow? And we are so afraid that we want to make it certain, we want to make it predictable. We would like tomorrow to be according to our ideas; we don’t allow it freedom to have its own say. So we immediately reduce every verb to a noun.

You are in love with a woman or a man and immediately you start thinking of getting married. Make it a legal contract. Why? How does the law come into love? The law comes into love because love is not there. It is only a fantasy, and you know the fantasy will disappear. Before it disappears settle down, before it disappears do something so it becomes impossible to separate.

In a better world, with more meditative people, with a little more enlightenment spread over the earth, people will love, love immensely, but their love will remain a relating, not a relationship. And I am not saying that their love will be only momentary. There is every possibility their love may go deeper than your love, may have a higher quality of intimacy, may have something more of poetry and more of God in it. And there is every possibility their love may last longer than your so-called relationship ever lasts. But it will not be guaranteed by the law, by the court, by the policeman.

Gandha, forget relationships and learn how to relate. Once you are in a relationship you start taking each other for granted. That’s what destroys all love affairs. The woman thinks she knows the man, the man thinks he knows the woman. Nobody knows either. It is impossible to know the other, the other remains a mystery. And to take the other for granted is insulting, disrespectful.

To think that you know your wife is very very ungrateful. How can you know the woman? How can you know the man? They are processes, they are not things. The woman that you knew yesterday is not there today. So much water has gone down the Ganges; she is somebody else, totally different. Relate again, start again, don’t take it for granted.

And the man that you slept with last night, look at his face again in the morning. He is no more the same person, so much has changed. So much, incalculably much, has changed. That is the difference between a thing and a person. The furniture in the room is the same, but the man and the woman, they are no more the same. Explore again, start again. That’s what I mean by relating.

Relating means you are always starting, you are continuously trying to become acquainted. Again and again, you are introducing yourself to each other. You are trying to see the many facets of the other’s personality. You are trying to penetrate deeper and deeper into his realm of inner feelings, into the deep recesses of his being. You are trying to unravel a mystery which cannot be unraveled.

That is the joy of love: the exploration of consciousness. And if you relate, and don’t reduce it to a relationship, then the other will become a mirror to you. Exploring him, unawares you will be exploring yourself too. Getting deeper into the other, knowing his feelings, his thoughts, his deeper stirrings, you will be knowing your own deeper stirrings too. Lovers become mirrors to each other, and then love becomes a meditation. Relationship is ugly, relating is beautiful.

In relationship both persons become blind to each other. Just think, how long has it been since you saw your wife eye to eye? How long has it been since you looked at your husband? Maybe years. Who looks at one’s own wife? You have already taken it for granted that you know her. What more is there to look at? You are more interested in strangers than in the people you know — you know the whole topography of their bodies, you know how they respond, you know everything that has happened is going to happen again and again. It is a repetitive circle.

It is not so, it is not really so. Nothing ever repeats; everything is new every day. Just your eyes become old, your assumptions become old, your mirror gathers dust and you become incapable of reflecting the other.

Hence I say relate. By saying relate, I mean remain continuously on a honeymoon. Go on searching and seeking each other, finding new ways of loving each other, finding new ways of being with each other. And each person is such an infinite mystery, inexhaustible, unfathomable, that it is not possible that you can ever say, “I have known her,” or, “I have known him.” At the most you can say, “I have tried my best, but the mystery remains a mystery.” In fact the more you know, the more mysterious the other becomes. Then love is a constant adventure.

Osho on reverence and respect for Parents, Relationship between parents and children